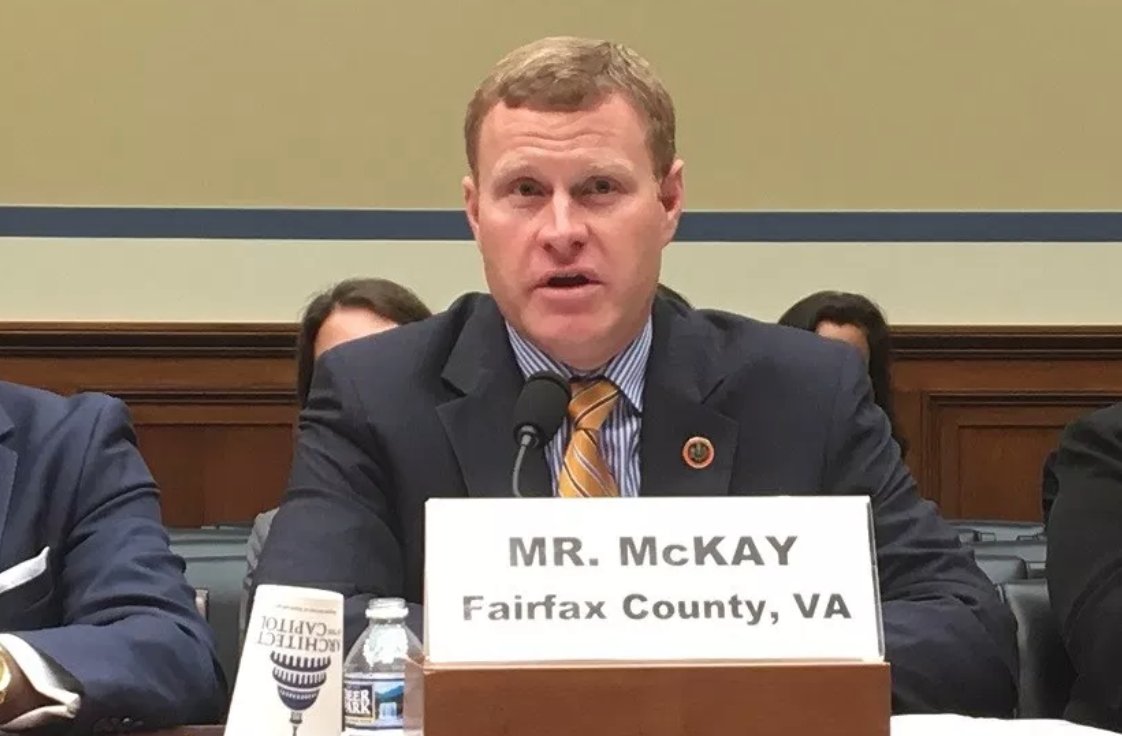 Jeffrey McKay is Chairman of the Fairfax County Board of Supervisors.  His recent emails to the Fairfax County Community have decried efforts by the Governor and General Assembly — the peopleâ€™s elected representatives — to let parents decide if and when their children should wear masks in school.

Chairman McKayâ€™s disingenuous preening about the Board of Supervisors’ decision-making power is both revealing and repulsive.

Revealing because he wants to hold unrestricted power to mask school children, claiming local Supervisors and School Boards should make such decisions.  McKay writes, â€œâ€¦ local school boards working with local health professionals â€¦ should make decisions about local schools.â€  He scoffed at â€œelected officials in distant Richmondâ€ being the ones to set a â€œone size fits all directive that will put our children and teachers at risk.â€  NOW he tells us, after dutifully marching in lockstep with former Governor Northamâ€™s dictates for two long years!

Nowhere in his emails does Chairman McKay even acknowledge the role of parents in their childrenâ€™s education.  In fact, he sounds like candidate Terry McAuliffe.  We see what this mask tug-of-war really is all about.  McKay admits that the General Assemblyâ€™s actions removing local authority to require masks in schools â€œis about so much more than just masking.â€ Say it Mr. Chairman: Itâ€™s about power.  Your power.

McKayâ€™s power grab and sneering elitism are repulsive.  He formulates politically skewed arguments and claims to follow â€œfacts,â€ but consistently fails to cite credible medical data. Such data would contradict his â€œone-size-fits-all-wear-a-mask-and-take-the-shot-or-elseâ€ approach.  School age children (without underlying medical conditions) are not at risk from COVID-19 as much as they are from the annual seasonal flu, and they do not transmit the virus to adults.  But they are at risk for mental anguish and learning disabilities brought on by unmitigated masking.

We no longer have a COVID-19 pandemic.  We have a pandemic of politicians who canâ€™t let go of power.

Over the past two years, weâ€™ve learned a lot about viruses, vaccines, and political power grabs.  Itâ€™s time for Jeffrey McKay, his colleagues, and the school board apparatus to unclench their fists, follow the science and stand back while parents assume their rightful duty to care for their children.

[…] board meetings and prevented from speaking inÂ VirginiaÂ and Pennsylvania .Â  A county boardÂ chairmanÂ in Virginia scoffed at the elected legislature and Governor and said school boards and health […]

[…] school board meetings and prevented from speaking in Virginia and Pennsylvania .Â  A county board chairman in Virginia scoffed at the elected legislature and Governor and said school boards and health […]

[…] board meetings and prevented from speaking inÂ VirginiaÂ andÂ PennsylvaniaÂ .Â  A county boardÂ chairmanÂ in Virginia scoffed at the elected legislature and Governor and said school boards and health […]

â€œPerhaps for the ruling class the only thing that would be more terrifying than seeing children go to school without masks is the idea of losing elections.â€ â€” Grace Curley, The Spectator

The pivot is in full.. it’s astounding to watch the media, paint truly peaceful protests as are occurring in Canada as violent insurrectionists… the Trudeau speech where he enlisted every stupid liberal totalitarian cliche… Johnny shithead and Erica Halfwit probably swallowed that completely… to castigate people who want their freedom back from the Covid exercise in totalitarianism.

But try as they might… the worm is turning on them. The danger for these globalists is that people will wake up to their game in total…

17 States have called for a Constitutional Convention in the US. 24 are considering it… they need 35 to call the convention. It is time to take the country back from scumbags like the Democrat Party and their allies in RINO Inc…

Now there is a headline you might not expect to readâ€¦.

Well then Erica, Pronoun She It… you should be intellectually consistent… ha isn’t that funny… a useful Democrat Idiot like yourself being consistent. You should oppose vaccine mandates and masks and all the associated bullshit. If the Fauci Regime can impose health measures on everyone…
MY BODY MYSELF! Right you little dingleberry NPC?

Did you even read the headline, Tippy? It was the GOP that killed the legislation. This has zero to do with Democratâ€™s position on anythingâ€¦?â€â™‚ï¸

This article is about covid punk. Not abortion so no I didn’t read your headline. My question to you is if you care so much about abortion, then should you be consistent and oppose mandates for covid horse shit?

My pleasant discussion with one of the Democrat Party’s finest useful idiots, Johnny Martin here, led me to share James Kunstler’s thoughts on the future in this polyglot boarding house run by clowns:

“The actual global economy itself â€” the thing that sends, you know, products from one place to another â€” is seizing up like the engine on a beater 1998 Buick Regal. Long about right now, lots of things are not going from point A to Point B, including stuff of a food nature. Itâ€™s starting to irk the home-folks. When all that goes south, youâ€™ll hear no more about Covid-19, systemic racism, the patriarchy, the drag queen story hour, and all the other hobgoblins that infest the Leftâ€™s gospel garden of Wokery. The kryptonite is coming on hard. They are doneâ€¦ and for the moment we are stuck with them running the country.”

It seems that reality is coming down on the clowns that run this circus… Kunstler is right. All that baloney that the elites have pushed for years are going to be up in smoke as the stupid country reaches into the crises that are coming… No one is going to care much about gay weddings once they are in economic crisis…

This article is bullshit. Local control, the gop continuously shouts. Not now, though. Oh………….an shut your ignorant mouth, joker

apparently the author disagrees with you

an you shut your filthy pie hole too Democrat Party useful idiot. No one asks you to come here you fountain of rat urine.

Surely we can be thankful for JOKER — few disgrace their cause to such a degree. The ideal spokesperson for his POV!

I am sure the Branch Covidians, Erica, pronoun She It and Juanita Martin, Pronoun Ella… will be along soon to give their half cent brain comments.. psst… girls… We are pivoting away from Covid now because it is hurting the Bribem administration. You’ve trick or treated out that shit… and at this point you have to run as fast as you can away from covid hysteria because it drags down Bribem’s economy… Hey Erica:
the BIDEN BOOM!!! that is his ass hitting the bottom on approval rating! Ha ha you little turd!!

Has anyone actually challenged him over his hypocrisy? Are there no spine of steel patriots in his district?

Why should we Virginians care what a Nevada teacher has to say?