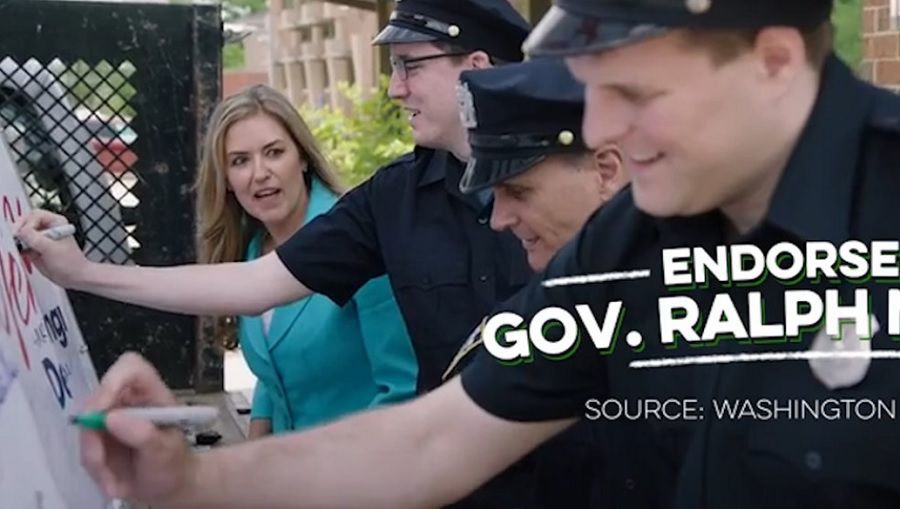 First strike?  She kicked off her campaign with her infamous “fake cop” ad where she dressed up her staff in Party City police costumes.

Second strike?  She skipped every single “National Night Out” held in the 10th District.

Her latest dis?  When the Police Benevolent Association held their interviews last week for endorsements of candidates – Democrats and Republicans alike showed up for the interviews.  But Jennifer Wexton not only was a no show,  she reportedly did not even return their phone calls.

The endorsements have not been announced yet.  Stay tuned.

Every resident of the 10th with valuable properties to protect (expensive houses, cars, etc., not to mention lives, the most valuable possession of all…)needs to be reminded that Ms. Wexton would make it so that those things are open to the hordes. Police are the load-bearing wall of our society. When that crumbles, we have complete anarchy. Somebody needs to make a sign to remind those in the 10th that this is what she is supporting.

Jennifer Wexton is completely disrespectful to local law enforcement not just because she disses their endorsement, but she literally makes their jobs harder with her tracker antics. I am baffled by this stupid behavior of hers – mainly because she continually brags about her work with the CA’s office here in Loudoun and had to have worked closely with our LCSO. Between the ridiculous fake cop costumes, ignoring National Night Out events and now the literal snubbing of the VA PBA endorsement – LEOs know she won’t have their back. Take note law enforcement friends, this lady doesn’t care about you.

The Clintons must be investigated, for that and so much more. The majority of all Americans are vastly opposed to a two-tier system of justice. Good for Ms. Comstock!

So whatever happened to that Foster guy?