On Wednesday Leesburg attorneyÂ Jennifer Wexton declared her candidacy for Mark Herring’s senate seat in district 33. Â Herring has not vacated his senate seat because he has not been declared the winner of the race for Attorney General. Â It’s unlikely that the recount in that race will be finished before mid to late December. Â No winner will be declared until then. Â  That has not stopped Jenny Wexton from declaring that she’s running for Herring’s seat. Â Â Wexton previously ran for Commonwealth Attorney in 2011, losing to Jim Plowman. Â She was previously Jim Plowman’s assistant in the Commonwealth Attorney’s office.

In addition to running for a state senate seat that is occupied, Â Wexton has another problem running in the 33rd district. Â Jennifer Wexton does not live in 33rd district. Â She’s a western Loudoun gal who has lived in the same house with her husband and two young sons for the last 10 years. Â The house is out in the country, off Rt 15, smack in the middle of Dick Black’s district, the 13th senate district, not the 33rd district. Â That would help explain her logo: 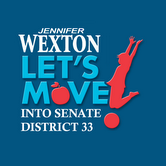 Jennifer Wexton is running for a state senate seat that hasn’t been vacated in a district she doesn’t live in!

Former Delegate Joe May would face the same problem as Jennifer Wexton. He too lives off rt 15 and has for over 30 years. He too is in Dick Black’s district. As much as Joe May wants to be back in the General Assembly, he will have to find another route.

Too bad Jennifer Wexton didn’t move down to Ralph Northam’s district, then there would be a chance we’d be rid of her for good in Loudoun.

Jeanine,
You are right: no one should be announcing yet. But we need chatter. Right now I’m expecting this seat to remain in the hands of Dems because no one is prepared to run.

Living outside the district in a VERY established home is a serious problem. Anyone in the district ready to rise to the challenge if necessary? Perhaps a woman with my favorite initials [P/P]??

I have someone in mind who will make a great candidate, young, energetic, well liked, and a solid conservative. Stay tuned!