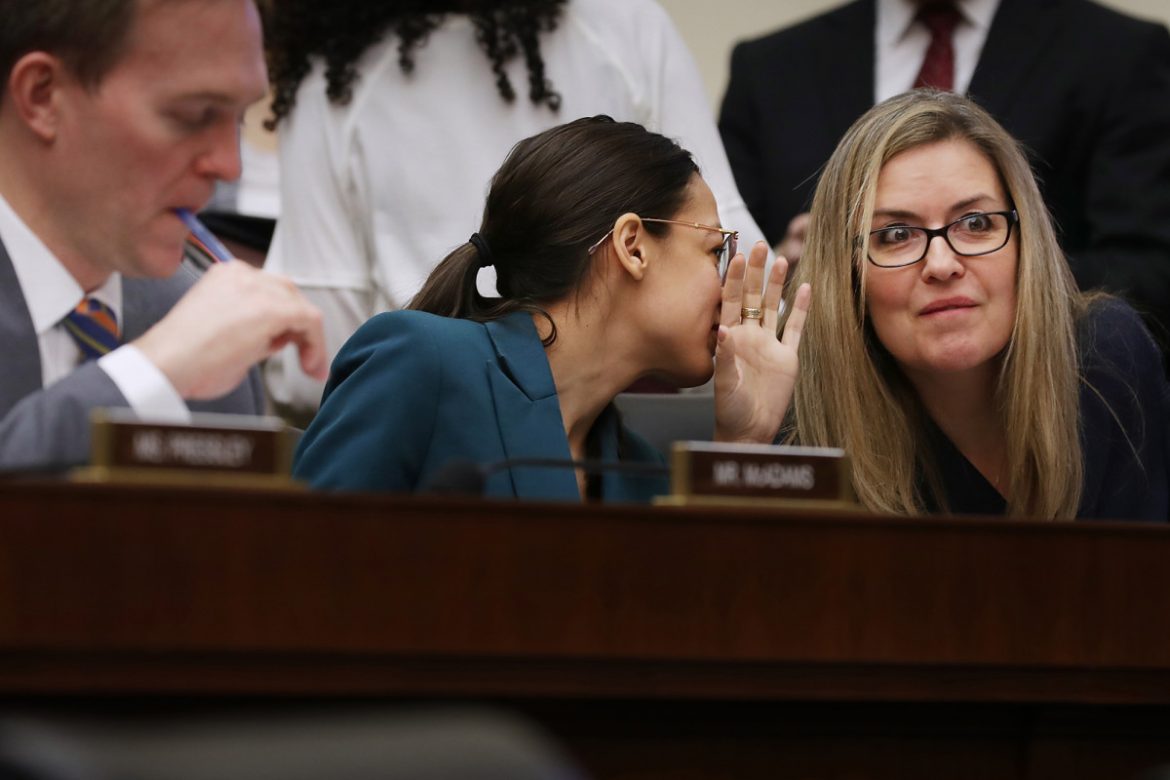 Congresswoman Wexton (on the right) and AOC (Getty Images)

After declaring her candidacy in April 2017, Wexton held a series of town halls across the district to take the pulse of her potential constituents, notably at a time when then-incumbent Rep. Barbara Comstock seemed to be avoiding such public meetings.

What a difference two years make.  The Jennifer Wexton who stood before yesterday’s town hall audience at Goshen Post Elementary School in Aldie was in command of a myriad of topics, confident in her body language, gracious, fixed her eyes firmly on audience members and questioners, and only stopped once in two hours to take a sip of water (when Delegate John Bell stepped to the podium to explain how the VA Assembly voted to conform VA law to the new federal tax code).

To begin the program, Delegate John Bell invited a local Cub Scout troop to parade the colors and then lead the audience in the Pledge of Allegiance.  He welcomed everyone and asked that we be respectful of one another, even during the Q&A time, if we did not agree with something someone said. The audience responded with applause.

Next, Del. Bell introduced Rep. Wexton.  She first asked for a moment of silence in memory of the people killed at the recent mosque attack in New Zealand.  After thanking the local Sheriff’s office for their presence and the Scouts for their participation, she moved into her presentation, adeptly navigating the legislative waters to portray herself as a bi-partisan solution finder, even while taking oblique jabs at President Trump and Mitch McConnell.

To summarize her introductory remarks:  The government shutdown hurt constituents; she serves on the Financial Services Committee and the Science, Space & Technology Committee (the “fun committee”); she is proud of her co-sponsorship of HR 8 (requiring new background checks for firearm purchases) and recognized Moms Demand Action for Gun Sense sitting in the audience; she wants to bring down healthcare costs and recognized the group “Little Lobbyists” in the audience who advocate for children with complex medical needs; she declared that the environment has “pretty much been ignored over the last decade” (during the age of Obama?!?) and wants “evidence and fact-based solutions” to climate change; she proudly co-sponsored HR 1 (For the People Act) to make it easier to vote and get “dark money out of politics” (which Mitch McConnell has dubbed the Democrat Politician Protection Act); and she greatly enjoys her monthly bi-partisan, bi-cameral lunches with fellow Representatives and Senators from Virginia.

Toward the end of her recitation, Rep. Wexton got off her game for a moment when she spoke about the “unanimous” vote in the House to make the Mueller report public.  She said the vote was 230-0, then paused with a deer-in-the-headlights look, realizing that she had the number wrong, perhaps trying to remember how many Members of the House there are.  She then blurted out “430-0” and seemed satisfied enough.  There are 435 Members of the House.  The vote actually was 420-0  (with some Members not voting or voting “present”).

Then it was time for Q&A.  For the most part, it was a cordial back-and-forth, punctuated by outbursts of applause at appropriate times to express agreement with the Democrat platform.  Wexton demonstrated her skill at pivoting from difficult questions, while maintaining a calm composure throughout.

Here are some highlights —

** Wexton was asked about Gov. Northam and “blackface.” She re-stated her position that he should resign. [audience quiet] Then she went on to talk about her trip to Selma, AL with civil rights leaders. [audience applauded]

** A man of Indian background asked that skilled immigrant visas be protected to “keep the American dream alive for immigrants.”  He really didn’t ask for any response, and Wexton didn’t really give one that I can remember, other than to acknowledge his concerns.

** She is “absolutely opposed to drilling off Virginia’s coast.”

** An engineer spoke politely to point out that the Green New Deal is “a little overly enthusiastic” in its objectives.  He called for a careful analysis and science/fact-based solutions.  Wexton simply nodded her head.

But in response to another questioner, Wexton described the Green New Deal as more “aspirational” in its current form. Later she said that with “McConnell in the Senate and Trump in the White House, the Green New Deal won’t get through. We’re working in other ways to move forward with tax credits and subsidies for renewables.”

** A student spoke in favor of reducing the burden of student loans.  Wexton responded by blaming the “DeVos Dep’t of Education” for “moving backward” (without defining what that meant).  She wants to protect federal subsidies and vehicles for borrowing.

** A Jewish man concerned about Rep. Ilhan Omar’s recent anti-Semitic remarks said he “expects this business of anti-Semitism from the extreme Right, not from the extreme Left.”  Wexton handled him adroitly, with well-rehearsed talking points.  Said she, “It’s not just anti-Semitism, it’s Islamophobia, it’s racism, folks who are trying to divide us.  We have diverse communities in northern VA.  I go to the ADAMS Center a lot … and to synagogues.  We have a bi-partisan, multi-faith community.”  [applause]  She went on to talk about the bi-partisan resolution that passed the House condemning all hate.  Finally, she declared that Ilhan Omar herself has been a victim of Islamophobia. (I wonder what the Jewish man who asked the question thought about her rambling answer replete with moral equivalence.)

Wexton added that “a lot of this kind of speech comes from the top,” identifying President Trump and singling out his remarks about Charlottesville, Latino immigrants and his “Muslim ban.”  [dog whistles]

** A Navy veteran suggested that the country re-consider the draft to make military service something shared by lower, middle and upper classes alike in our society. [applause] Wexton simply nodded.

** Another man said his wife is from “another country” and explained how they have waited many years and spent thousands of dollars following the law for her to become a legal citizen.  He thinks they might deserve a refund for that money spent [laughter and some applause] because illegal immigrants are getting into the country and being given all sorts of public assistance.  He was very polite and obviously sincere.  Wexton admitted that there are “real issues with illegal immigration,” but then curiously went on to say, “I haven’t seen anything on my side of the aisle that encourages that.” (WHAAAT??)  Then she quickly pivoted to how we must process visas more quickly and need “comprehensive immigration reform.”  It was one of those moments when you wonder how legislators like Wexton develop such hubris and, actually, a disdain for law-abiding people asking a legitimate question.

** A veteran asked why Wexton replaced the POW flag outside her office with the transgender flag, since there are countless POWs still missing.  Wexton replied that she wants to support members of the transgender community who have come under attack.  [loud applause]

** Perhaps the saddest moment of the afternoon was when a high school senior spoke.  She seemed quite fragile talking about the time she thought she heard a gun fired in school, but it turned out to be her imagination because she was so frightened by the potential for gun violence.  [applause] Then she broke down in tears when she questioned how Gov. Northam could support infanticide.  [no one applauded, including, I’m ashamed to say, me; I typically do not applaud during these events.]  Wexton’s response to the gun issue was simply that she was “fighting for gun legislation.”  On the topic of infanticide, Wexton was absolutely shameless, claiming, “the media portrayed a misrepresentation of the facts.”  She said it is an “extremely horrible decision that a woman has to make when a baby is not viable or for her own health,” adding that the government should not be involved in such a decision.  [loud applause]  If it’s one thing Wexton knows, it’s her talking points.

** I had the opportunity to ask this question: “Women candidates, like yourself, frequently tout their ‘independent voices.’ I applaud that.  And so I was puzzled to see the display of so many Congresswomen at the State of the Union all dressed in white, popping up and down like puppets on Nancy Pelosi’s strings.  How was that a statement of your independence?”  Her answer:  She and her Democrat colleagues were displaying their support for women’s suffrage while proudly calling attention to their diversity. The audience applauded loudly, and that’s when I interrupted Rep. Wexton, turned to the audience and reminded them that we were asked at the beginning of the program to be respectful to one another even if we did not agree with a question.  Wexton concluded by stating that she did not agree with my assertion that she and her colleagues were following orders from Nancy Pelosi, yet to anyone watching on television that night, it was painfully clear they were.

** The last questioner before the event ended promptly at 1 PM was a high school junior who claimed that Betsy DeVos is pushing the privatization of all schooling.  “Teachers are treated worse in general” in privatized schools, he asserted.  [applause]  Wexton declared that she is a product of public education all the way through law school and that, “we’re fighting back against the DeVos Administration.” But she then deftly pivoted, acknowledging that “private schools are a great option for some students,” and that much policy making takes place at the state and local levels when it comes to education.

Two years after declaring her candidacy for the House of Representatives, Rep. Wexton is ready for prime time.