Jo-Ann Chase is a long time member of Loudoun County Republican Committee who has also served on the executive board of the committee.  She has been a member of our State Central Committee, and a republican candidate for delegate just 2 years ago.  One would expect her to be a strong republican, strongly supporting our candidates.  Right?  Well, anyone who thought that would be wrong.  She is supporting only one candidate in this election and that candidate is democrat John Bell, a candidate for the House of Delegates in the 87th district.  Below is a picture of Jo-Ann’s house with her support for Bell prominently displayed.  Please note her lack of support for any other candidates, not even Ken Cuccinelli. 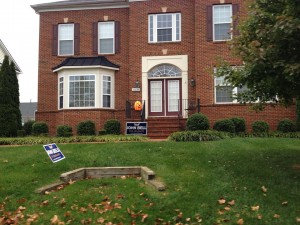 John Bell is running against Delegate David Ramadan, one of the hardest working delegates in Richmond.  In his first term in office Delegate Ramadan sponsored 12 bills and cosponsored 87 other bills, ALL of which became law.  That is a remarkable record for a first term delegate.  He also stood up for all of us, against incredible pressure, to vote against the transportation tax bill because he knew that it was bad bill, it would not improve transportation in Loudoun county, and it would increase taxes on every taxpayer in the state.  Taxpayers in his district had additional tax burden written into this bill.  He stood up to a Governor who helped elect him, and many members of his own party to do what was right for his constituents.  No one in Richmond cares more about the people of his district than David Ramadan and he has proven that over and over.  David has fought for us, for our liberties, for our 2nd Amendment rights, to keep our taxes low and to keep the government out of our lives.

Meanwhile this so called conservative Jo-Ann Chase is supporting David Ramadan’s opponent, a man who is running a nasty, bigoted campaign, fueled with money from Obama supporters and pro abortion zealots.  Why is Mrs. Chase doing this?  Petty spite and vindictiveness fuels her for one simple reason,  David Ramadan beat her in a primary for the 87th district in 2011.  That is her sole reason for abandoning  all the principles she has supported over a lifetime in politics.

Can Mrs. Chase still claim to be a republican and participate in party politics?  Not according to the plan of Republican Party of Virginia:

ARTICLE I
Participation in Party Actions
SECTION A. Qualifications
1. All legal and qualified voters under the laws of the Commonwealth of Virginia, regardless of race, religion,
national origin or sex, who are in accord with the principles of the Republican Party, and who, if requested, express in
open meeting either orally or in writing as may be required their intent to support all of its nominees for public office in
the ensuing election may participate as members of the Republican Party of Virginia in its mass meetings, party
canvasses, conventions, or primaries encompassing their respective election districts.   (Emphasis is mine.)

By supporting Delegate Ramadan’s opponent, Jo-Ann Chase has disqualified herself from being a member of the Republican Party of Virginia.  Goodbye and good riddance to a petty, small minded, bigoted, nasty, woman.

If you are as offended by Jo-Ann’s actions as I am, please consider supporting a fine man for the House of Delegates, David Ramadan, by contributing to his campaign here.

David Ramadan is a supporter of the Ground Zero Mosque in New Hork and has attacked Newt, Sarah Palin and other prominent Republicans for their opposition to the mosque. Isn’t it hypocritical for David and his munchkins to be attacking Mrs. Chase for not supporting Republican candidates allied with David?

Ramadan is a covert Islamist. I do not care what he has said, he grew up in a Muslim environment and Taquiyya is their way of infiltrating our culture.
Seek out “Act for America” to become more informed about how the Islamist will infiltrate our culture.

Many of those who claim to support David’s opponent on the issue of abortion are full of crap.They don’t have the courage to tell you why they really don’t want to support David. You see they don’t like David because his last name is Ramadan. They believe because David may be something other than a Christain, that he is not to be trusted, and should not run for public office. The simple fact is these people are bigots. Given that the vast majority of bigots have an IQ equal to 8 pounds of seedless grapes, we should be glad JoAnn will no longer be associated with our party. She does not represent our conservative values, and is better qualified to support the party of high taxes, vaginal probes and Obamacare.

I had a difficult time confirming, was this article written based on actual conversations with Mrs. Chase or only based on the sign posted in her yard? I happen to have personally been victim to sign changes and theft in the past and want to make sure that these accusations are solidly based in fact and not assumptions.

The signs were up for quite some time. On top of that, it seems Mrs. Chase went around stating to others that she was supporting John Bell, and would be voting for him.

Rachel Sargent, a formerly active Republican, has also openly stated her support for John Bell because David Ramadan is ‘not pro-life’. Not sure why she feels that Planned Parenthood candidate John Bell is a better choice.

Rachel Sargent probably should up her dosage. She is quite a hateful individual.

Good article, but Chase is not alone. John Andrews a former GOP Senate candidate and school board member is supporting Mark Herring; Clint Goode, a former school board candidate and LCRC member, is publicly endorsing Mary Daniel, a Dem, over Dave Larock. The list goes on and on.

I seriously doubt we will ever see Mr. Goode or his cousin Mr. May at another LCRC meeting. John Andrews surprises me.

The question is, if we do see Mr. Good or Mr. May at an LCRC meeting again, or if they attempt to reapply for membership next year as required – will the LCRC give them the status? I suspect the other so-called republicans mentioned on this site are not active members.

I assume the house is also tied to Clay and therefore also excludes him from any party activities.

That would be my assumption as well.