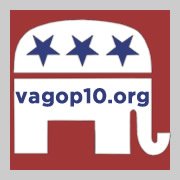 The Committee will vote at their next meeting to fill the seat left vacant by Jo Thoburn, the Presidential seat.

Well we in the 10th that live across the mountain can only hope that redistricting will free us from this Fairfax mob, hopefully sooner rather then later, and someone keeps our new district chairperson away from a twitter account in the interim.

her hateful tweets (directed at Republican candidates) are the talk of FB. The WaPo article said the tweets could have been made by her children or her staff at the Christian school. Will SCC remove her for these comments?