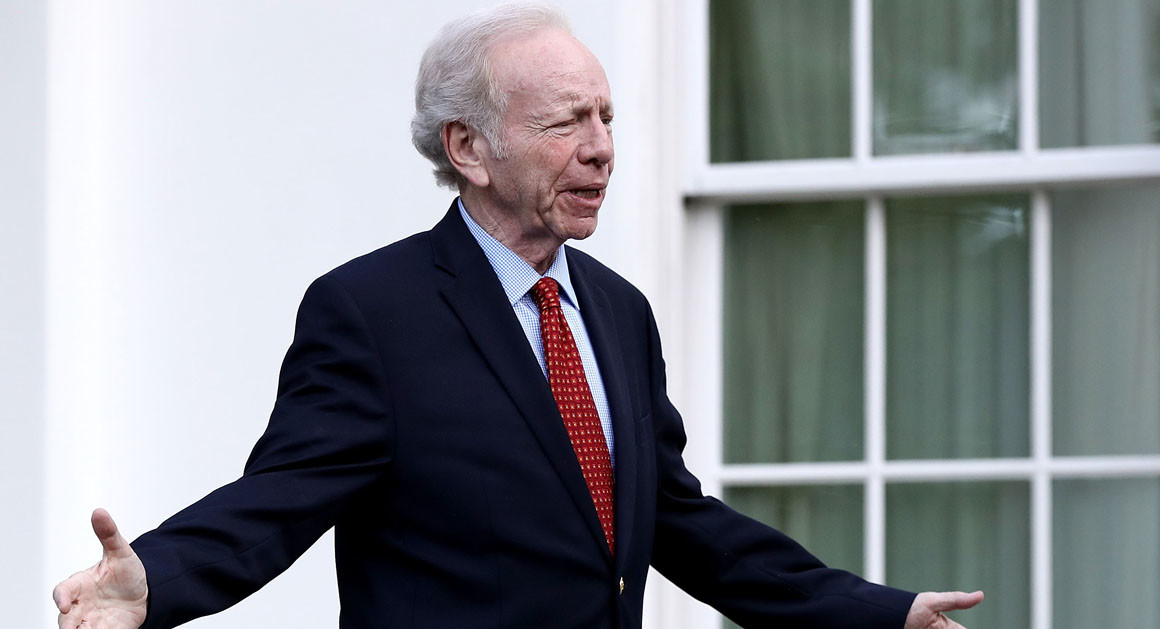 On Thursday multiple sources reported the President will soon nominate former Senator Joe Lieberman to replace James Comey as the director of the FBI.  More on the story here, here, and here.  This is such a bad idea that I hardly know where to start.

The first thing that comes to mind is Lieberman is a life long Democrat politician from Connecticut.  Lieberman was a Senator from 1989 until 2013. He ran for Vice President on the 2000 Democrat ticket.  He ran for President in 2004 but was not the nominee.  Why would we want a career politician as director of the FBI?!  Terrible idea.

Lieberman retired from the Senate in 2013 at age 71, which brings up the next issue, Lieberman’s age. Lieberman is now 75 years old. FBI director is a 10 year appointment and a very demanding job.  Does a 75 year old have the stamina to be FBI director?  How ’bout an 85 year old?  Not to be ageist, but this job is too important, and too demanding, for someone of Lieberman’s age.

Then there’s the problem of Democrats in the Senate.  The Senate needs to confirm Lieberman. Republicans aren’t likely to support a career Democrat politician and many democrat Senators don’t like Leiberman and won’t support him.  From Politico.com:

Some Senate Democrats hold a grudge against Lieberman for his rightward turn and opposition to some of President Barack Obama’s agenda late in his Senate career. Others say even though they respect Lieberman, the job of FBI director should not go to a former politician. And all Democratic senators interviewed for this story said the former Connecticut senator lacks the kind of experience needed for the post.’

“I don’t think there’s going to be much excitement about that from our side of the aisle. Not because we don’t respect Joe Lieberman. But we need a law enforcement professional, not someone who’s run for office before,” said Sen. Claire McCaskill (D-Mo.). “We don’t need anyone who’s put on a red shirt or blue shirt — or who’s campaigned for president.” Lieberman ran for president in 2004.

Some left leaning (RINO) Republicans in the Senate will support Lieberman:

Republicans are lining up behind Lieberman, who left the Senate in 2013 after four terms. Sen. Susan Collins (R-Maine) called him a “person of unquestioned integrity and that’s what we need.” Added Sen. Lindsey Graham (R-S.C.), who has spoken to Lieberman about the job: “If the president picked Joe Lieberman he’d be doing [the] country a good service and, I think, the FBI a good service.”

Joe Lieberman for FBI Director? Worst. Idea. Ever. was last modified: May 19th, 2017 by Jeanine Martin

Joe Lieberman withdraws from consideration for FBI director – The Bull Elephant May 29, 2017 at 3:04 pm

[…] Former Senator and candidate for President, Joe Lieberman, one of four men being considered by Trump to lead the FBI, has withdrawn his name for consideration.  Lieberman had been considered the front-runner to fill the post. (We previously reported why Lieberman for FBI director was the worst idea ever.) […]

Did you ever get that WTF FEELING?

I- 2nd through infinity the motion
Is Trump losing his mind?

Giuliani is waiting to prosecute crimes

This is why, in the end, I think Trump will keep McCabe on. He’s an career FBI guy so that might make the troops happy and he should get confirmation with less resistance from Democrats.

McCabe is a partisan hack.

When I heard this, my first thought was: Has April 1st come around again?

Forgetting the fact that Lieberman has 0 law enforcement experience, being FBI Director is a 10 year commitment. Is he really going to stay on the job until age 85?

Those sources deserve to be completely skewered after this does not occur, too ridiculous even for Trump.

You don’t drain a swamp by adding swamp creatures to it.

The state of the parties in 2017… The Democrats are so hysterically radical that they won’t even accept a Democrat for the position. The Republicans are so inept that they appoint a special prosecutor for baseless allegations, and while tripping all over themselves trying to make the Dems happy, they still can’t get it right.

No way I’d support Lieberman. This is no doubt coming from Kurshner.

Why? I’d be surprised if Kurshner knew a thing about Lieberman.

Then I guess that you don’t know much about either one of them? You should do your homework.

Go ahead, please enlighten everyone. Thanks!