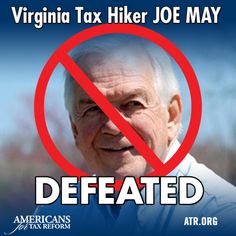 The Bull Elephant has learned that former Delegate Joe May—who was ejected from his seat in a 2013 primary challenge—is now planning to challenge Dick Black for the GOP nomination in Virginia’s 13th Senate district. And if that doesn’t work, he may have Terry McAuliffe’s endorsement as an Independent.[read_more]

From 1993 until 2013 Joe May represented the 33rd district in the Virginia House of Delegates. Â In 2013 citizen activist Dave LaRock challenged May in a Republican primary after Joe May voted for the biggest tax increase in Virginia’s history, Governor McDonnell’s Transportation tax plan which overly burdened May’s district among others in NOVA and in the Tidewater region. Â Dave LaRock easily beat Joe May by 16%.Â

Last fall when Mark Herring became Attorney General,Â a special election was held for his vacated Senate seat in the adjacent 33rd district. Â Despite the fact that Joe May has never lived in that Senate district he decided to run for the open seat as a Republican. Â One day later, May changed his mind and decided to run as an Independent. Â May knew that he no chance of winning the race but he was happy to get into the race to thwart Republicans and help throw the race to a Democrat. Â Joe May proved himself to be not a man of principle, but a sore loser with no thought of the harm that might come to Virginia when he helped tip the balance in the Virginia Senate to the Democrats.

Now Joe May is continuing in his attempts to hurt Republicans by challenging our very popular Senator Dick Black in the 13th district.Â Â These plans came to light from sources close to May’s effort, and via an individual who was solicited to help with his campaign. (We eagerly await the appearance of Corry Bliss to “help” Joe May).

According to another source, May’s run could take a much more interesting twist. A Richmond campaign professional in a position to know has told The Bull Elephant that, should the Republican field prove too daunting, Governor McAuliffe has offered to clear the Democrat field if May were to run as an independent (thus making May the nominal Democrat in the race). We do not think Joe May has much of a chance in a Republican nomination contest against Dick Black, so it could be that May will ultimately run as an Independent with the tacit endorsement of state Democrats.

Sounds like Joe May is working closely with the governor as he jumps from district to district damaging Republicans. Maybe this is another of the governor’s backroom deals to give May an appointment, like he tried to do with Puckett. Anyone want to bet May’s been promised Sec. of Technology? Hmmm?

I’m just sad to see former Delegate May going out like this. It was bad enough he lost by 16 points to a political newcomer and ran against John Whitbeck as an independent candidate but this is just sad. He’s become a Democrat tool. It’s hard to see how he could possibly do any more damage to his reputation. Even the moderates are upset because Joe May is making it look like moderate Republicans can’t be trusted to turn on the party when they don’t get their way. I just don’t understand why he would do this.

Talk about waking up the grassroots! This is the most exciting thing that has happened in Northern Virginia politics in a while. No one will bring out the volunteers like Joe May….but too bad for him they’ll all be eagerly working against him.

Does Joe May’s seniority in the House count in the Senate?
I ask because, if so, we may see the motivation.
Having been a critical part of the Transportation Tax that is raising hundreds of millions of dollars, Joe would want to sit at the helm and help dole out cash to his friends.
As it is so often in politics, it is about the money, money, money.

While I agree with the sentiments of the folks here, and don’t think Joe has much of a chance in a Primary against Sen. Black, he could cause a lot of havoc. If I had to guess, I would say McAuliffe is using Joe May as a stalking horse. Terry could have told Joe that he would clear the field for him so he could run one on one against Black as an Independent, but he most likely was lying. So Joe gets into the race as an Independent, then the Dems put up a candidate of their own, and Joe helps elect a Democrat.

Somebody who knows Joe well should sit him down for a “Come to Jesus” moment and convince him that this is probably the dumbest thing he has ever done.

Legacy? Joe May’s legacy is mud. After getting crushed by LaRock he openly helped the Democrat in an attempt to defeat LaRock and failed. Then he jumped districts to take enough votes away from GOP nominee to throw the election to Wexton. Now Joe May is jumping districts again to do McAuliffe’s dirty work on Dick Black. It won’t work this time. Voters aren’t stupid and they’ve caught on to this clown.

Good points all Jeanine. The unfortunate Mr. May will lose this contest also. He runs the risk of becoming a laughingstock.

I used to think Joe May was an honorable person. But he is clearly working with the Democrats to undermine the Republican Party because he is personally offended that voters rejected him. He’s 77 years old and all he can focus on these days is revenge. I’m just surprised that he doesn’t care about a reputation and good will that he earned for over 20 years. It is hard to understand why someone would want being a Benedict Arnold to be their legacy.

No one can understand why Joe May has done this to himself. Such a sad legacy and self induced. He just can’t bring himself to stop hating republicans for rejecting him.

Joe May was my former district delegate for many, many years so I had the opportunity to see him in action on numerous occasions. Don’t know how well you know Joe but he was always an amiable guy when things went his way and being in one of the most solid Republican districts in the state they almost always did go Joe’s way over the years. But on those rare occasions when things didn’t fall the way he expected them to a VERY different side came out rather quickly. Don’t think he has “done anything to himself” you are just seeing that other side that was rarely on display in the “my way years”.

Good luck with that one, Joe. You couldn’t beat someone with no record or name ID in an HOD race to preserve a seat you held since Pontius Pilate ruled Jerusalem, and you think you’re going to beat DICK BLACK in a Senate race? Go home Joe May, you’re obviously drunk. This is about the dumbest thing I think I’ve ever heard.