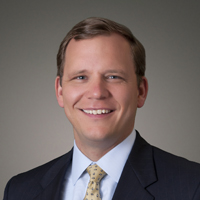 Going through Johnâ€™s history, one can see an interest in public service and significant experience that show both a keen intellect and a knowledge base for running a large office. His history includes such highlights as:

The only question for someone with Johnâ€™s history is: Does he desire the bench, public office, or the private sector money?Â  Apparently public office has piqued his interest.

John hails from Chesterfield County originally. He spent the early part of his legal career in Northern Virginia, but was pleased to be able to return to Chesterfield when he joined the U.S. Attorneysâ€™ office. John is married and has four boys. Despite his legal pedigree, I found John to be quite approachable and down to earth.

John has worked in a number of positions that prohibit political involvement, but in the past few years he has made some efforts to become more involved in Virginia politics. John made substantial contributions to Glen Sturtevant and hosted a fundraiser for that vital senate seat.Â  He also has a donation to Tony Pham for Henrico Commonwealthâ€™s Attorney.

I am not a politician and I have never run for public office. But I have been urged to run for Attorney General and I am considering it. Public service has been central to my life, including as a U.S. Naval Officer, a law clerk to Justice Clarence Thomas, an Associate Counsel to the President of the United States, and a federal prosecutor. My aim has always been to serve my fellow citizens by preserving individual liberty, protecting public safety, and supporting each individualâ€™s ability to pursue their chosen path. Today our Constitution and form of self government are under assault, and Mark Herring is an enthusiastic accomplice. Virginia needs an Attorney General who will fight for what makes Virginia a great place to live, work, and raise a family.