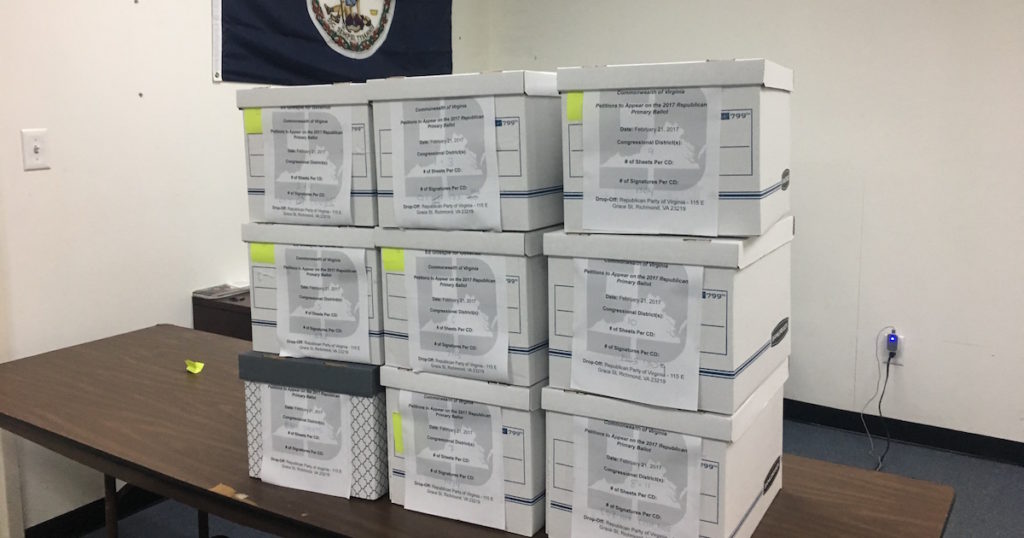 The race is on amongst Virginia Republican statewide candidates to collect and submit their required 10,000 ballot access petition signatures!

The deadline for submitting signatures isn’t until March 31. The first day that signatures can be submitted is March 13. However, the Republican Party of Virginia will perform a “pre-check” of the signatures (rather than a post-check after they’re filed with the Department of Elections) at any time, and so far three (and soon to be four) candidates have availed themselves of this service, largely for the good publicity it provides them.

First out of the gate was Ed Gillespie, candidate for governor. Gillespie produced more than 14,500 signatures on February 21, a full three weeks ahead of the first day for an official turn-in.

The latest has been long-time Prince William County Board of Supervisors Chairman Corey Stewart, running alongside Gillespie for the gubernatorial nod. The Stewart campaign topped his rival’s total by a little over 1,000 signatures (15,552), delivered two weeks later, on March 6 (to much Facebook fanfare from his staff).

Next is to be Attorney General candidate John Adams. According to the talented and dashing Nick Collette, campaign manager to Adams, their campaign will take the lead in petition signatures during a pre-check tomorrow, where they will unveil 15,573 signatures: 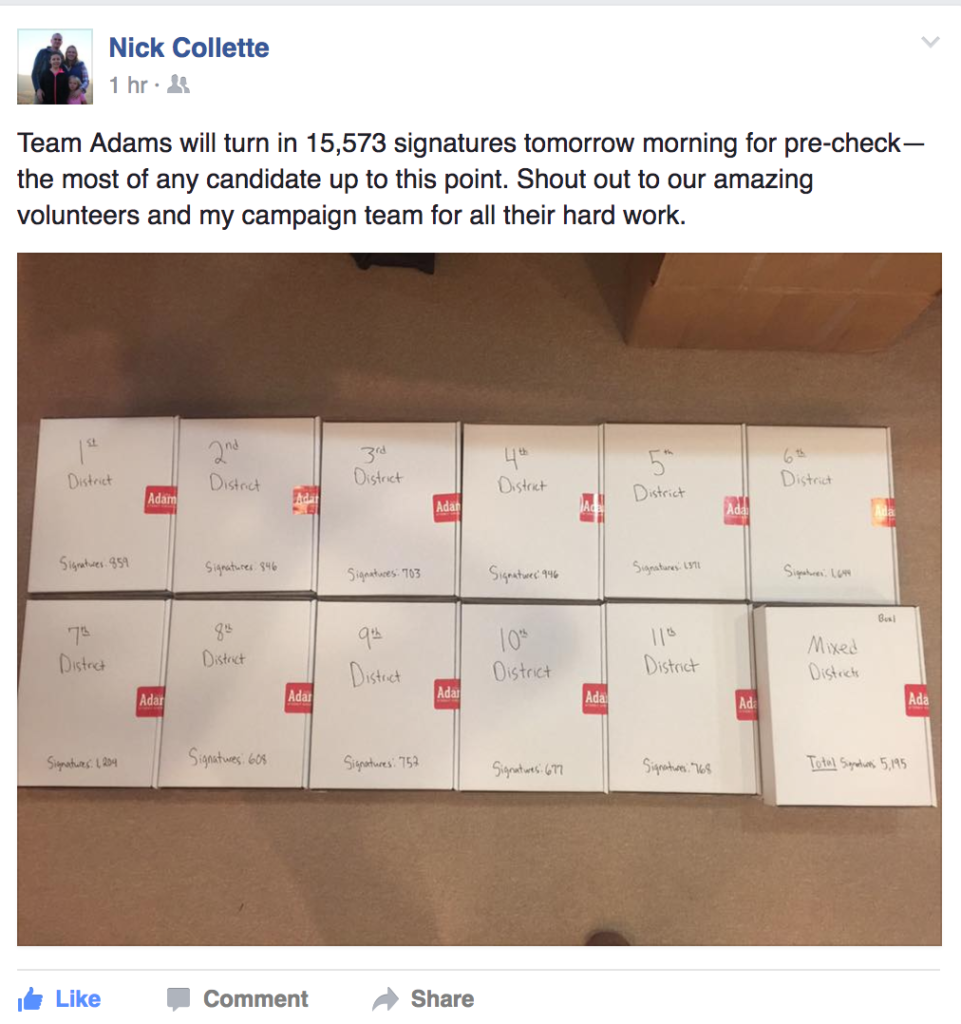 No word yet from the other candidates on when they’ll submit their signatures, and how many they’ll be able to show off. My bet is that Wagner will try to come in around the same total as Stewart and Gillespie, but given he does not have anywhere near the grassroots support as these gentlemen, he may not be able to impress. Riggleman, who entered the race last, will probably be the last to submit signatures. But he’s got some enthusiastic grassroots supporters and a very clear target to exceed, so don’t be surprised if he doesn’t maximize the remaining available time doing just that. In the other races, Sen. Jill Vogel (R-Fauquier) is also likely to return an impressive number in her bid for Lieutenant Governor.

So, what does a strong signature count show? To some degree, it shows grassroots enthusiasm, to be sure. But it also show organizational muscle, and that the campaign’s staff have been around the block before. Gillespie’s strong (and very early) showing displays this, just like the Stewart, Reeves, and Adams figures do. Ultimately, though, it doesn’t really do anything to influence voters.

But for now, the campaigns who’ve completed the task can breathe a sign of relief, and pat themselves on the back. Gathering these signatures takes a monumental amount of work from staff and and innumerable volunteers…a real feat of sweat and shoe leather. The campaigns are right to toot their own horns, and to brag on how great their volunteers and staff are. It’s true…they are great, and have a whole lot to be proud of. Congrats to all of them!