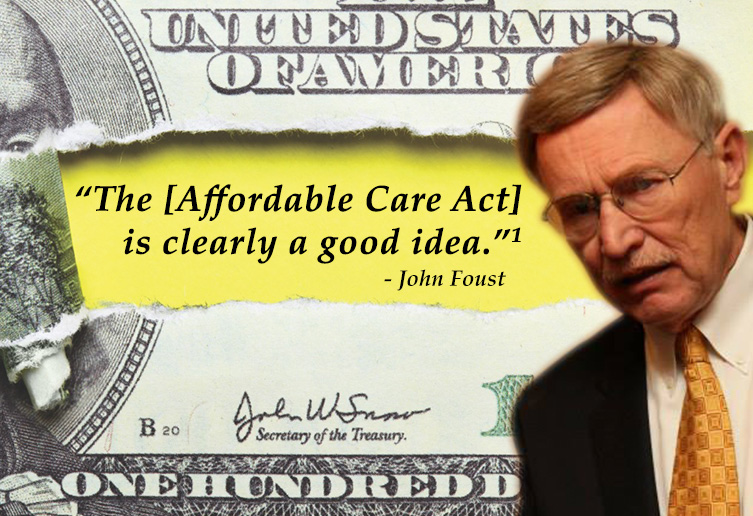 John Foust Has Big Problems With His First Television Ad

On Tuesday John Foust (D-Dranesville), candidate for Congress in the 10th district, released his first television ad which played repeatedly on local channels but the ad was not without problems.[read_more]  The ad’s message is John Foust’s ability to make budget cuts and balance budgets during his years as a Supervisor in Fairfax county.  What he fails to mention is he balanced the county budget by increasing the  property tax rate from $.89, when he took office in 2008, to $1.09 today.  The rate is the amount paid on each $100 of the assessed property value.  It’s easier to balance a county budget when you repeatedly increase taxes.  The last thing we need in Congress is another member voting to raise taxes.

The second problem with the ad is the setting, inside the Fairfax Government Center.  Please note the setting and the employees in the background:

According to the Washington Post county buildings can be used by employees for personal or private use.  I don’t think that means political use during a work day using county employees as extras.  From the Post article,

“It’s troubling that John Foust would use government facilities, which are paid for by taxpayers, to film his political commercials,” said Katie Prill, spokeswoman for the National Republican Congressional Committee, noting Foust’s name is not on the permit. “This is clearly outlawed by Fairfax County’s own code of ethics and personnel regulations, but apparently Foust thinks he’s above the rules.”

Foust seems like a local politician who needs to stay local…….not a lot of heavy thinking!!!

Comstock is too conservative on the abortion issue, but hopefully she never votes on it and I cant take another Democrat who thinks we need more programs which I pay for….

Ah, the latest bullshit from Jeanine.

Yes, the Fairfax property rate did go up from 2008 to today. That’s because property values dropped 15-35%. The average amount of property taxes paid this year versus 2008 is roughly the same. In real terms, taxes paid in Fairfax are up about 5% over the last five years, which doesn’t cover inflation.

As for the Foust commercial, he applied for and received a permit to film that commercial. Nothing illegal about that. If Comstock wants to do the same, she can. Too bad she doesn’t have the money to actually shoot and put ads up on TV, but that’s beside the point.

it’s actually a very good ad. That’s the real reason Republicans are so mad about it.

House values have gone UP over the last two years and yet Fairfax Board of Supervisors raised taxes again. In the same time period that Foust was busy raising taxes, Loudoun county’s all Republican Board of Supervisors has lowered taxes every year. If Foust really saved money for the county it would be reflected in the budget. It’s not.

Loudoun taxes did not go down. The tax rates were adjusted but families did not see savings in their monthly home payments. Two years ago, the so-called savings, before the effect of federal taxes, was $64 a family a year. That us not enough to change monthly escrow payments. So, stop with the lies that the BOS lowered taxes. What they did was force program cuts that made families pay for public services independently, which raised what people spend. Bottom line is that we spend more because of the BOS, not less

For Republicans, math is pretty close to science. And science is just the devil’s lies.

My taxes went down as did my neighbor’s.

How much? Loudoun County Reporterd that the 2013 savings was $65 a family per year before the affect of federal taxes. That means your monthly escrow payments don’t change and you don’t realizes any savings. Take another look. Last year, the rate would have lepta your tax stable. If your taxes went down, it was more the affect if lower value

I was frankly intrigued by your claim (and to be honest somewhat dubious) as I know there has been little to no significant cuts in county programs and in fact growth in certain program areas as well as standard county payroll increases. How was this leger germaine pulled off? First, you were indeed correct that the 10.7% cummulative inflation rate over the 2008-2014 timeframe on top of drops in property values from the housing crash was not covered in the actual real estate property tax rate at $1.085 per $100 of assessed value nor even the proposed but not recommended increased rate of $1.09 or $1.095 maximum. How was this done?
First, was use of transfer of funds from the Commonwealth to backfill county shortfalls that were unfunded at the county level rather then to address cuts directly. This is the robbing Peter to pay Paul approach and leads down only ONE road – deficit spending and unsecured county debt. Second, diversifying county revenues off of the central reliance of the real estate property tax and backfilling or even increasing revenues aggressively by generating new “fee” based areas. This would also by the way grow the county tax base by incorporating a widing of the tax burden on non-residents (e.g., meals tax and transient tax) or “sin” taxes (e.g., cigarettes and liquor). Don’t just tax yourself but tax the guy next door as well for the services only you consume yourself. Some of these non resident fee based proposals would require state approval.
So the bottom line here is no free lunch and Fairfax has simply looked to other areas for funding (eg. deficit spending and fee base taxes). Ms. Martin is hardly full of any BS she was just confused by the monte card trick and which shell the peanut was really under. Foust is your typical tax and deficit spend Democrat and if thats what your looking for then he’s your man.

Comstock does have a commercial, and she didnt have to take out a $500,000 loan to pay for it
You seem to fail to see the ethical issue in filming a political commercial with county employees and their “boss” as the star…