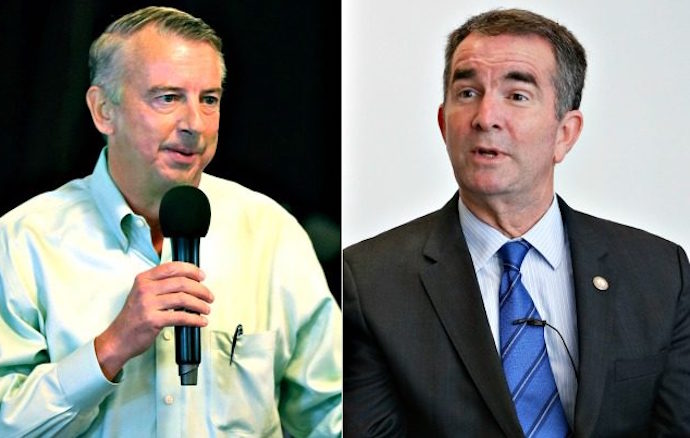 It all adds up to a nearly flawless track record! I’m right a whopping 97 percent of the time.

Finally, my predictions do not necessarily reflect my endorsements or my preference as a voter. It’s just my cold, hard analysis.

Virginia Governor- Snatching defeat from the jaws of victory

There is no way the Republicans should win the Virginia governorship in 2017. Every analytic trend in the last 30 years of Virginia politics screams for a landslide Democratic victory.

But Ralph Northam has snatched defeat from the jaws of sure victory.

While the Gillespie campaign is a conglomeration of website white papers and policy-wonk-a-mania, Northam’s campaign is so bad it makes Creigh Deeds look like JFK.

Somehow, Northam has failed to capitalize on Virginia Governor Terry McAuliffe’s popularity, and instead has lost his entire narrative to Gillespie in the last 10 days of the campaign. As popular as McAuliffe is in Virginia, it is inconceivable that Northam didn’t wrap himself around the Governor’s record and run as a McAuliffe second term.

In addition, Northam flip flopped on sanctuary cities four times in four days with four different positions.  He also lied about his campaign’s coordination on the Latino Victory Fund’s despicable pickup truck ad. Candidates who lie to their constituents a week before an election don’t fare very well.

Consultants have turned a really good man into Virginia’s Manchurian candidate.  The first Democrat that Northam ever voted for was Ralph Northam.  Now, Ralph Northam the state senator would not vote for Ralph Northam, candidate for governor.

Wow. Jill Vogel is the face and embodiment of the new Republican Party in Virginia. She will lead the GOP ticket in raw votes, and is going to be Virginia’s 2021 governor regardless of the Gillespie-Northam outcome. This woman has run a great campaign and has become the heroine of Trump’s Virginia voters. She disagrees with President Trump on certain policies, but does it in a graceful way while embracing President Trump, his supporters, and his agenda. Her level of authenticity is refreshing and motivating.

One month ago I wrote John Adams off as political road-kill. Mark Herring had run a brilliant centrist campaign, and was poised for a comfortable re-election effort.

Adams is going to win this race.

First, he had zero chance of defeating Rob Bell in a convention. Then State Committeeman Ron Hedlund changed his vote, and we had a primary.

Second, Adams had about a 20 percent chance of beating Bell in a primary. Then Bell drops out, and he’s the nominee.

Third, Adams had virtually no chance to defeat Herring. Then the RAGA – who has a policy of not giving money to challengers running against incumbents – changes their longstanding game plan and gives several million dollars to Adams, revitalizing his campaign.

Fourth, Ralph Northam goes belly up in the last week, the racist LVF ad runs and Republicans get pissed for being called racist and now all hell breaks loose. If you wrote a script on this, it would probably be rejected by Hollywood as too bizarre. Adams wins.

He should buy a Powerball ticket!

I’ll be on CNN Monday night with Don Lemon to make these same predictions on national TV!

Glad I wasn’t betting on the Fredericks predictions in yesterday’s 2017 Virginia elections. That 97% (correct predictions) number just went to hell in a hand basket. Republicans lost everything but the kitchen sink all the way down to the local dog catcher.

I think your average just got destroyed.

Looking forward to your analysis too.

Reply
Here’s what is going to happen in House of Delegates races tomorrow – The Bull Elephant November 6, 2017 at 2:59 pm

My prediction if Ed does win.
Ed Gillespie WILL NOT RID VA. of
MS-13.
This is based on my employment experience in Va as a Licensed Contractor.
Gang Task Force officers will tell you;
they get thier foothold in the community through illegal employment in the Construction Industry , then the drugs start coming in.
Some folks lack the fortitude to cut the snakes head off!
I will be 100% *Right*

Tough to call.
Most Dems. come out looking for Government to do something for them.
Ralph has not bridged the political bribe with them.
I will not be proud of our Gubernatorial Candidates tomorrow.
Can’t we all just write in Adams for Governor?

Congratulations on getting your wish.

Quinnipiac, is apparently right 87% of the time. Now, in their latest poll, apparently they agree with my expert analysis as to the impending Northam victory, versus the imploding Gillespie loss. Polls seem to be abandoning the Gillespie, Vogel, and Adams record number of lies at a record pace.

Ed Gillespie, you are no Ronald Reagan.

Oh, so they’ll be a Republican sweep. Yeah, good luck with that.

Swamp John, you were anything but honest about the Trump tax cut for the rich this morning.

I wish I was as optimistic as you are.

My prediction: Northam wins by 3-5 points, once again NoVA, specifically Fairfax and Loudoun, doom the state.

That certainly is possible. I do think Mark Herring call pull it out because he has such name recognition in Fairfax and Loudoun from serving in the State Senate. But John Adams has run an UNBELIEVABLE campaign statewide. But if the Democratic vote is subdued, there’s no reason we can’t win all 3 seats and that will just really create an absolute meltdown among liberal intelligentisia in this coiuntry (i.e. DNC,Schumer, Pelosi, MSDNC, CNN, Post, times). My upset predictions: Tag Greeson wins and Subba Kolla beats Dirty John Bell.

Tough to call.
If Northam does loose it will be a victory surrendered for sure.
If Gillespie does win it will be because of the immigration adds and then it will be very interesting to see what the General Assembly puts on his desk first. This will tell the tale of loyalty and to whom. If he does not go on the offensive about illegal immigrants it tells me my HUD rentals should go international.

From your mouth to God’s ear.

The swamp dwellers, the “John Fredricks Swamp Radio Show” are both dreaming. They cannot buy or steal this election. They have not been able to throw enough slave labor, massive healthcare profit cash at this one to overcome the McDonnell, Trump, Ryan, or even Wittman lies. 7 years they lied to us about the repeal of Obamancare, and now they are saying trust us on tax cuts for the rich. The establishment wants you to tell them that you don’t mind being lied to. Hey Swamp John, tell em’ who got you that CNN gig???? Isn’t it the same person who got Corey Lewandowski his short lived CNN gig last year??This one is in the bag ladies and gentleman! And it ain’t the establishment bag.