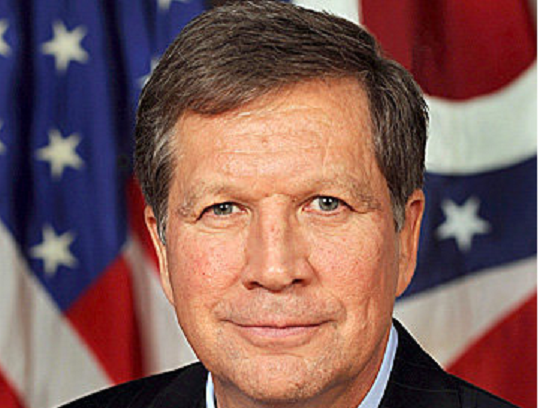 Ohio Governor John Kasich has announced his run for the Presidential nomination in 2016. HisÂ optimisticÂ theme is reminiscent of Ronald Reagan,[read_more]

“I am here to ask you for your prayers, for your support, for your efforts because I have decided to run for president of the United States,” he said.

“The sun is rising, and the sun is going to rise to the zenith in America again,” he said. “I promise you.”

“I am just a flawed man trying to honor God’s blessing,” he said.

With so many Republican Governors, we have a deep bench of Governors who want to become President. Governor Kasich is the fourth Governor to declare following declarations byÂ Gov. Scott Walker of Wisconsin, Gov. Chris Christie of New Jersey and Louisiana Gov. Bobby Jindal.

But the Republican’s most popular candidate for President is Donald Trump. Â In a recent Washington Post poll, Trump was way out in front with 24% of the vote. His closest rival was Governor Scott Walker at 13%. Â Jeb Bush followed at 12%. In the Real Clear Politics’ average of Presidential polls Trump leads all candidates by 4.2%. Trump has been the leader in every poll since July 9th.

According to the New York Times the Trump rise is well beyond what is normal following an announcement for President.Â Â They see his surge and largely driven by the media, but that will soon change as the media and other candidates take him seriously as a candidate. That’s their opinion. Â We’ll see if the NY Times is right, they are often not.Â

John Kasich Enters the Fray and Trump Moves to the Top of the Heap was last modified: July 21st, 2015 by Jeanine Martin

Did I miss something, or did Governor Rick Perry drop out of the race? Are there not FIVE governors running? Walker, Jindal, Perry, Christie, and Kasich?

I deleted my comment because I misunderstood and thought you were deleting TBE! Sorry for the confusion.

If you didn’t subscribe there is no way you could be getting our emails. We don’t make up email addresses for our list. Just curious, why did this post cause you to unsubscribe? It’s hardly the fault of this blog that Trump has risen to the top. We’re just reporting it.

I think he said “his” email list as in Kasich 🙂

Hurry! Burn the books! Delete books off Amazon! Revise history! Tune in Fox News! They’ll tell you only what you want to hear! Don’t report facts! They are dangerous! Lol

The Truth Will Set You Free! I call it like I see it.

That was quick…I just unsubscribed from his email list that I never registered for to begin with. ?

WOW! Donald Trump in front by double digits…and of course I predicted he’d be the GOP nominee last month…looks like I am right yet once again! #TrumpCleveland #FirstBallot Great to be featured on Virginia’s #1 blog!

Let’s all hope that the GOP nominee will be an adult who can rationally interact with others. Trump has obviously struck gold with the anti-illegal immigration riff, but his outrageous and irresponsible rhetoric is unforgivable. I am tired of hearing him tell us how intelligent and rich he is. He is an egotistical blowhard who inherited his father’s real estate business.

I think he has struck gold because republicans are beyond furious with how they have been treated by the Republicans overall which is less than diirt. You just have to read the 40000 plus comments on the various breitbart.com articles to see what is being said. I. Particular Mccain is extremely disliked by the base. Add the fact that we have a frightening and dangerous president who is basically receiving zero opposition and this is what happens. I mean where is the moral outrage over the jihad attacks by republican party leaderz? Thry cannot even talk about immigration they are so corrupt and bought/paid for by their donors.
In all honesty the Republican party is getting exactly what they deserve to get. I think it is great and will help stronger people rise up to lead. I appreciate Donald Trump very much.