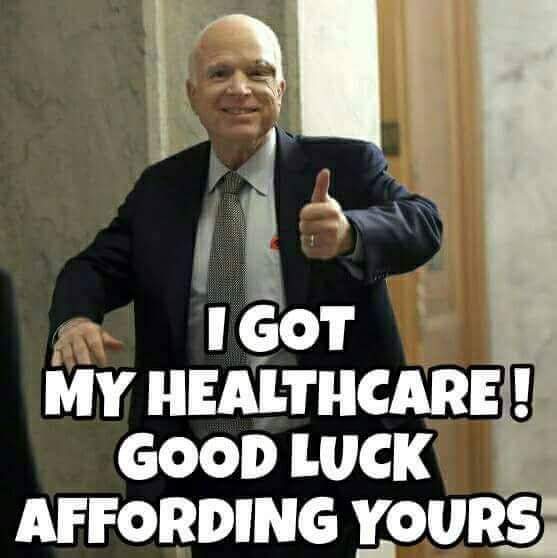 For those of us who will see our insurance premiums skyrocket in the next few months, we know exactly who to blame.  Yes the “Gentleman from the State of Arizona, Senator John McCain”.  McCain used to call himself a “maverick”, yet a closer look at his record shows that he is not so much interested in bucking the system.  To the contrary, McCain really just likes to draw attention to himself in a rather juvenile ways.

For someone who talks about how much he is disgusted by wasteful spending in Congress, wasn’t he the same “maverick” who supported that big pork barrel spender Thad Cochran over Chris McDaniel, a principled conservative who wanted to put an end to wasteful government spending?  Didn’t McCain run on putting an end to Obama Care, yet was the deciding vote on saving Obama Care for posterity?  McCain has been around Washington since 1982.  He cannot be so naïve that he really thinks the problem with Washington is that we need bipartisanship.  He was there when Pelosi/Reid shoved Obama Care down our throats.

See this from his failed presidential run from 2008, and you’ll notice that McCain compares himself with Teddy Roosevelt.  Roosevelt gave us the start of the “Progressive Era” a time in which government grew as it never had before during the history of the Republic.  This is what McCain sees as good governance.

And his political skills on the national level are to be charitable, bizarre.  Remember this was the guy who campaigned on Saturday Night Live by doing a QVC Skit selling off unused campaign merchandise.  Don’t believe me, here he is:  http://www.nbc.com/saturday-night-live/video/mccain-qvc-open/n12355?snl=1

Watch the video – you’ll see that McCain thinks losing is honorable, and quite frankly, losing is funny to him.  You’d think that McCain would be more interested in working with his fellow Republicans to ensure that he remains a committee chair, however he is so craven for attention that he’d rather get on the Sunday talk shows and plaster his face over the airwaves than look after the wants and needs of the good people of Arizona.  Many of whom must be getting sick of being screwed by McCain every few years.

For those of you who think that it’s wrong to criticize a war hero such as McCain, sorry but he can’t thrive forever on his time in the Hanoi Hilton.  If McCain truly loved his country, he’d do what is in our best interests and resign – or see a shrink to figure out why he’s more interested in showboating than doing his job.

Can you explain how the proposed legislation was going to improve your health care?

I am not a fan of McCain – far from it. But criticizing him for dealing with his loss by using humor is ridiculous. How would you have liked him to act? Would a temper tantrum be better? Or perhaps he should have cried? It seems to me that using humor was the very best option available to someone who has just endured a large (and very public) loss.

you seem to ignore all the things wrong with the bill including that is lowers coverage and raises costs. But don’t let that get in your way of celebrating your boy Trump

What? The current Senate bill is everything Trump said IT WOULDN’T BE. Only he could fix it, he told us.

Thanks John, I appreciate you having the courage to do the right thing.

Trump is a Democrat, what did you expect ?

The sad truth is that many “conservatives” are also Democrats that only stopped voting for the Democratic party because of cultural issues. You get specific on policy about “their” Medicare, “their” unions, “their” Unemployment insurance, and “their” EBT / Food stamps, and it doesn’t take long to figure out that they love that sh*t and will never be parted from it.

No idea what the hell McCain is thinking …

Rand Paul I get, I mean I understand why he is voting against it, he makes that very clear. Agree with it or not, at least you understand what Rand Paul is doing. But McCain ??? I’ve read a few statements he’s made, seen some video of him answering questions about his vote, and I still have no idea why he voted against repealing the ACA.

Rand Paul is voting against the bill because Kentucky loves their Medicaid expansion. The same expansion that Virginia has and continues to lose BILLIONS from not expanding.

I actually feel sorry for you people. You just don’t know any better.

Nah, that’s BS. The reason you’re saying it is because all Rand Paul really has going for him is conviction on principle, so that’s the one place everyone tries to take their shot at him. Like him or not, he is a True Believer, and could have taken the easy way out at any opportunity but didn’t.

Paul is the heart of the actual resistance to the Republican establishment.

Agree, Rand is our best senator by a rather large margin.

We aren’t losing billions because we haven’t provided Medicaid to all those that are above the income level that has traditionally been the cutoff for Medicaid eligibility. Obama wanted Medicaid to cover those that were above the poverty level and tried to force it on the states by providing short term federal subsidies. But eventually, those subsidies will end and the states will have to pay all those added costs. At that point returning to the previous income level for eligibility won’t happen. The people will be too used to the freebie to take it away.

I was branded a rapscallion or a scalawag or something the last time I dared to question St. McCain of AZ.

I shall always go where angels fear to tread. Plus, anyone who wants to defend tgat swamp dwelling creep either needs their head examined or is a Democrat

Oh look, a Republican supporting another Republican. John McCain does some things right.

I think you can always count on John McCain to get in front of a camera. His world view is not conservative or progressive or even middle of the road. He will betray any of them if that is what it takes to be loved by the swamp media.

LOL! Yes Jeanine, I’ll bet we can even find a picture of him shaking Reagan’s hand. What is posting this picture supposed to imply? McCain is good? Gillespie is bad? McCain is a career politician, motivated by nothing other than feathering his nest and maintaining his position and status in the swamp in perpetuity… He is useful to Republicans when he votes in a conservative way and supports our candidates. When he throws us under the bus by grandstanding and kissing up to the Dems, not so much. Thanks for the blog post!