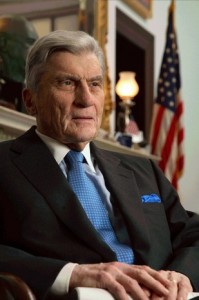 Cue the obligatory parade of “moderate” Republicans who will be rolled out by the Washington Post and others between now and November decrying the state of the “extremist, Tea Party Republicans.” (John Chichester, call your office).

These types of endorsements will be billed as a blow to Ed Gillespie, the former RNC Chairman and G.W. Bush counselor, even before the nomination is decided, and despite certain conspicuous policy positions from Gillespie that are, ahem, somewhat short of the conservative ideal.

But, let’s remember what type of a “Republican” John Warner is. He supported Gov. Warner’s tax hikes. He participated in the infamous abuse and ultimate rejection of Judge Robert Bork’s nomination to the Supreme Court. He supported Marshall Coleman’s independent run for Senate, ensuring Oliver North’s defeat and Democrat Chuck Robb’s re-election.

Given this kind of anti-Republican history, if I were Ed Gillspie I’d be thanking John Warner for helping to shore up Gillespie’s support among conservatives.

Why is it only republicans who do this? And why did he we bother to support John Warner over Mark Warner when they ran against each other? Apparently John thinks they’re both equally good Senators.

Republicans usually do this under the guise of ‘Virginians for…’.

Wouldn’t it have been great if R.P.V. officials had been this aggressive in consolidating the party factions/silencing inter-party opposition for Ken Cuccinelli and E.W. Jackson as they are for Chairman Gillespie?

Don’t you know, conservatives are the ones who are supposed to embrace “unity” moderates can be “principled” in opposition to their “extreme” party’s nominee. *sarcasm*

In other news Mark Obenshain has endorsed Ed Gillespie, and will probably be joined by Cuccinelli ( though probably with a disclaimer)

It’s certainly going to be rough sledding for Shak (or anyone else that hops in at the last minute).

He also helped Don Beyer beat Michael Farris in 1993.
He is also ( along with Richard Lugar) assisting an Abortion Extremist candidate down in Georgia ( and also a Democrat)
While Gillespie can be described as a “moderate” or moderate to conservative Republican in the guise of George Bush ( and Bob McDonnell)
John Warner is a Republican in the classic Nelson Rockefeller mold, big government, big taxes, social hedonism.
He’s even worse then John McCain. In fact on gun control and earmarks he is even worse then Mark Warner.

In the numerous political conversations I’ve been privy to amongst grassroot conservatives and Libertarian minded voters, some are considering writing in Fmr. Rep. Virgil Goode come Election Day.

Goode would be an excellent candidate if he didn’t throw it all away on a quixotic Constitution Party candidacy in 2012.
As far as “write-in” yeah a lot of people said the same about Bill Bolling. He had maybe 2,000 and it equaled about 0.5%
When Virgil was actually on the ballot in 2012 ( in near full turnout) he got 0.28 % and about 11,000 votes.
So I don’t expect him to draw many votes.
In my opinion, conservatives should support Gillespie ( in hopes he beats Warner) and hope that the political capital gained should be enough to guarantee our guy get’s the nod in 2018 to take on Kaine ( who is far more vulnerable then Mark)
Some names could be tossed around. Ken Cuccinelli and Mark Obenshain among them.
This is a time to mend fences ( at least as far as the Senate goes, have at it for the House)
2015, 2016, 2017, and 2018 are the years to enforce Purity.
We had a chance in 2013 ( and some of the candidates won) but all three of the standard bearers lost.