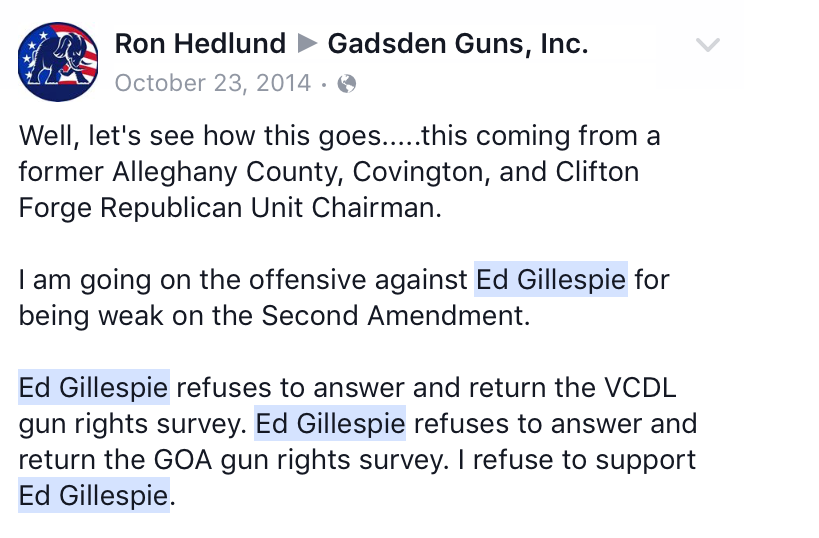 Editorial Note: This statement comes in response to revelations that Republican Party of Virginia Chairman Whitbeck hired staff and paid filing fees for convention delegates who would oppose Ron Hedlund of Henrico for his race to join the State Central Committee.  Hedlund and others have suggested this is improper, and harms conservatives who are allegedly Whitbeck’s allies.  More on the story can be found here.

By John Whitbeck, Chairman of the Republican Party of Virginia

I raised funds for my reelection and since my opponent dropped out of the race I have mainly focused on supporting those individuals who stood with me during my contested race. There is one exception.  I oppose and have actively worked against Ron Hedlund.   The reason I oppose Ron is quite simply because I believe he does not have the character or temperament to serve on State Central.

In 2014 Virginia had the one of the closest Senate races in the country. I and our State Central members worked tirelessly for our nominee. Unfortunately, we came up just short. 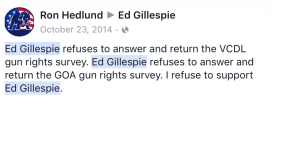 Where was Ron Hedlund? He was publicly stating he refused to support our nominee less than two weeks before the election.  With the Senate hanging in the balance and the Republican nomination decided weeks before, Ron thought it was better to not only sit out an election but advocate against a Republican nominee, that is unacceptable.

We have heard over and over again in 2016 Republicans saying they will not support the nominee for President if it is one candidate for another.  While this is their right to do so, Members of the RPV State Central Committee are held to a higher standard by our Party plan.  As Chairman of the Party I must take a stand and say that it is the duty of elected Republican leaders to support the nominees of our Party.  This duty of State Central Members to support the Republican nominee has never been more important than 2016.  Ron Hedlund cannot be trusted to do so and therefore should be disqualified from serving in leadership. 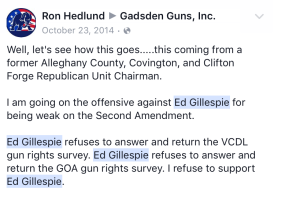 In addition, Ron has spread further disgraceful falsehoods about me such as: I donated money to VCN, I have been spending RPV funds to defeat him and even saying that I cast a tie vote in favor of a primary in June 2016.  Every one of these accusations are demonstrably false through campaign finance reports and State Central Committee minutes. He has gone as far as fabricating conversations I have had with him and then talking to media outlets about these fake conversations.

I could provide further examples but the point remains the same: character counts. When we select members to the State Central Committee they represent our Party. No one is perfect, but selecting someone who constantly makes false statements, refuses to support our nominees and actively works against Republican nominees is wrong for our leadership.  We must not elect individuals who advocate for “burning our Party down” instead of building it up. I don’t care what Party processes Ron Hedlund does or does not support, what part of Virginia he comes from or who he supports in 2016.  I am actively opposing him to serve on our State Central Committee.

[…] Fast forward another month and we suddenly see complaints popping up from Ron Hedlund, candidate for RPV State Central Committee and Vince Haley supporter, that John Whitbeck is recruiting delegates to sign up for the 7th District Convention in order to keep Hedlund from winning a seat on State Central.  John doesn’t deny this charge and even explains his actions in a statement published here. […]

Let’s see – when Ron Hedlund made those spot-on comments about candidate Ed Gillespie, Ron was NOT an officer in the party, correct? He was just an average grassroots worker, like millions of other Republicans in Virginia. Who felt the same way about Gillespie’s utter betrayal of gun rights and gun rights supporters and gun owners in VA. There are millions of us and Gillespie stuck his finger in all our eye with his CRAVEN cowardliness in refusing to publicly support gun rights. You damn right we called Gillespie out on it! ALL Republicans should have because Gillespie was acting like a DEMOCRAT or a DEMOCRAT-lite a.k.a. a RINO. By calling him out, we gave him a second chance, an opportunity to mend his error but he hunkered down and compounded his refutation of the 2nd Amendment.

Anyway nice try, but bringing up the past & Gillespie now is just to deflect attention from the main matter at hand.

The main issue is here and now. That the CHAIRMAN of our State Party is using (his) PAC funds to pay for prefile forms for delegates to come vote out a man he personally doesn’t like. Let that sink in: Our State Party Chairman is buying votes; interfering in a lower-level party election. How unsavory. Furthermore he’s also got the EXECUTIVE DIRECTOR, again of our state party, similarly and intimately involved in this unethical behavior.

RPV (paid) personnel – fundraisers – seem to also have used RPV resources to call and campaign – again in intra-party elections. What about the people who received these phone calls – are they all lying?

Is that what we’ve been donating to the RPV for? I believe a full audit is called for.

Character DOES count, remember that. And consider: the Chairman and Executive Director have demonstrated they are willing to use the power of their office and perhaps even state party funds to carry out a personal vendetta.

[This personal vendetta is also part of a larger vendetta. Eric Cantor has to pay everybody back who helped dispose him. And while doing so, Cantor/Establishment/VCN fire a clear warning to others not to cross the Establishment.]

And now after he’s called out, the RPV Chairman has the nerve to say the object of his vendetta is not fit to serve in the state party, or fit to represent the party. Well the best defense is a good offense.

Thank you, Ron Hedlund, for bringing this state party mess to light. It was an act of bravery. So even longer knives are no doubt going to come at you.

This scandal cannot and should not be swept under the rug.

This could be the cause of having Alec Thomas on State Central.

That’s EXACTLY my problem with the $3,050 given to defeat Hedlund. That’s a heck of a lot of money to take down one candidate for SCC. What about all the other bad actors running for SCC? Will their opponents get money? I sure hope so! Several folks in the 8th, 10th and 11th could use help getting elected to SCC.

The VCN slate certainly has resources.

Indeed they do. Since John doesn’t have an opponent he needs to empty his victory fun to elect more grassroots conservatives to SCC. I’m sure he will.

If John Whitbeck is trying to be fair in his attacks on Ron Hedlund, why is he not using the same tactic with Alec Thomas? The case against Alec is stronger. Congressman Brat is the Congressman. He’s the Republican nominee. Dave hasn’t badmouthed anyone in these races. If Mr. Whitbeck were to apply the same standard to Alec Thomas why hasn’t he said anything yet? Alec’s actions, statements and employment gives him a problem with his own membership in his own committee and bars him from being fit for SCC. Where is Whitbeck?

But it’s not about him, it’s about State Central!

O it’s about him. The ego needs to be hosed down. Just Sayn.