Latest Posts
Outstanding in his field
What you can do NOW to promote Election...
Climate Politics
Arson in the West
How Stupid Do They Think We Are?
Be a VIP! Vote in Person
Will Virginia teach critical race theory to kindergartners?

Jon Berkley: 'It could have been a Playboy Magazine or bomb for all I knew' 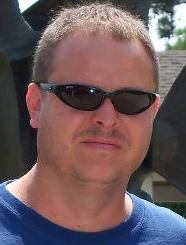 Jon Berkley, as Chairman of Charlotte County, issued the Charlotte County Call that stated that all pre-file forms to attend the 5th District Convention as a delegate (to vote for him or Lloyd) must be submitted to his home by 7pm on March 6th. Hud Marston, a supporter of Mark Lloyd’s, contacted Jon Berkley by phone at 10am on March 6th (phone records verify this phone call) and told him he had pre-file forms he needed to hand deliver to Jon Berkley. Jon Berkley stated that he would not be home that night to receive the pre-file forms, which was in violation of his own issued call, because he was attending a Health Care Forum that evening. Marston offered to drive an hour to Berkley’s place of employment to deliver them that afternoon, but Berkley insisted that it would be better to meet him in the Crawley Forum parking lot at Hampden-Sydney College before the Health Care Forum at 7pm. 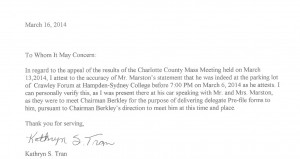 Hud Marston testifies that he and his wife arrived at 6:45pm to deliver the forms to Jon Berkley, per Berkley’s request. Former Prince Edward GOP Chairman, Kathy Tran, saw the Marstons in the parking lot before 7pm and stopped to talk to them. She was there when Berkley arrived. Jon Berkley arrived a few minutes after 7pm, took the manila envelope from Mr. Marston, threw it in the front seat of his car and proceeded to the Health Care meeting without stating there were any potential issues. His only comment to Mr. Marston was, “looks like you’ve been busy!”

Four days later Mark Lloyd and Jon Berkley were both speaking at the Danville Tea Party meeting and Mark asked Jon if he had received his Charlotte pre-file forms. According to Mark Lloyd, Jon’s response was something like, “Don’t be so sure those are all your delegates. I’ve looked through them and some of them might be for me!”  They both chuckled and nothing more was said.

Charlotte County held their mass meeting on March 13th at 7pm. Jon Berkley confirmed in an email to me via Facebook that two hours before the mass meeting was to begin he personally called and left messages with these pre-filed delegates, telling them that their prefile forms were improperly filed and that unless they showed up to the Mass Meeting they would be disqualified. Of course, only 5 individuals were able to comply on such short notice, especially since most work outside the county.

The Credentialing Committee of the Mass Meeting was NEVER presented with ALL delegate forms for consideration. No motions or votes were taken or considered at the Mass Meeting regarding these questionable delegates. Instead, Jon Berkley stood up at the meeting and  unilaterally declared that someone had leaked to the Republican Party of Virginia that the forms were submitted 10 minutes late and that he was bound by General Counsel to discard them or fear having the entire Charlotte delegation disqualified. Chuck Vilushi, who was a member of the nominations committee and had personally collected many of those forms in question stood up and complained that these 18 delegates were being left off and proceeded to read their name for the record, but his comments were readily dismissed and the meeting moved forward.

Chris Shores, who is an elected member to the 5th District Committee, spoke by phone with Berkley about the shenanigans in Charlotte County. Berkley claimed that he did not know why a member of his Republican committee, Mr. Marston, would want to meet him on the night of the prefile deadline to give him a package. Further, Berkley alleged to Chris Shores that he had no idea what was in the manila envelope that Marston handed him, because he never bothered to look inside. Shores challenged him stating, “Do you make it a habit of taking strange envelopes from people in a dark parking lot?”  To which Berkley replied, “it could have been a Playboy Magazine or a bomb for all I knew! I just threw it in my car and went to the forum.”

Berkley claims that he didn’t look inside the manila envelope until later, at which time he discovered that he was in possession of pre-file forms – much to his utter shock and amazement. Berkley further claimed to me via Facebook message that he could prove those forms had been given to him after the 7pm deadline and he told Shores that he had  a restaurant receipt that was paid at 7:01pm to back up his claim.

Well, there are a number of troubling facts with this story, which cast serious doubt on the integrity and ethics of Jon Berkley:

Of course, one can imagine how embarrassing it would be for Mr. Berkley if there were more delegates for his opponent in his own home county where he serves as the Charlotte GOP Chairman.  This kind of behavior makes slating look mild by comparison. I wonder if Congressman Hurt would be willing to stand behind Mr. Berkley if he knew the truth?

Jon Berkley: 'It could have been a Playboy Magazine or bomb for all I knew' was last modified: May 15th, 2014 by Jamie Radtke
#VA055th District ConventionCharlotte CountyChris ShoresCongressman HurtJon BerkleyMark Lloyd
38 comments