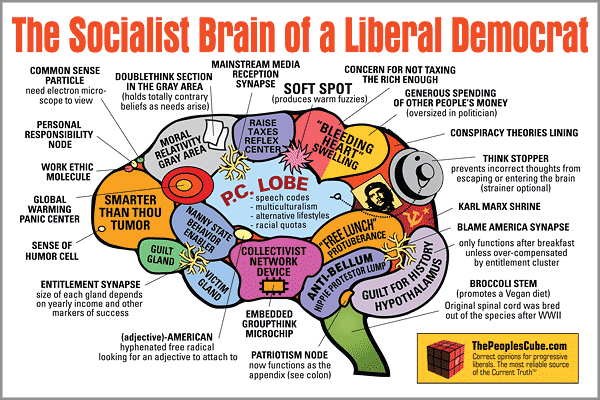 Journey To The Center Of The Liberal Mind

As a result of my having grown up in the 1960s in a culturally Jewish household in Manhattan and having attended City College of New York, the so-called “Harvard of the Proletariat”, I embraced liberalism at a young age. But once I entered the real world, I realized how misleading and deceptive the anti-American diatribes promulgated by my relatives, friends, and teachers had been. I expected others would be able to see through the deceit once they left college and entered the real world. Not so.

For many, liberalism is a lifelong mental disease, and there are plenty of middle-aged professional people mired in the mindless muck of cultural Marxism, that has infected their brains and rendered them incapable of civil and rational debate.

Several years ago, I ventured into the world of online dating, seeking polished, mature women with college degrees in the 55 to 65 age brackets. I learned quickly that such ladies were more plentiful in northern Virginia. But as a center-right populist, I knew there would be circumstances in which I would have to downplay my pro-Trump views if I wished to enjoy a pleasant evening. The following paragraphs are anecdotal, but I suspect the utterances described below reflect the prevailing mindset of most northern Virginia Democrats, many of whom I learned were transplants from the North.

The most memorable conversation I had was with Maura, an athletic and shapely anesthesiologist from Boston, now living in Alexandria. Maura had sent her two daughters to Catholic schools here. On our first and only date we eventually got around to talking about kids and school and how I had long been an advocate of school choice and vouchers. “Oh my God!” She gasped. Do you realize what you are saying? School choice will lead to the separation of the races. This is exactly what racists want!” I thought to myself, “Uh oh.” Knowing the relationship at that point was doomed, I pointed out that school choice and vouchers were designed to give poor and medium income parents OF ALL RACES the very same options her salary had afforded her. Her response was so incoherently nonsensical, that my mind closed down and I wished at that moment that Scottie could have beamed me up.

A few months later I met Jane, an executive assistant who was the daughter of Japanese and Irish parents. Acknowledging her mixed ancestry, she referred to herself as a “Cauc-Asian.” On our third date Jane told me that her big complaint was that she could not find a “nice Democrat man” to go out with, and that she had been forced to date men like me, conservative white retired military officers, some of whom she claimed were racist. I asked for an example of such racism. “Well, I dated a retired major from Maine, and I told him that the problem with Maine was that there were only white people up there.” He then said, ‘So. What’s wrong with that?” Jane took his response – not her initial remark – to be racist. Up until that point I had sensed some potential with Jane, so I kept my mouth shut, but I knew I would soon be facing the proverbial make or break point. I called her the next day and spoke my mind. “You know, Jane, if I had been that guy from Maine, I would have said the same thing he had. In fact, suppose if I had said that the problem with Japan was that there was nothing but Japanese there? How would you have taken that?” Two days later I got the text from Jane that I had been expecting.

And finally, there was Kirsten, a chiropractor from Vienna, whom I had dated several times in December 2016. Kirsten wanted me to join her for “The Women’s March” right after Trump’s Inauguration, even though she knew I had voted for Trump. I told her that I would go because I had not approved of Trump’s comment about women’s genitalia. However, I wanted Kirsten to admit that while Trump uttered a profanity, Bill Clinton, whom she had supported in the 1990s, had (if we are to believe his numerous accusers) assaulted and raped women. I asked her if she could she at least admit some inconsistency in the way she viewed Trump and Bill Clinton. What I received instead was a blank stare and an email the next day ending our relationship.

Because of my having talked to a multitude of women online and having met or dated well over three dozen of them in the course of two years, I have sufficiently tested the ideologically mixed waters of northern Virginia. I can state with certainty that conservative women are much more tolerant of my liberalism than liberal women are of my right-leaning populism.

Journey To The Center Of The Liberal Mind was last modified: July 3rd, 2018 by Guest Contributor Mark Jaworowski
32 comments