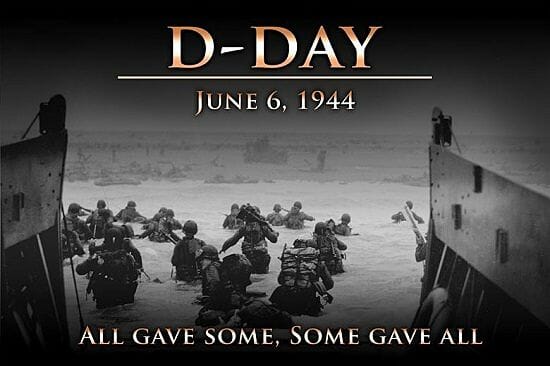 5 June 1944 – “Soldiers, Sailors, and Airmen of the Allied Expeditionary Force:
You are about to embark upon the Great Crusade, toward which we have striven these many months.

The eyes of the world are upon you. The hope and prayers of liberty-loving people everywhere march with you. In company with our brave Allies and brothers-in-arms on other fronts, you will bring about the destruction of the German war machine, the elimination of Nazi tyranny over the oppressed peoples of Europe, and security for ourselves in a free world.

Your task will not be an easy one. Your enemy is well trained, well equipped, and battle-hardened. He will fight savagely.

But this is the year 1944! Much has happened since the Nazi triumphs of 1940-41. The United Nations have inflicted upon the Germans great defeats, in open battle, man-to-man. Our air offensive has seriously reduced their strength in the air and their capacity to wage war on the ground. Our Home Fronts have given us an overwhelming superiority in weapons and munitions of war and placed at our disposal great reserves of trained fighting men. The tide has turned! The free men of the world are marching together to Victory!

I have full confidence in your courage, devotion to duty and skill in battle. We will accept nothing less than full Victory!

Good luck! And let us beseech the blessing of Almighty God upon this great and noble undertaking.”

This order was issued by Gen. Dwight D. Eisenhower to encourage Allied soldiers taking part in the D-day invasion of 6 June 1944. Almost immediately after France fell to the Nazis in 1940, the Allies planned a cross-Channel assault on the German occupying forces, ultimately code-named Operation Overlord. By May 1944, 2,876,000 Allied troops were amassed in southern England. The largest armada in history, made up of more than 4,000 American, British, and Canadian ships, lay in wait, and more that 1,200 planes stood ready. Against a tense backdrop of uncertain weather forecasts, disagreements in strategy, and related timing dilemmas, Eisenhower decided before dawn on 5 June to proceed with Overlord. Later that same afternoon, he scribbled a note intended for release, accepting responsibility for the decision to launch the invasion and full blame should the effort to create a beachhead on the Normandy coast fail. Much more polished is his printed Order of the Day for 6 June 1944, which Eisenhower began drafting in February. The order was distributed to the 175,000-member expeditionary force on the eve of the invasion.

Though almost eighty years ago, D-Day remains a testament to America’s altruism and greatness as a nation. No other sends its men and women to die in combat and expects nothing in return. It is very touching to see how to this day members of our Greatest Generation to this day are remembered in France and Belgium for their kindness and self-sacrifice when defending the principle of democracy thousands of miles away from the wheat fields of Kansas or hills of Tennessee. Americans unlike Russians who brought rape and pillage in their path (fast forward to Ukraine) were seen as true liberators on a noble crusade to defeat the scourge of Nazi Germany.

May God bless America and those who without question or hesitation sacrificed seventy-eight years ago.

Eric, yes suspect Canada should have been included as well, although as part of the British Commonwealth i beleive they were also in the fight to restore the Brirish Empire.

It would be interesting if you could resurrect Ike and brief him on the last sixty years of American wars. Would the man who coined the phrase “Military Industrial Complex” and the need to be wary thereof not be disgusted, amazed at how true his words became and how much said MIC which includes a lot of new members…. Big Tech/Big Pharma/ and of course BIG Wall St…have botched things at every turn accelerating with the ascendancy of the Boomer Generation with the absolute crap that was Clinton/Bush/Obama.
You wax sentimentally upon the glory days of America Mr. Poplar. Those are over. A military/political leadership/culture ETC that produced the bug out in Afghanistan would get its ass kicked if it took on the great Wehrmacht of WWII.
Thus I warn you about continuing to fund/beat the war drum etc in the Ukraine. But the fools … the neocons.. the neoliberals who run the show in the bowels of the gumment cannot helps themselves. Did any of those P.ssies… like Bill Kristol Max Boot, Kagan, Nuland, Cheney, Clinton (Bubba and Hitlery) Woflowitz, ETC ETC EVER fight in a war? Of course not. They send the deplorables. Add to that their sheer incompetence at strategic thinking… You have to wonder WTF are they doing in any war they have engaged from Vietnam to the present. However, they can sure organize a great military pride parade can’t they?
So here you are. Enjoy the past. US history is not repeating itself in this instance.

Joker, i actualy concur with you and there is no strategic thinking.

What began as a fairly straightforward U.S. policy of arming Ukraine with defensive weapons against Russian aggression has now expanded into dangerous and rapid escalation. We now have embarked on the inevitable slippery slope of mission creep and where we will end up will probably not be where we had intended. If history has taught us anything it is that before engaging in an armed conflict, we must have a clearly defined end state and the strategy (the ends, way, and means) of achieving it. Right now, we have neither – the ghosts of Lyndon Johnson’s Vietnam still haunt us.

With the recent passage of the recent $40 billion aid package the Biden administration is pursuing a policy of escalation in Ukraine that represents a new and dangerous phase in the conflict. Initially the United States and its North Atlantic Treaty Organization (NATO) allies responded to Russia’s invasion of Ukraine rather straightforwardly, with supplies of defensive arms and humanitarian supplies to the Ukrainians and economic sanctions on Russia. But recent events that could have unintended consequences.

Now, instead of simply helping Ukraine stave off the Russian invasion, U.S. policy seems to have shifted into something else entirely: the permanent weakening and dismemberment of Russia at any cost. Defense Secretary Lloyd Austin after a clandestine visit to Ukraine with Secretary of State Anthony Blinken stated, “We want to see Russia weakened to the degree that it can’t do the kinds of things that it has done in invading Ukraine.” After her own recent “heels on the ground” visit to Kyiv, Democratic House Speaker Nancy Pelosi characterized the war as a “global struggle for democracy.”

It also appears the U.S. military may also be providing real-time battlefield targeting intelligence to the Ukrainians thus making the United States by definition an active belligerent in the conflict. This amounts to a major policy shift on the part of the United States. Initially the primary Western objective was to defend against the invasion and now it appears to be the permanent attrition and weakening of Russia.

So what possible strategic gain does bleeding Russia in Ukraine hold for the United States? The risks of pursuing such a policy are immense, including the possibility of thermo nuclear war between the world’s top two nuclear powers where there will be no “winners.” If the Biden administration has some overarching goal in mind, it has not laid it out in detail for the American people and garnered their support.

Even former US Chairman of the Joint Chiefs Admiral (ret.) Mike Mullen stated last month on ABC this Week “We need to make sure that we consider [a Russian nuclear attack] as a possibility, both a tactical and, God forbid, the strategic force. [Putin is] pretty well cornered and boxed in, so we would certainly have to consider it’s a possible action he can take.” Scary stuff as a result of the current administration’s ineptitude and by the way we have NO defense against Russian Intercontinental Ballistic Missiles – none !

And recently President Biden unilaterally went off script and declared during a routine reporters query we would defend Taiwan and in one word undoing decades worth of American Foreign policy built on “strategic ambiguity.” Incredulous and the subject of a future Viewpoint.

As GEN Colin Powell warned in his “Powell Doctrine” in the run up to the Gulf War, we must have clearly defined national security interests and widespread public support before undertaking any large-scale military action. President Biden has failed to do this. Somehow, I think GEN Powell is shaking his head as we continue to slide down the slippery slope with perhaps unintended consequences which may include Armageddon. An end state that may be inevitable based on our current uncharted and misdirected path.

Yes sir. I apologize for commenting on an article that heralds the great days of America and no doubt leaders like Eisenhower are to be celebrated, listened to for posterity (see the warnings about the military industrial complex) and their advice FOLLOWED. He was a man like all of the WWII generals who knew war. Knew it from seeing it first hand. Not being chickenshit advocates like we have all over the District of Corruption. Isn’t it funny that liberals many of whom dodged the Vietnam draft are now the greatest advocates of war? See Dopey Joe for example… a man who had asthma so bad he couldn’t serve in Vietnam… but he could play college football.
ON a different note on the subject of military speeches: Have you ever read the text of Patton’s speech to 3rd Army prior to its embarking to the Normandy theater? It was transcribed from veterans memories later… The one that George C. Scott portrayed in the movie. The actual speech is funnier, more obscene and more inspiring… God you cannot beat those men today.
I enjoy your articles much here. Hope you keep writing.

Joker, no appology required Sir ! I enjoy your thought provoking comments as well as they make me think — please press on !

Uncommon valor shown in real life by real men. They were not sent to die; they were sent to finish off the Leftist Nazi war machine, knowing they might die while killing the enemy.

Compare to today’s America and the dead from D-Day are probably wondering what they died for.

Nazi were Ultra-Right not Leftist.

“Though almost eighty years ago, D-Day remains a testament to America’s altruism and greatness as a nation. No other sends its men and women to die in combat and expects nothing in return.”