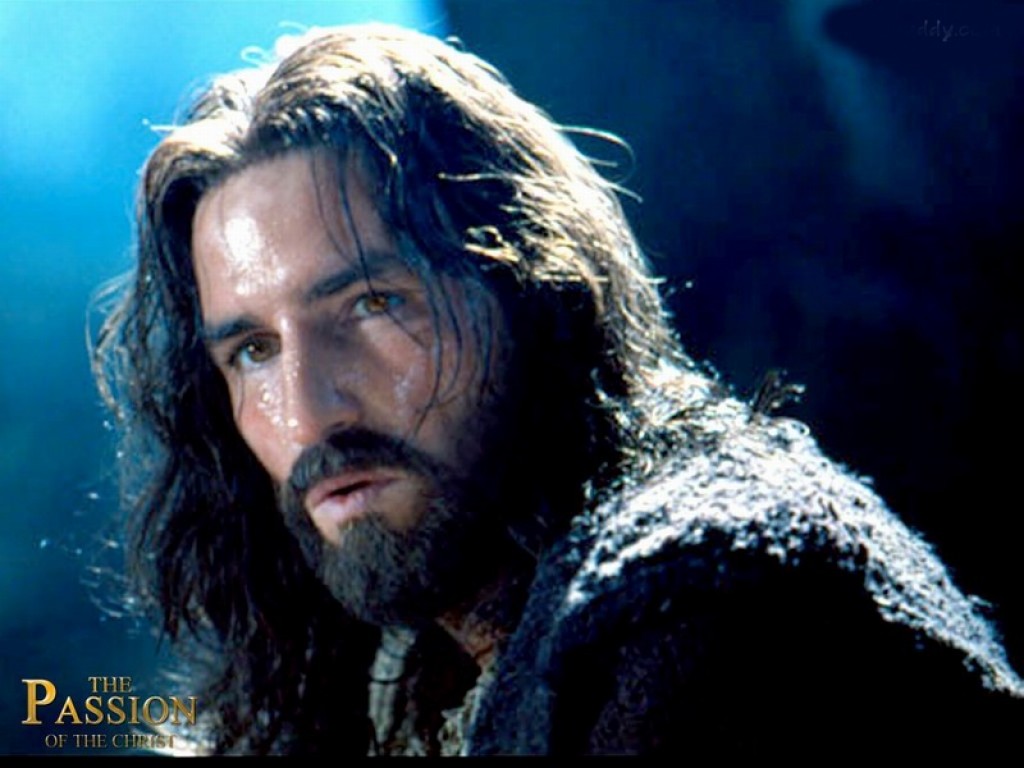 Jim Caviezel in "Passion of the Christ"

Throughout the 20th century it has been popular – especially among more theologically liberal Protestant denominations – to deny that Jesus was actually divine, but to agree that he obviously was a good man who presented excellent moral teaching: e.g., alms for the poor; render unto Caesar; judge not; love one another; etc. Some adherents of other religions have said something similar, although the major world religions don’t uniformly agree with this characterization of Jesus. Muslims used to say that Jesus appeared to be the only perfect man who ever lived – but lately, not so much.

People who lack knowledge of the New Testament are most of those who say Jesus was just a good man. Few of those well acquainted with the Christian Scriptures say this.

C. S. Lewis – a former agnostic who became one of the 20th century’s greatest Christian apologists – is famous for his many insights into the faith. One of the most brilliant of these was his demolition of the claim that Jesus was “just a good man.” He wrote:

“I am trying here to prevent anyone saying the really foolish thing that people often say about Him: ‘I’m ready to accept Jesus as a great moral teacher, but I don’t accept His claim to be God.’

“That is the one thing we must not say. A man who was merely a man and said the sort of things Jesus said would not be a great moral teacher. He would either be a lunatic – on a level with the man who says he is a poached egg – or else he would be the Devil of Hell. You must make your choice. Either this man was, and is, the son of God: or else a madman or something worse.

“You can shut Him up for a fool; you can spit at Him and kill Him as a demon; or you can fall at His feet and call Him Lord and God. But let us not come up with any patronizing nonsense about His being a great human teacher. He has not left that open to us. He did not intend to.”1

In other words (if any clarification is needed), Jesus was God, or a nut-case, or a very bad man. But he was not simply a “good man” who made some absurd claims about himself that we can delicately ignore.

This profound theological debate came to mind while I reflected upon the blazing career of Barack Obama. (Readers can relax. I don’t think he was either a new Messiah or the Anti-Christ. But I do think it’s important for us to describe him correctly.)

Mr. Obama came, seemingly, out of nowhere to take the country by storm in just a few short years. I recall a radio report just after the elections of November 2004, when this virtual unknown had dazzled Big Media on his way to winning a U. S. Senate seat. Reporters were discussing the possibility that this brilliant, articulate new senator might have presidential ambitions. One reporter thought it was a little early for that, since Mr. Obama hadn’t actually done anything yet. But others thought people would believe that he could do the job because he looked like he could. Ultimately, the election of 2008 confirmed the correctness of the latter view.

The wild adulation after President Obama’s election did have a messianic feel. I heard grown women in the grocery store gushing: “…he’s just wonderful – so well-spoken and well-dressed, such a beautiful family…” etc. Senator Joe Biden called him “… the first mainstream African-American who is articulate and bright and clean and a nice-looking guy.”

Young people expected him to change the country. It wasn’t clear exactly how he would change it, but who cared? Whatever the change turned out to be, the prevailing belief was that it would help the country and would be beneficial to them, personally. Schoolchildren sang “hymns” to their new president, in a rap cadence:

Mainstream Media reporters and pundits were giddy with anticipation over the most “transformative” presidency in American history. (Remember – media are always keen for “the conflict.”) The M-word (messiah) was on many lips; even the G-word. Newsweek Editor Evan Thomas said, “…in a way, Obama’s standing above the country, above the world; he’s sort of God.” It was an amazing time to be an American. Verily, it seemed too bad that the Inauguration couldn’t have been held on Easter Day to confirm the messianic verisimilitude.

Soon after the election, former classmates scolded me for my gloomy predictions of what Obama’s “hope and change” would bring to the country. (The One had just stiffed the GM bondholders, including moi, so I was a little sensitive about where he was heading.) My old classmates said there was more than one way to look at these things, and I should just “give him a chance.” (Translation: their ox hadn’t been gored.) They huffed back to their state of residence – a bastion of liberalism that would vote for a yellow dog on the Democratic ticket, and had gone overwhelmingly for Mr. Obama.

I never learned what those classmates thought about Mr. Obama’s two terms, but it’s pretty clear that many voters were under-whelmed. Whatever they hoped Mr. Obama’s “change” would be, what he produced was not it. While he was still in office I heard 30- and 40-somethings calling talk-radio shows to say, “Sure, I voted for him. He looked and sounded great. But I never thought he would screw up this badly…”

People out of work for months (or even years) were scratching their heads and saying, “Who cares about health-care reform when there’s no work?” Many voters were “mad as hell” and weren’t going to take it anymore, as we saw in the 2016 election. I’ll-be-queen Hillary never had a chance.

Following passage of the Affordable Health-care bill, Democratic pols were grousing about hateful phone calls from constituents. (“They said mean things to me. Don’t they know who I am?”) Instead of a happy face when he signed his precious Obamacare bill, Mr. Obama looked like he had a bad case of hemorrhoids. Federal agencies were on high alert for possible “domestic terrorism” from angry housewives and 80-year-old grandmas. (It was a “knitting-needle red alert.”)

Many true believers wondered when Mr. Obama would start being truly “transformative” – evidently not recognizing that he was exactly that. Some seemed to think that his early actions were only gestures to his far-left political base – or maybe just honest mistakes. (Don’t we all make mistakes?)

In other words, he couldn’t really mean all those comments about evil corporations, greedy insurance companies, stupid cops, and dishonest doctors performing unnecessary operations. Surely he was a good man who just wanted to help the country. Yes, he sounded a lot like a socialist, but he couldn’t really be one. Could he?

Jesus claimed he was God, so by C. S. Lewis’s analysis either he was God or he had to be nuts or seriously evil. Just so, we’ve come round to the same basic choices about President Obama. Was he a good man who just made some unfortunate mistakes? No, he’s obviously a smart guy; nobody makes that many “mistakes.”

So with “good man who made some mistakes” crossed off, what are we left with? That he’s crazy or self-deluded or evil; or he’s who he appears to be. Call me old-fashioned, but I don’t call someone “evil” unless he’s in Hitler’s or Stalin’s league. The Bible says only God sees the heart, so I’ll leave this call to Him. That leaves crazy, self-deluded, or true socialist as possible labels for The One. What say ye?

This wasn’t an easy choice. After all, Mr. Obama did some things that looked pretty crazy. A whole year spent pushing legislation that brought 1/6th of the nation’s economy under federal control, while 10% of our work-force stood idle, looked insane to me and many others. He got his health-care bill, but it was a pyrrhic victory which doomed his party to a crushing defeat in November 2010. Assuring Dems that it was worth losing their Congressional seats to get health-care reform didn’t seem like clear thinking.

I do harbor a nagging fear that the man might be seriously self-deluded about his personal ability to change the country and its politics. This isn’t quite the same as being crazy. It’s more like having a short circuit in your wiring. The Greeks called it “hubris.” It is not a valuable trait in a leader.

Ultimately, I concluded that Mr. Obama was exactly what he looked like and what he said he was. He let it slip in a few unguarded instances, like his unscripted exchange with Joe the Plumber in the 2008 campaign. Some of us caught on early, but after his two terms it was clear beyond peradventure of doubt:

Mr. Obama was (and is) a true socialist who believes government bureaucrats can manage the country’s economy and the health and education of its people better than they can.

A true socialist is convinced that individuals can’t make it without “government help” (a 20th century oxymoron as ever was). He believes the playing field must be leveled to achieve “social justice” – a construct wherein “winners in the Great Lottery of Life” subsidize losers. These beliefs have far-reaching consequences, as we are still finding out. Voters who thought Mr. Obama was just posturing for his far-left base, but never thought he would go as far as he did, got a rude surprise.

I don’t mean to poke fun at voters who got snookered. The guy looked great, and anyone can make a mistake. But as my pop always said, the great thing is to learn from mistakes and not repeat them. Millions of voters misjudged who Barack Hussein was. It took a political will of steel to turn the Titanic in 2016, but enough voters saw that we were going down if we didn’t change direction.

So, just for future reference – when the next silver-tongued dude wearing a $2,000 suit (or perhaps sandals and a tunic of camel’s hair) comes along preaching “hope, change and social justice,” let’s try to remember the lessons Obama taught us. If we’ve learned from his presidency, it won’t have been a total waste. With any luck, maybe we won’t have to go through all the “fun” again, before we grasp the reality about the Next One. As they say: “if it looks like a duck and quacks like a duck…”

This brings us to Joe Biden, who ran as a mystery candidate who said he would restore “normalcy” and good feeling. I ask those who voted for him:

Whatever some might have thought – if Joe Biden finally gets into the White House a lot of us are going to find out that he is exactly what he looked like during his non-campaign: a befuddled old guy with a dirty history of shaking down foreign governments for personal profit, who has no more answers for us than he ever had in his 47-year political career.

And he is going to stock his administration with such a gang of varlets, poltroons, and brigands that we’ll actually long for the “good old days” of Trump. But it will be too late.