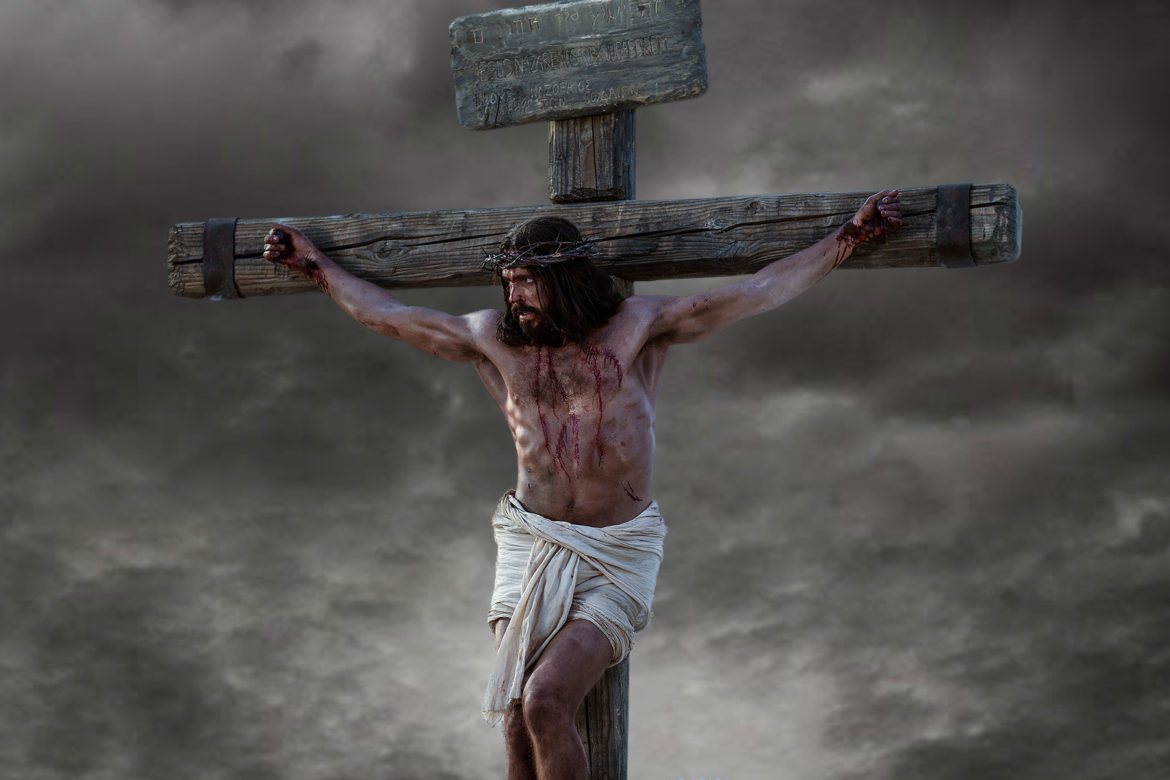 Just what happened on Good Friday

We often talk about crucifixion in rather bland terms.  And while some of us have seen movies such as The Passion of the Christ, most movies on the life of Jesus portray crucifixion as an unpleasant experience.  Crucifixion was one of the most ghastly punishments known to mankind throughout the ages.  Some thoughts on the final 24 hours of Christ’s life.

We will start the story in Gethsemane. Of the many aspects of this initial suffering, the one of greatest physiological interest is the bloody sweat. It is interesting that Luke, the physician, is the only one to mention this. He says, “And being in Agony, He prayed the longer. And His sweat became as drops of blood, trickling down upon the ground.”

Though very rare, the phenomenon of Hematidrosis, or bloody sweat, is well documented. Under great emotional stress of the kind our Lord suffered, tiny capillaries in the sweat glands can break, thus mixing blood with sweat.

After the arrest in the middle of the night, Jesus was next brought before the Sanhedrin and Caiaphas, the High Priest.  A soldier struck Jesus across the face for remaining silent when questioned by Caiaphas. The palace guards then blind-folded Him and mockingly taunted Him to identify them as they each passed by, spat upon Him, and struck Him in the face.

In the early morning, battered and bruised, dehydrated, and exhausted from a sleepless night, Jesus is taken across the Praetorium of the Fortress Antonia, the seat of government of the Procurator of Judea, Pontius Pilate. No one wanted to do the dirty work, and Pilate gave the job to Herod Antipas, the Tetrarch of Judea. Jesus apparently suffered no physical mistreatment at the hands of Herod and was returned to Pilate. It was in response to the cries of the mob, that Pilate ordered Bar-Abbas released and condemned Jesus to scourging and crucifixion.

Preparations for the scourging were carried out when the Prisoner was stripped of His clothing and His hands tied to a post above His head.

The Roman legionnaire steps forward with the flagrum (or flagellum) in his hand. This is a short whip consisting of several heavy, leather thongs with two small balls of lead attached near the ends of each. The heavy whip is brought down with full force again and again across Jesus’ shoulders, back, and legs.

The small balls of lead first produce large, deep bruises that are broken open by subsequent blows. Finally the skin of the back is hanging in long ribbons and the entire area is an unrecognizable mass of torn, bleeding tissue. When it is determined by the centurion in charge that the prisoner is near death, the beating is finally stopped.  I spoke recently to a shock trauma doctor at Winchester Medical Center, who stated that given the limited medical technology of the times, that by the time the beating was finished, that Christ was already on his way to death, and could not have survived that beating.  Likely the beating was so bad, that even given today’s medical advances, there would be no guarantees that any person who took that flogging could survive.

The half-fainting Jesus is then untied and allowed to slump to the stone pavement, wet with His own blood. The Roman soldiers see a great joke in this provincial Jew claiming to be king. They throw a robe across His shoulders and place a stick in His hand for a scepter. They still need a crown to make their travesty complete. Flexible branches covered with long thorns (commonly used in bundles for firewood) are plaited into the shape of a crown and this is pressed into His scalp. Again there is much bleeding, the scalp being one of the most vascular areas of the body.

After mocking Him and striking Him across the face, the soldiers take the stick from His hand and strike Him across the head, driving the thorns deeper into His scalp. Finally, they tire of their sadistic sport and the robe is torn from His back. Already having adhered to the clots of blood and serum in the wounds, its removal causes excruciating pain just as in the careless removal of a surgical bandage.

In deference to Jewish custom, the Romans return His garments. The heavy beam of the cross is tied across His shoulders, and the procession of the condemned Christ, two thieves, and the execution detail of Roman soldiers headed by a centurion begins its slow journey along the Via Dolorosa. In spite of His efforts to walk erect, the weight of the heavy wooden beam, together with the shock produced by heavy blood loss, is too much. He stumbles and falls. The rough wood of the beam gouges into the lacerated skin and muscles of the shoulders. He tries to rise, but human muscles have been pushed beyond their endurance.

The centurion, anxious to get on with the crucifixion, selects a stalwart North African onlooker, Simon of Cyrene, to carry the cross. Jesus follows, still bleeding and sweating the cold, clammy sweat of shock, until the journey from the fortress Antonia to Golgotha is finally completed.  (approximately 600 yards)

Jesus is offered wine mixed with myrrh, a mild analgesic mixture. He refuses to drink. Simon is ordered to place the beam on the ground and Jesus quickly thrown backward with His shoulders against the wood. The legionnaire feels for the depression at the front of the wrist. He drives a heavy, square, wrought iron nail through the wrist and deep into the wood. Quickly, he moves to the other side and repeats the action being careful not to pull the arms to tightly, but to allow some flexion and movement. The beam is then lifted in place at the top of the cross and the plaque reading “Jesus of Nazareth, King of the Jews” is nailed in place.

The left foot is now pressed backward against the right foot, and with both feet extended, toes down, a nail is driven through the arch of each, leaving the knees moderately flexed. The Victim is now crucified. As He slowly sags down with more weight on the nails in the wrists excruciating pain shoots along the fingers and up the arms to explode in the brain — the nails in the wrists are putting pressure on the median nerves. As He pushes Himself upward to avoid this stretching torment, He places His full weight on the nail through His feet. Again there is the searing agony of the nail tearing through the nerves between the metatarsal bones of the feet.

At this point, as the arms fatigue, great waves of cramps sweep over the muscles, knotting them in deep, relentless, throbbing pain. With these cramps comes the inability to push Himself upward. Hanging by his arms, muscles are paralyzed and are unable to act. Air can be drawn into the lungs, but cannot be exhaled. Jesus fights to raise Himself in order to get even one short breath. Finally, carbon dioxide builds up in the lungs and in the blood stream and the cramps partially subside. Spasmodically, he is able to push Himself upward to exhale and bring in the life-giving oxygen. It was undoubtedly during these periods that He uttered the seven short sentences recorded:

The first, looking down at the Roman soldiers throwing dice for His seamless garment, “Father, forgive them for they know not what they do.”

The second, to the penitent thief, “Today thou shalt be with me in Paradise.”

The third, looking down at the terrified, grief-stricken adolescent John — the beloved Apostle — he said, “Behold thy mother.” Then, looking to His mother Mary, “Woman behold thy son.”

The fourth cry is from the beginning of the 22nd Psalm, “My God, my God, why has thou forsaken me?”

Hours of limitless pain, cycles of twisting, joint-rending cramps, intermittent partial asphyxiation, searing pain where tissue is torn from His lacerated back as He moves up and down against the rough timber. Then another agony begins…A terrible crushing pain deep in the chest as the pericardium slowly fills with serum and begins to compress the heart.

It is now almost over. The loss of tissue fluids has reached a critical level; the compressed heart is struggling to pump heavy, thick, sluggish blood into the tissue; the tortured lungs are making a frantic effort to gasp in small gulps of air. The markedly dehydrated tissues send their flood of stimuli to the brain.

A sponge soaked in posca, the cheap, sour wine that is the staple drink of the Roman legionaries, is lifted to His lips. He doesn’t take any of the liquid. The body of Jesus is now in extremes, and He can feel the chill of death creeping through His tissues. This realization brings out His sixth words, possibly little more than a tortured whisper, “It is finished.”

His mission of atonement has completed. Finally, He can allow his body to die.

With one last surge of strength, he once again presses His torn feet against the nail, straightens His legs, takes a deeper breath, and utters His seventh and last cry, “Father! Into thy hands I commit my spirit.”

In order that the Sabbath not be profaned, the Jews asked that the condemned men be dispatched and removed from the crosses. The common method of ending a crucifixion was by crucifracture, the breaking of the bones of the legs. This prevented the victim from pushing himself upward; thus the tension could not be relieved from the muscles of the chest and rapid suffocation occurred. The legs of the two thieves were broken, but when the soldiers came to Jesus they saw that this was unnecessary.

Apparently, to make doubly sure of death, the legionnaire drove his lance through the fifth interspace between the ribs, upward through the pericardium and into the heart.  John 34:19 reports: “And immediately there came out blood and water.” That is, there was an escape of water fluid from the sac surrounding the heart, giving postmortem evidence that Our Lord died not the usual crucifixion death by suffocation, but of heart failure (a broken heart) due to shock and constriction of the heart by fluid in the pericardium.  Literally speaking, our Savior died from a broken heart.

This torture is described in Luke 23 in the one line:

Please remember this when enjoying your Easter Sunday.  Yes it is good to spend time with family and friends.  But remember that just like Christmas, Jesus is the reason for the season.

Special thanks to Dr. Truman Davis for all his help in teaching me.

Such a powerful recreation of the story. Thank you. It is agonizing to read and to contemplate. We must remember that, even today, brothers and sisters in Christ suffer and die along the roads of the Middle East, crucified by Evil doers, ISIS among them.