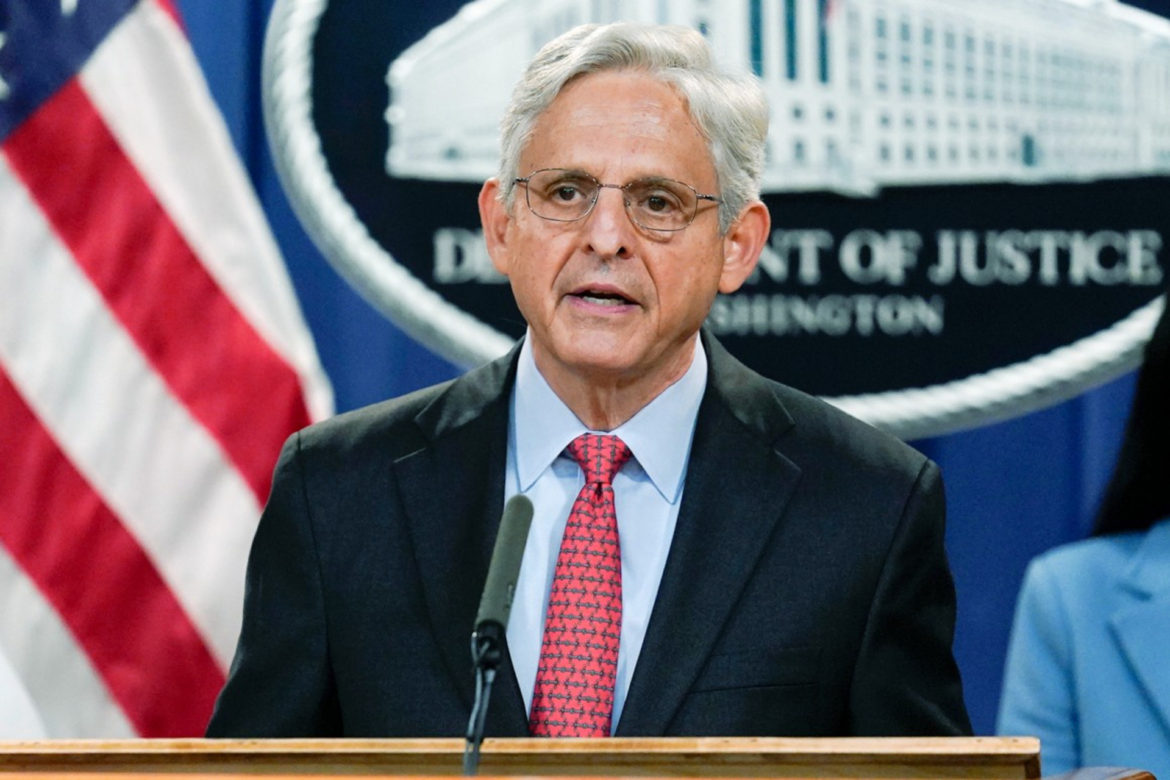 Speech doesn’t become a “threat” just because a government official calls it that. Yet the National School Boards Association got the Justice Department to open an investigation, after labeling parents’ speech as “threats and acts of violence” when it occurred in controversies over “critical race theory” and “masking requirements” in the public schools. As the Washington Examiner notes, “A few of the most outrageous examples of these ‘threats and acts of violence,’ according to the association, include a man filming himself while calling school administrators and another man labeling a school board as ‘Marxist.'” The NSBA’s letter lists as an example of such threats and violence “A resident in Alabama, who proclaimed himself as ‘vaccine police,’ has called school administrators while filming himself on Facebook Live.”

The NSBA letter falsely claims that “critical race theory is not taught in public schools and remains a complex law school and graduate school subject well beyond the scope of a K-12 class.” In reality, 20% of urban school teachers have taught or discussed critical race theory with their K-12 students, along with 8% of teachers nationally, according to a survey by Education Week. These percentages are even higher in high schools, where books by critical race theorists are much more likely to be assigned to students than in elementary schools. The Loudoun County, Virginia public schools paid a contractor to train their staff in critical race theory, giving it $3,125 to conduct “Critical Race Theory Development.”

The NSBA complained about a man filming himself talking to school administrators. But filming yourself is not threatening, and it is less intimidating than filming other people, which courts have ruled is still protected by the First Amendment. For example, courts have ruled that filming the police is free speech, in cases such as Fields v. Philadelphia (2017). If you can videotape the police during a tense encounter or an arrest, then you can certainly film yourself talking to school officials, even if they think their responses make them look bad to the public.

Speech can’t be punished just because it makes someone look bad and leads to them getting hate mail.  The Wisconsin Supreme Court made that clear when it ruled in favor of a conservative professor whose criticism of a bossy progressive instructor led to her getting hostile emails and hate mail from angry members of the public. (See McAdams v. Marquette University (2018)). So even if a school board receives angry emails after a parent calls films them or them “Marxist,” that’s still speech protected by the First Amendment.

The Justice Department’s response followed NSBA’s request that the Justice Department “intervene against … cyberbullying attacks,” and prosecute “these crimes and acts of violence under … the PATRIOT Act in regards to domestic terrorism,” the “Hate Crimes Prevention Act,” and federal civil-rights laws. The NSBA’s letter also lists some less benign conduct, such as unspecified alleged “physical threats” and the arrest of a man for supposedly committing battery and disorderly conduct at a school board meeting.

In response to the NSBA’s letter, Attorney General Merrick Garland said the Justice Department would investigate “harassment, intimidation, and threats” aimed at school officials or employees. But the conduct alleged by the NSBA is mostly heated rhetoric or bad publicity, not true threats that the government should prosecute. The Supreme Court has ruled that speech isn’t an unprotected threat, just because it contains harsh rhetoric, or someone feels threatened by it. For example, it ruled a man couldn’t be prosecuted for saying, “I have already [been drafted] and I have got to report for my physical this Monday coming. I am not going. If they ever make me carry a rifle the first man I want to get in my sights is [President Johnson].”

Government officials often feel “harassed” or “intimidated” by angry voters threatening to vote them out of office, but that doesn’t render such speech an unprotected threat. Voters have the right to threaten to remove school board members from office, even if government officials find that “harassing” or “intimidating.” As judges noted in striking down a school “harassment” code that restricted speech critical of homosexuality, “there is no categorical ‘harassment exception’ to the First Amendment’s free speech clause.” (See Saxe v. State College Area School District (2001)).

The NSBA’s complaint about “cyberbullying attacks” follows coordinated parent email campaigns against the teaching of critical race theory in the public schools. When recipients receive hundreds of angry emails, such as from outraged parents, they regard them as “cyberbullying.” That doesn’t mean that speech is unprotected just because it’s labeled as “cyberbullying.” People have a right to express their anger about government policies, even if they do so by the thousand, and that leaves school board members with thousands of angry emails in their inboxes.

New York’s highest court struck down a cyberbullying law as a violation of free speech in People v. Marquan M. (2014). That law restricted “sending hate mail” with “the the intent to harass, annoy, threaten, abuse, taunt, intimidate, torment, humiliate, or otherwise inflict significant emotional harm on another person,” which is how government officials often view angry messages from constituents. And it criminalized “disseminating … personal … information” — even if it’s not “false” or “sexual” — about any person, if it was done “with the intent to … annoy …, abuse, [or] taunt” and “with no legitimate private, personal, or public purpose,” whatever that might mean. Taping school board members saying stupid things could run afoul of that provision, such as the example the NSBA gave of a man calling school officials while on Facebook Live.

But legislators continue to pass overly broad laws against “cyberbullying” and “cyberstalking.” Indeed, the federal Violence Against Women Act already contains an overly broad cyberbullying provision that the Justice Department may attempt to use against parents. One judge found that certain applications of that law were unconstitutional in United States v. Cassidy (2011). As a result, the judge dismissed a prosecution over harsh, repeated criticism of a religious leader on Twitter, finding that the criticism was free speech. But Congress has since expanded the law’s reach even further, given Attorney General Garland a potential weapon to go after some parents.

The NSBA’s letter also cited federal civil-rights laws such as the “Conspiracy Against Rights statute” and the “Violent Interference with Federally Protected Rights statute. That is ominous, because there is a very real danger that the Biden administration, like past Democratic administrations, will misuse the civil-rights laws to censor speech. During the Clinton administration, progressive civil-rights officials investigated citizens for “harassment” and “intimidation” merely because they spoke out against, or used lawsuits to block, housing projects for classes of people protected by the Fair Housing Act (such as recovering substance abusers). These speech-chilling investigations came to an end in 2000, after the Ninth Circuit Court of Appeals court ruled such investigations violated the First Amendment, in White v. Lee (2000). But in 2017, liberal judges wrongly allowed condo owners to be sued for “interference” with civil rights, because they published angry blog posts that created a “hostile housing environment” for a disabled neighbor who later committed suicide.

Hey Eric and Company… it seems that a”transgender” student had sexually assaulted his daughter in a bathroom where you always claim this doesn’t happen. The POS Soros District Attorney who prosecuted Smith had to known of the assault…
Soros spent 845 K to elect that idiot DA…

I would take my children out of that F ing school system… It is time to defund this sort of lunacy too… If you aren’t using the damn thing you should get a voucher for private school or the cost of on line home schooling.

If Lowdown County re elects that idiot DA and this idiot school board… You get what you deserve.

In my outrage for the events of this Reichstag Fire event that the Maoists, Big Tech, Big .Gov are using again to silence people… I forgot to add that the Lowdown School Board, whilst claiming that there WERE NO assaults in bathrooms… had to have known of this assault. This poor father was justifiable angry. This isn’t white wing assault on your stupid School Board ProgFASCISTS… it was rightous indignation for a bunch of morons whose policies can get girls assaulted by their policies…
You idiots and your damn bathroom, sex identity politics etc…

“Minutes before Smith’s arrest at the June 22 board meeting, Loudoun County Public Schools (LCPS) Superintendent Scott Ziegler declared that “the predator transgender student or person simply does not exist,” and that to his knowledge, “we don’t have any record of assaults occurring in our restrooms,” The Daily Wire reported.”

Today (Oct. 11) The Washington Examiner “News Alert” reported – “School board associations in Louisiana and Virginia have denounced a letter sent to the Justice Department by the National School Board Association, contending local law enforcement is well equipped to handle any threats directed at school board members.”
However, when I went to the website to copy the quote above and then to click on the link to read the full story, I encountered a “Page not found.” I do not know why the continuation of the story is unavailable. Perhaps the story isn’t true of is being rewritten?

Report referenced in the letter:

“As the shouting continues, one man, grasping a U.S. flag on a flagpole walks quickly to the dais to confront board members, followed by Marysville police officers who step between the man and board members. “Yeah, run away,” taunts a protester, as board members file out of the room. “Go lick Inslee’s boot,” says one. As board members left the room, an object is thrown in their direction.

The confrontations continued outside as a group of protesters surrounded a district official’s car, preventing the driver from leaving.”

And from the letter itself:

“We are coming after you and all the members on the … BoE [Board of Education].”

Oh, yes, that sort of letter these actions should indeed be investigated and, if appropriate, prosecuted.

All parents know that once you take a child across a bridge and show them what is on the other side you cannot take back the experience. As good parents we decide what and when is the proper time in a child’s life to teach them certain things and discuss certain issues.
It is simply amazing that the majority of parents raise wonderful children only to send them to schools and they come home learning so much yet remain uneducated and this is because of School Boards ineptitude in gauging one’s education in reading & writing.
“We must confront them, we must push back, we must get in their face and let them know that they are not welcomed”
This November is a wonderful opportunity to push back from the top of the ticket all the way down.
Take back our Schools,
# Vote Republican

See above Eric… the case of Scott Smith.

I suspect Scott Smith is a lunatic or a liar…….or both