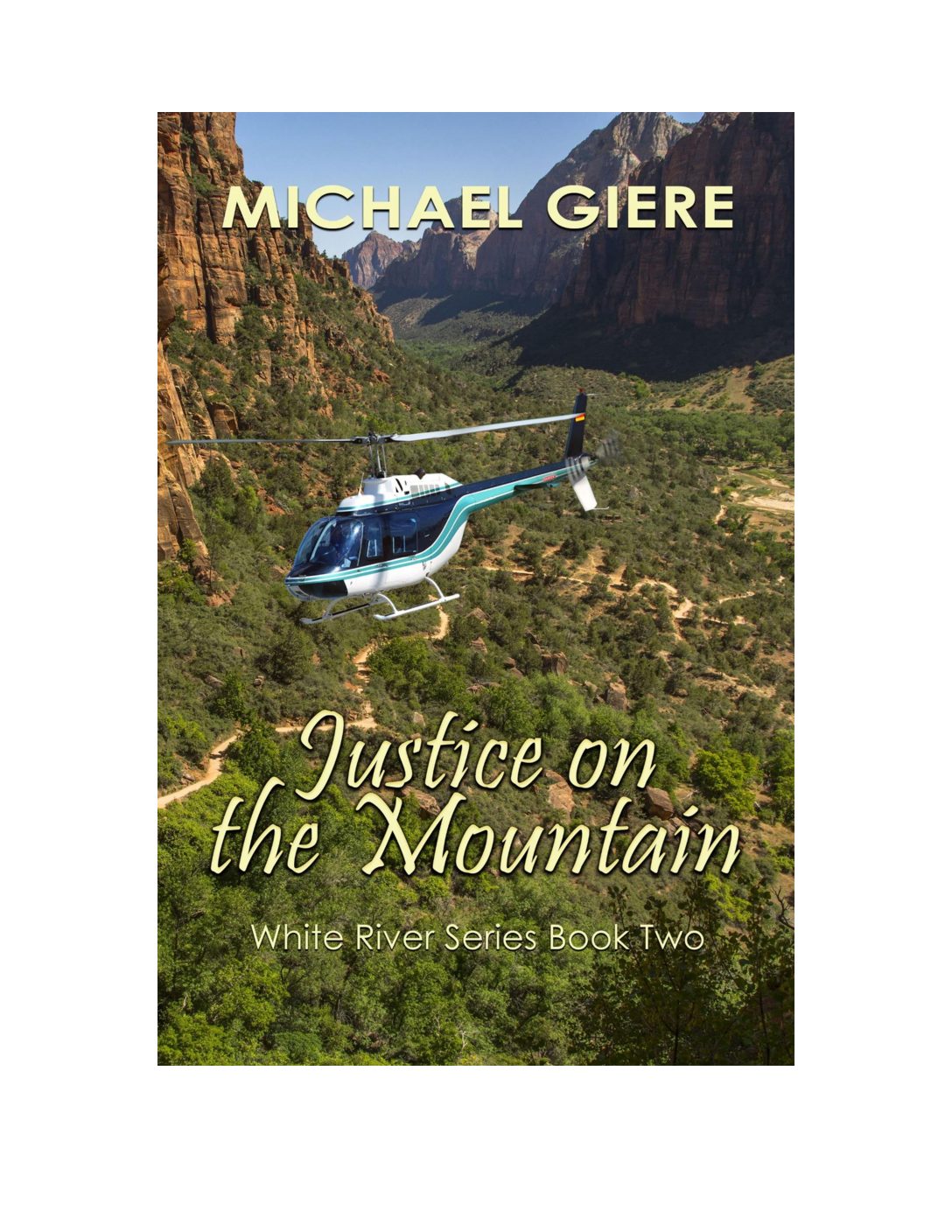 Justice on the Mountain

A novel by Michael Giere

Michael Giere’s latest novel in the White River series is a white-knuckle thriller chock-full of all the good stuff a Christian action-novel needs: courage, steadfastness, faith, love, and the ultimate triumph of good over evil. And through all the contention with the forces of darkness, the amazing grace of the Risen Lord shines through to anoint His people with resolve, bravery, nerve and peace in times of danger and great wickedness.

The characters on the side of good are strong, daring, and decent to the bone. Sharon Toro is a tall, athletic, 40-something sheriff’s deputy. She is married to Floyd Marshall, a mountain-resort trail-guide and U. S. Army veteran helicopter-pilot. They live at the Miner’s Trail hunting camp in the Colorado mountains, near Carbondale. Sharon works for Gus Smith, Sheriff of Garfield County, out of their Glenwood Springs office.

While answering a call about a boy lost in the mountains – a ruse intended to draw her into a trap – Deputy Toro is surprised, disarmed, and taken prisoner by a band of desperadoes, misfits, thugs and murderers holed up in a high mountain-compound, preparing to execute a multi-million-dollar drug transaction engineered by a Mexican drug cartel. The boy who lured her into the trap turns out to be the son of the gang’s leader. As she is being taken to the miscreants’ camp, she and the boy see his father murder the gang member who captured her.

Ultimately the purpose of Toro’s capture is revealed as a ploy to force her husband to fly a helicopter full of illegal drugs to a destination desired by the gang. Sharon’s kidnapping is the guarantee that Floyd will carry out that task. The story is built on the perilous situations of both Sharon and Floyd. But in the midst of her desperate plight, Sharon Toro is able to minister to the spiritual needs of the gang-leader’s girlfriend, who desperately wants to change her life.

I won’t spoil the reader’s own discovery of the many twists and turns of this gripping story. I’ll simply say that it’s hard to put down without finding out what comes next. As they say in the trade, it’s a real “page-turner,”

I lack the literary credentials to render a learned opinion on whether the plot of Justice is strong enough (it seems pretty strong to me), or whether more character-development is needed. A critic I rely on for my own literary efforts thought some of the characters could have used a little more development, but I didn’t see that as a serious flaw. This is the second book in Dr. Giere’s White River series. I haven’t read the first book, so I don’t know if any of the characters in Justice on the Mountain carried over from the first book.

What the secular media condescendingly call “Christian fiction” is often mocked for being too close to the 1950s genre of “Leave it to Beaver” or “Father Knows Best.” Hard-nosed critics use terms like “syrupy,” “milquetoast” and “unrealistic” to describe stories built around themes of decency, charity, goodness, altruism, faith, love and courage. “No one lives or acts like that now,” they say. The contemporary literary ideal seems to be stories of irredeemable wickedness and degenerate living in which the “good guys” are distinguishable from the “bad guys” only by fine points of law.

Americans from the Normal Culture are reminded – almost daily – that we live in a world full of all manner of evil and people entirely given over to it. Everywhere the power of Satan seems ascendant, and only the grace of the Living God can stand against it. In that respect, Justice on the Mountain reflects today’s world perfectly. It suffers from no lack of realism. I recommend it to believers, unbelievers and any who find themselves in between. We could use more like it.

Published by World Castle Publishing, 304 pages. Available in hardcover, softcover and e-Book from Amazon, Barnes & Noble and other booksellers.

Justice on the Mountain was last modified: November 1st, 2017 by Woody Zimmerman

This is pretty good, you will probably get a B or B+ when you hand this book report in to your teacher. Try including some thought on how this book affected you to get it into the A range.