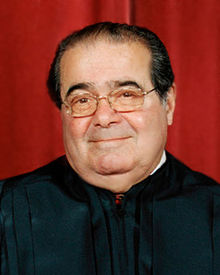 Justice Scalia’s Passing is a Time for Choosing for Senate Republicans.

Today Americans learned the tragic news of the passing of Justice Scalia. For the last three decades, Justice Scalia has been a lightning rod on the court. He has been a vocal defender of a strict interpretation of the U.S. Constitution, who was known for his wit, and willingness to speak his mind. Vilified by the left, and loved by the right, he has been one of the longest reminders of President Reagan’s legacy.

As a confirmation hearing approaches for President Obama’s nominee to replace Justice Scalia, the Senate Republican Majority faces its moment of truth.

“Every time the Supreme Court defines another right in the Constitution it reduces the scope of democratic debate.”

In the 70’s, the progressives resorted to the Supreme Court to pass a radical agenda for the country that they knew they couldn’t pass democratically. It eliminated the ability for the country and states to figure out what was best, and adapt over time, and as a result polarized the nation. Since then the question for every judicial confirmation has been whether the nominee will support the left’s agenda, or defend the constitution.

In 1987, the tension erupted to the surface in the confirmation over Justice Bork. President Reagan nominated Justice Bork to replace, Justice Powell, one of the “swing votes” on the court.  Even before Justice Powell’s resignation, liberal Senators and interest groups made it clear that they expected his replacement to “maintain the balance of the court.”

Within an hour of Bork’s nomination, Sen. Kennedy took to the floor of the U.S. Senate to declare, “Robert Bork’s America is a land in which women would be forced into back-alley abortions, blacks would sit at segregated lunch counters, rogue police could break down citizens’ doors in midnight raids, schoolchildren could not be taught about evolution, writers and artists could be censored at the whim of the Government, and the doors of the Federal courts would be shut on the fingers of millions of citizens.”

Sen. Biden chairing the Senate Judiciary Committee, lead a campaign of misinformation, halftruths, and distortions against a judicial scholar they disagreed with. The term “Borking” was coined, and in a rare action, the Senate voted down President Reagan’s appointment of Robert Bork to the Supreme Court. (Only the year before, Antonin Scalia has been approved by a vote of 98-0 in the U.S. Senate.)

In The Ugliness Started With Bork, Joe Nicera opined in The New York Times “The Bork fight, in some ways, was the beginning of the end of civil discourse in politics… The anger between Democrats and Republicans, the unwillingness to work together, the profound mistrust–the line from Bork to today’s ugly politics is a straight one.”  Nocera cited Democratic activist Ann Lewis who acknowledged that if Bork’s nomination “were carried out as an internal Senate debate we would have deep and thoughtful discussions about the Constitution, and then we would lose.”

Anthony Kennedy was appointed, and the progressives received their justice.

In 2000, President George W. Bush ran for president promising to appoint strict constructionists to the Supreme Court. Almost immediately, he began delivering with his nominations for circuit court vacancies. From Day One, the left attacked every move, holding up nearly a dozen nominees for the bench. Battles over Miguel Estrada, Priscilla Owen, Janice Rogers Brown, William Pryor, Charles Pickering, and others dominated the early Bush presidency as Sen. Schumer and others gave President Bush one of the lowest Circuit Court confirmation rates.

Debates over the “nuclear option” and “The Gang of 14” resulted as Senators worked to resolve the logjam.

When President Bush appointed Justice Alito to the Supreme Court, the vote was nearly a partisan vote, 58-42. The Democrats made it clear that deference to president’s appointments was gone.

“What is a moderate interpretation of the text? Halfway between what it really means and what you’d like it to mean?”

Ironically, when President Bush was considering who to nominate to the Supreme Court, Sen. Biden brought back up the issue of “balance on the court.” On Face the Nation on July 3, 2005, he stated, “The bottom line is that whenever there has been a balance in the court that would change with the replacement of a nominee, the nominee has been more closely looked at relating to that balance.”

With the radical shift we have seen from President Obama on the 4th Circuit and other lower courts, we know how serious they left is about maintaining balance on the courts. Just like the left tells the left not to talk about social issues as they steam roll through with their radical agenda, “balance on the court” is merely another way to silence the right as progressives march forward. No one seriously expects the president to nominate someone in the “mold of Scalia” to replace Scalia.

To honor Justice Scalia, the Senate needs to make sure President Obama is unable to replace the justice. Any nominee from President Obama should be stalled, and thoroughly exposed as a tool to advance the left’s undermining of the constitution.

At a time when America’s institutions are under attack, the left is finishing their assault on the document which founded and binds our nation, the U.S. Constitution. As the rule of law is traded for the rule of five Justices, the existence of the Republic is at stake.

“If you’re going to be a good and faithful judge, you have to resign yourself to the fact that you’re not always going to like the conclusions you reach. If you like them all the time, you’re probably doing something wrong.”

Talk is cheap, and actions are what matter. So far the Republican Senate Majority has been impotent in stalling President Obama’s assault on the courts. For all the statements about Eric Holder’s radical agenda, the Senate approved and even more radical replacement in Loretta Lynch as U.S. Attorney General. While the Democrats were willing to play hard ball with President Bush’s nominees, Senate Republicans have shown much less spine.

While they have refused every other opportunity, Senate Republicans must draw a line in the sand here.

Let’s have the debate over the role of the U.S. Constitution, and the future of the country.

Who will take to the floor of the Senate when it opens this week, and make it clear that no Obama nominee to replace Scalia will pass out of the chamber?

Will Sen. McConnell show the country his understanding of Senate rules and procedures?

Will Sens. Cruz and Rubio show their leadership in the Senate, and make the nomination about the vital role of the courts?

In 2004, President Bush campaigned hard talking about the role of the courts. It has now been forced into this election. Let’s ask every presidential candidate about their legal philosophy. While Democrats have had a perfect record with their nominations, Republican nominees have been a very mixed bag, which has created devastating consequences for the nation.

We need to nominate a candidate who will be more willing to spend political capital on Supreme Court nominees than President Reagan was, and we need to have the debate about whether we still are a Constitutional Republic all the way to November.

This is the moment of truth for Senate Republicans. What do they value, and how hard are they willing to fight for it?

This is also a moment of choosing for the future of this country. Let us honor Justice Scalia’s memory by fighting for the Constitution as hard as he fought for it in his three decades on the Supreme Court.