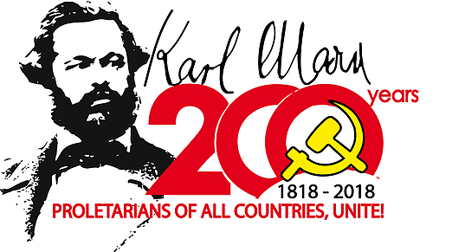 On May 5, 2018, the Marxists, sponsored by the World Workers Party, will be gearing up in New York to celebrate 200 years since the birth of their communist guru, Karl Marx, the one man whose philosophy had enabled the killing of more innocents than many global wars combined.

The theme is Marx @ 200, the Class Struggle in the Age of Trump. I am not sure what class struggle they are talking about unless it is the constant hateful rhetoric coming from the left and their Democrat Partyâ€™s divisive and anti-American platform because Donald Trump won the election and they have not gotten over the devastating loss.

Perhaps the class struggle they are Â raising involves the middle class that goes to work every day and struggles to pay their bills, expensive Obamacare insurance, and doctorsâ€™ visits, while they pay taxes to support financially and medically the permanent welfare underclass created by the Great Society and by the carefully-planned global invasion by illegal aliens and economic refugees from the flotsam and jetsam of the third world whom we generously support to the detriment of our own veterans who go untreated and uncared for even though we, as a nation, promised to take care of them in old age.

A quick search on the web reveals that â€œThe Workers World Party is a revolutionary Marxist-Leninist communist party in the United States. Founded in 1959 by a group led by Sam Marcy of the Socialist Workers Party, Marcy and his followers split from the Socialist Workers Party.â€ Among their goals, â€œno war in Syriaâ€ stands out prominently, no war in Korea, fight racism, no borders, to unite the workers and oppressed people of the world through revolution, to abolish capitalism, and to support the cause of the Palestinians which is to obliterate Israel.

The celebrated â€œheroâ€ in New York, Karl Marx, is the founder of â€œscientific socialismâ€ whose ideas, in collaboration with his friend and benefactor Friedrich Engels, launched decades of pain and suffering, famine, killings, tortures, and forced labor camps for those whose ideas were divergent from communism, punished to re-education in the infamous gulags. The Marxist philosophy caused more than a century of oppression of people struggling to survive day by day under communist utopia.

In 1980, when I showed a prospective American university my transcript from the communist country I lived in for 20 years, the advisor laughed when he saw â€œscientific socialismâ€ as a course. He told me that they donâ€™t give college credit for Marxist indoctrination. Back then Americans and college professors understood the evils of communism. Today they would probably give me six hours credit and a trophy. There is nothing scientific about socialism and it certainly does not take care of people as the name implies. (Socius, comrade, ally) Just as there is nothing â€œsharedâ€ under communism except misery, pain, and suffering. (Communis, shared)

According to the flyer advertising the event in New York, the â€œyoung, militant new movement of today is rising.â€ The questions that will be drilled into confused brains full of mush during these indoctrination workshops are:

The curse of cultural Marxism masquerading as progressivism is picking up speed around the globe, enabled by the vaunted halls of academia and by leftist billionaires with capitalist money to burn, Hollywood activists who were high school dropouts, and the mainstream media.

An interesting question remains, how do rational Americans believe Democrats and their fellow travelers who use capitalism to promote socialism?

Thanks Ileana, welcome to TBE. After reading Marx as a young man, I wondered if he really believed his own pseudo-intellectual claptrap. It made no sense then, and less now, after a hundred years of monsters trying to implement what he preached, or some version of it. All the laws of nature work in direct contradiction to the various socialist/utopian models, and in practice they always end one way; a tiny cabal uses brut force, mass theft and finally murder to accomplish and hold absolute power.
You can see a modern model ninety miles off our shores in Cuba, or further south in Venezuela. You can see it building in Western Europe right now as the social democrats start their war on association and free speech and free thought. It can and will end only one way.
(I commend Paul Johnson’s classic “Intellectuals” to the readers, where he provides some real-life background on Marx, among many others who shaped the modern era. Many of them, like Marx, were simply evil and demented.)

Having actually read the volumes of Karl Marx and and his generally long forgotten colaborator Friedrich Engels in my very distant college days I would have to say from my recollection their focus on the exploitation of the industrialized working class by a global capitalized elite shares almost NO intellectual basis with any tenet of todays left wing radical progressivism that attempts to pass itself off often as some form of Marxist socialism.

Cultural identity prioritization, revival of the notion of cultural segregation, gender politics, grievance as social policy, the state as a welfare entity are very alien to Marx and Engels’ fight for the working individual to recover and be rewarded with the fruits of their labor (the point here is labor or “work” not exactly a modern progressive hot button). I believe these 19th century social philsophers might actually be appalled at what is passed off today in the name of their doctrines.

If the World Party Workers were ever able to see past their butchered and misunderstood Marxian dogma and perhaps read the works of their movements so called founders they might be somewhat shocked to come to the realization that perhaps their upcoming NYC meeting might be more appropriately held at Trump Towers than Democratic progressive Elizabeth Warren’s local re-election office. Am I claiming Trump as an adherent of Marx and Engels (for the NeverTrump infestation at this blog) – of course not that would be silly.

What I am saying is that today’s political left (and even certain factions of the right) don’t give one hoot for the actually well being of the working individual they so constantly wrap themselves in. Modern populism’s concern for the world working class is in fact the very thing these perverted socialists sects so constantly rant against. Lenin put a stake through the heart of Marxism well over one hundred years ago and what we are left with today are various blends of state totalitarianism mixed with a little neo fascism including the American varieties and the one the Democratic Party has adopted and mislabeled progressivism to make it’s nature seem more benign.

I do fear for this nation. Fabian Socialists devised an great plan: Infiltrate public and higher education, indoctrinate the young, Now this is bearing fruit, as evident by the election of Lee Carter- Democrat(ic-Socialist) in the VA-50 HOD. This electoral success has emboldened others, and I believe they will ride the 2018 “Blue Wave” into congress, once again “Feeling the Bern”.

The question is who will win the struggle for the totalitarian prize – the atheistic global socialist or the Islamic religious ideologues. Both enslave and kill with righteous fervor. Right now, the former is in the ascendancy in the USA while the latter is in the ascendancy in much of the EU. Standing in the way is the right of citizens to be free and defend themselves against these evil forces.

It is most unfortunate that the Democrat Party and far too many Republicans do not appreciate what is at stake.