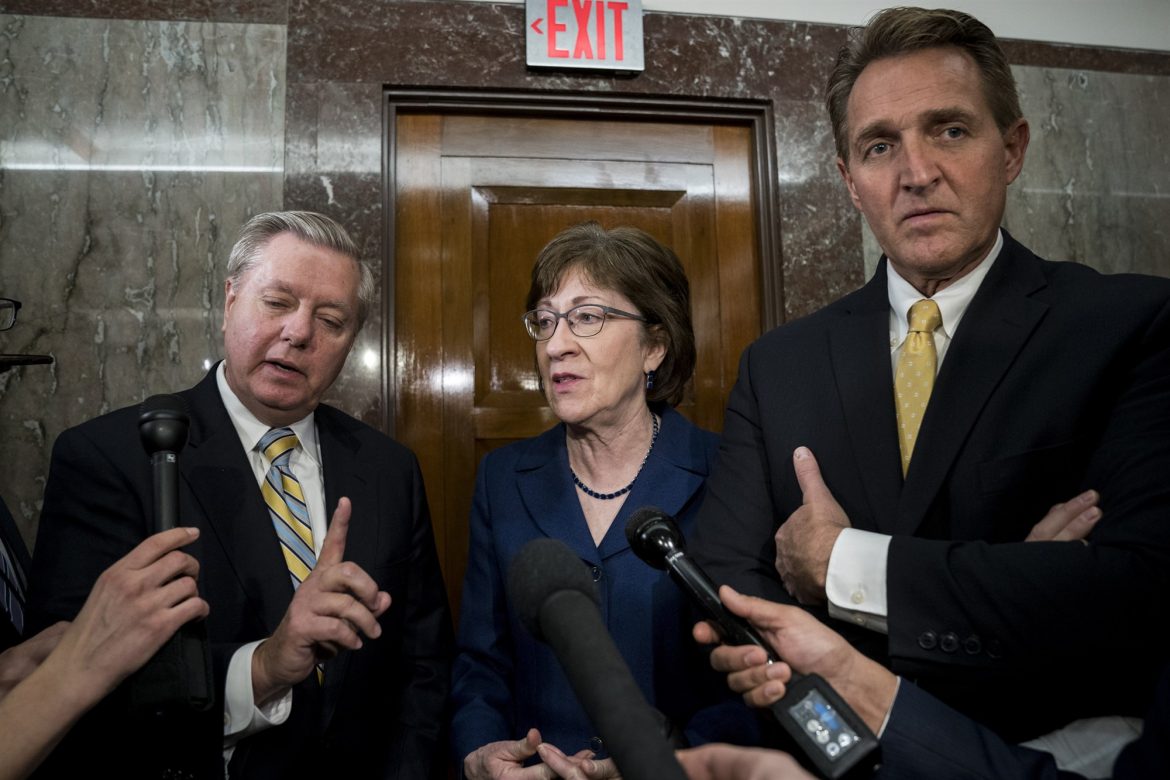 Sens. Graham and Collins become unlikely GOP heroes in energizing the base for the mid terms

GOP and conservative activists who are not involved in government and decision making sometimes forget that an elected member’s FIRST obligation is to his or her constituency.  So, when election time comes, a number of us sit there, grumble and grouse and claim to be “conservatives first, Republicans second,” and just CANNOT think of voting for THAT kind of Republican. So, the Democrats win the elections – especially here in Virginia.

Ideological purity seems to trump Ronald Reagan’s 11th Commandment, “Thou shalt not speak ill of any fellow Republican.” Perhaps the 2009-2012 Tea Party revolt had a lot to do with bucking so-called “establishment” Republicans, and even Donald Trump’s election in 2016 (despite the fact Trump is really more of a pragmatist than an ideologue).

And, because of Trump’s transformation of the Republican Party, we now have a core of moderate and conservative “never Trumpers” to contend with.

However, there’s a lesson we all need to learn with the recent 50-48 vote to confirm Brett Kavanaugh as an associate justice of the Supreme Court. That’s because it was an unlikely trio of maverick and moderate Republicans in the Senate who came through to confirm Kavanaugh, and galvanize the GOP base for the upcoming midterm elections, which are so critical for Republicans to win to keep the radical Democrats out of power.

Specifically, I am referring to Sens. Lindsey Graham (SC), Susan Collins (ME) and Jeff Flake (AZ) – yes, the very people conservatives have called RINOs due to their past votes, compromises and anti-Trump statements.

I have resented a number of Flake’s statements about Trump but let’s face it – his move to delay the vote for additional FBI background checks helped defeat the innuendo and lies about Kavanaugh.  That report, if the administration releases it, could further advance logic and reason over emotion and innuendo.

Graham has not been one of my favorites either over the years.   But his battle cry defense of Kavanaugh and attack on the Democrats during the hearing with sexual assault accuser Christine Ford has fired up the base of the party like nothing I have seen.

And the ultimate savior of Kavanaugh was that Maine moderate who is often accused of being a RINO (Republican in name only) and fence sitter, Susan Collins.

Even Sean Hannity said her speech on the Senate floor in defense of voting for Kavanaugh was “among the best I have heard in my life.”

Collins, who supports abortion rights and frequently criticizes the president, is a fence sitter and yes, I regrettably called her and Flake RINOs on my Facebook page when their decisions on Kavanaugh seemed in doubt.

But she came through to get Kavanaugh confirmed and her rational and well-measured speech on the Senate floor is being replayed on TV over and over.  She now is being praised for leadership in wake of a $3 million “GoFundMe” effort to unseat when she is up for re-election.

I still feel as I wrote on these pages some weeks ago that female voters could be galvanized to vote for the Democrats, particularly in raced with appealing female candidates, such in Virginia with Abigail Spanberger, challenging Dave Brat, and Elaine Luria, challenging Scott Taylor.

But we can now be more optimistic.  An NPR/Marist Poll shows that Republican interest in the mid terms has grown dramatically due to the Kavanaugh escapade.   If Republicans can pick up more Senate seats, that could be sufficient help to House GOP candidates win so we keep the House.

Note I said “we,” as in ALL Republicans benefit if WE keep the House, and the country benefits most of all.

So here’s the lesson.  Sometimes, that elected Republican who does not vote the party line all the time can, indeed, come through when the party needs it, and I wish the activists would be more forgiving and unified when those Republicans need the help to get elected.

Remember that we are better off with Barbara Comstock, Scott Taylor and Dave Brat back in the House than the Chameleon-crats they are now facing.  Didn’t these 3 along with Graham and Collins back the tax bill that is spurring our economy? Yes, they did.

I hope you will remember Reagan’s 11th Commandment the next time Sens. Collins or Graham, or any Republican, doesn’t vote YOUR way on an issue.

I speak from experience on this.  The 2012 vote by the Republican Loudoun Board of Supervisors, particularly my pivotal vote, to bring the Metro Silver Line into Loudoun County still harbors resentment from a few party activists, who tend to forget we set up a funding mechanism for Metro that saves some 95% of homeowners from paying for it on their taxes.  Plus, they forget all the other votes we took to keep down property taxes, improve the business and jobs base, among others.

So, for you conservatives now cheering Graham and Collins, if they vote against you on an issue the next time, remember and appreciate how they came through for Brett Kavanaugh and energized the GOP base for this upcoming election to give the Democrats the ass-beating they deserve for what they pulled in the Senate this past month.   And, let’s stop using the RINO term.

Please get out and canvass, make calls to win Nov. 6.

Kavanaugh vote shows that sometimes those ‘RINOs’ come through for the party was last modified: October 8th, 2018 by Guest Contributor Ken Reid