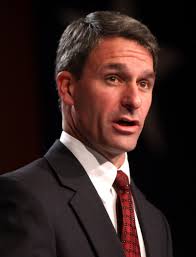 In a recent PPP poll Ken Cuccinelli is far ahead of other Republicans as the first choice among Republican primary voters for Governor in 2017,  37% chose Ken Cuccinelli as their first choice, 16% picked Eric Cantor, 8% each for Bill Bolling and Ed Gillespie, 7% for Mark Obenshain, and 1% for Pete Snyder. [read_more]

Among democrats only 46% recognize the name Mark Herring and fewer recognize Ralph Northam, only 37%, both of whom are likely candidates for Governor in 2017.

When Cuccinelli is matched against Herring, the results are a tie at 38%. Gillespie is the strongest candidate against the Democrats.