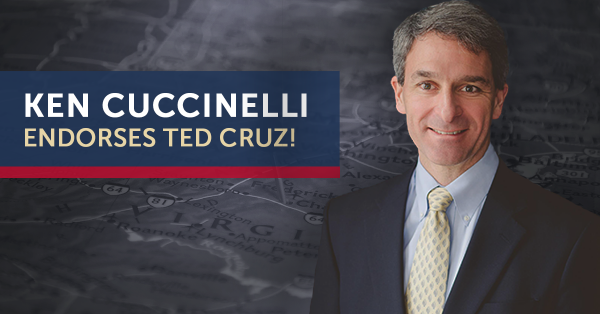 Former Attorney General and Ted Cruz supporter Ken Cuccinelli has penned an open letter to Republicans who, like me, supported Rand Paul. I must admit that Cruz does seem like a natural fall-back plan but I seem to be having a harder time than I anticipated in settling for Cruz. Cuccinelli makes his case, your thoughts?

To All Friends of Liberty,

I know many of you have been supporting Senator Paul for President and today I want to now ask you for your support for Senator Ted Cruz.

I understand your view that Rand has been the most passionate defender ofcivil liberties and personal privacy – not just in the U.S. Senate, but anywhere in government today. I agree with you.

While I don’t expect you to view Ted Cruz the same way you viewed Rand Paul, I would respectfully suggest that when it comes to protecting civil liberties and the privacy of law abiding citizens, Ted Cruz is – by far – the strongest remaining candidate among any of the GOP contenders for President. In fact, as best I can tell, most of the other remaining candidates consider protecting civil liberties a vice rather than a virtue! Rand exposed several of them in the debates (Christie and Rubio) and, without your support, one of them may very well win the GOP nomination for President.

Ted has never sacrificed his commitment to protecting our entire Constitution – including the Fourth Amendment.

But there’s a good chance that Ted won’t win without the support of liberty-minded Republican voters.

Rand has also been a leading voice for limited government – a passionate shared commitment which Ted has demonstrated in the U.S. Senate. I would point you to the example of Iowa as evidence of Ted’s commitment to limited government. Of all the candidates to run for President since Big Corn started getting ethanol subsidies and artificial regulatory advantages (cronyism), there have only been three candidates ever to go to Iowa and make the case that Big Corn’s special treatment by the federal government is wrong. Those three are Ron Paul, Rand Paul, and Ted Cruz.

Both Rand and Ted went into Iowa asking for votes this past year, and if they were less committed to their principles, they might have backed down from their commitment to ending Big Corn’s ethanol subsidies. Most people said that with Ted’s ethanol position, he didn’t stand a chance in Iowa. The Iowa establishment even carried on an “anybody but Cruz” campaign in a desperate attempt to crush opposition to ethanol subsidies forever. Yet we won!

We won because Ted told the truth about special interests and how they are polluting our politics, and we won raising the banner for free markets and warning of the danger of Washington picking winners and losers.

So, I would ask you to consider this question as you contemplate whom to support going forward: If you think that cronyism (in both parties) is corrupting and bankrupting our government, why would you expect any candidate who won’t tell Iowans the truth about ethanol subsidies when he or she needed their votes to go to Washington and tell the 10,000 other special interests that their gravy train needs to go away?! It isn’t going to happen.

If you’re as furious as I am about special interest influence and the Washington cartel, then I ask you to throw your support to Ted Cruz!

On the issue of the Fed, the leadership of both Doctors Paul (Ron and Rand) has successfully changed the thinking of most grassroots Republicans, as well as others, about the damage of the Fed’s irresponsible loose money policies. If you help Ted become the next President, he will sign a re-elected Senator Paul’s Audit the Fed bill, and that’s just a start!

Finally, I also want to acknowledge Rand’s leadership in fighting for criminal justice reform. Again, Ted is not in exactly the same place on these issues as Rand, but unlike much of the GOP field, Ted is open to the need to reform our criminal justice system.

In Ted’s native Texas, former Texas Governor Perry led the nation to achieve exactly such improvements in Texas over the last ten years. Today, Texas enjoys one of the lowest crime rates it has ever had during my lifetime and they reduced their budget at the same time. If tough-on-crime Texas can find ways to reform its criminal justice system while making Texans safer, there is no reason we can’t do it at the federal level too.

Ted’s record shows that he can be trusted to support the implementation of meaningful reform to make America safer, to make real the opportunity of redemption for those who have done wrong, and to save taxpayers’ money – our government is bankrupt after all!

Senator Rand Paul’s election to the U.S. Senate in 2010 was a blow to the establishment and a great day for liberty. I look forward to his re-election this year, hopefully by a big margin! And if many of you in the liberty movement join us in support Ted Cruz for President, then I hope in the years to come to see a President Cruz signing bills from Senator Paul that will reduce government’s footprint in your life and advance the cause of liberty.

To achieve all this, we need your support. With Senator Paul’s departure from the Presidential contest, Ted Cruz is the only candidate running for President who would advance all four of these causes that have been so ably championed by Rand Paul.

To protect your civil liberties, to roll back special interests and the Washington cartel, to reign in the Fed, and to advance criminal justice reform, we need your support for Ted Cruz for President.

Please join with me today to continue to advance the cause of liberty in the GOP Presidential nomination contest by supporting Ted Cruz (www.TedCruz.org).