Chairman of the Federal Election Commission Lee Goodman spoke out on Wednesday against the troubling impulse at that agency to attempt to regulate political speech. 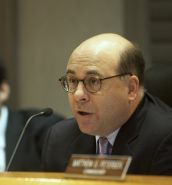 Goodman stepped down from his post as Republican Party of Virginia General Counsel last year to accept appointment to a Republican seat on the FEC. Since his appointment, Goodman has been elected Chairman, and has used that position to highlight disturbing tendencies among his colleagues to believe they have the right to regulate the political content of media outlets for their potential to be equivalent to unreported campaign donations.

In an interview with Fox News, Goodman said “The impulse to regulate the media within the FEC is alive and well.”

Goodman pointed to several recent decisions and developments that stoke concerns about the commission — which is supposed to regulate money in federal elections — sticking its nose in the affairs of the press.

Goodman voiced concern that [content of media coverage] was seriously considered at all, saying the commission was in the position of trying to “second guess the editorial decisions” of the network.

The consideration, he said, “clearly indicates that there are people in the FEC who believe we have the power to regulate the media.”

Goodman also pointed to recent cases where the FEC was deadlocked, 3-3, on cases he argues should have been unanimously struck down. This includes a 2010 complaint about “The Sean Hannity Show” over an endorsement that went out on the radio show’s distribution list.

Goodman, a Republican, has raised concerns that the FEC could try to specifically regulate conservative media, by chipping away at a media exemption in FEC rules.

But he told FoxNews.com he supports a “broad and absolute media exemption for all press,” no matter their political leanings.

Even though the FEC has not yet actually acted on any of the impulses Goodman has identified, not only is the Commission just one vote away from tipping towards what amounts to federal censorship of political speech, even with the current split vote media outlets have to think twice about just how free they are to make their own news decisions. “Split votes kill activity,” he said.

Kudos to our friend Lee for standing up for free speech! Well done, sir! Please keep up the good work.