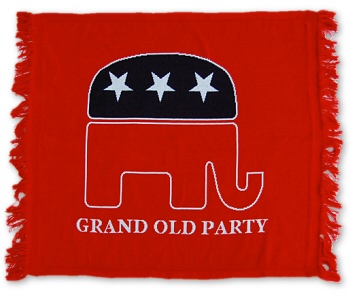 Lack of Leadership on the Right

This article is not written to argue about the certain disaster Donald Trump represents to the GOP and to the nation. This article, rather, is to present a warning to those so-called “leaders” of the Republican Party who apparently hope to avoid committing to a stance in this conflict, just as they are so fond of dodging controversy in all their carefully arranged show votes and non-confrontational, pandering, send-more-money emails.

One of the foremost concerns in determining our future as a party or a movement is to determine, once and for all, the caliber of those purporting to be leaders of the Grand Old Party, whether they are elected party officials or elected public officials under the Republican Party banner, so that those of us who have identified as Republicans in the past, due to the conservative principles it’s stood for, may determine whether to leave the Republican Party for good, or to finally realize that the Republican Party has already left us. (It should be noted that the same critique goes for the supposed leaders in the self-styled “faith community,” who are giving the Church an honest chance to determine if we really support and endorse this notion of “Patriotic Evangelicalism” that has apparently been passing itself off as Christianity for many years.)

There is ample evidence of cowardly “leaders” pretending not to embrace Trump as they slowly realize just how unpopular he really is.[1] This fits a growing pattern of behavior we have observed during this entire primary season, that of shameless opportunists who were quick (or willing) to jump on the Trump bandwagon as it seemed to gather momentum, only to discover gradually that this purported bandwagon has only ever been an attempted stampede, and that the voters simply aren’t having it.

The truth is, these people are not leaders: they’re merely sycophants whose lifestyle (in many instances, the DC-based high life of power, money, and cocktail parties) hinges on serving the whims of some modern-day patron, while pretending that they actually serve the interests of their constituents. They don’t really like being stuck with such a boorish, disagreeable patron as Trump, but they’d far rather have him as their mascot, despite the inconvenience of repeatedly being put to the trouble of pretending to repudiate his more egregious statements, than lose the cozy, familiar comfort of their privileged patronage system. That tension—between what their constituency and all principles of decency and common sense require of them, and what their own self-interest demands—is what this farcical charade is really all about.

The ones pretending to hold themselves aloof, to respect the “will of the people” (people who, they know good and well, are mainly crossover Democrats intent on mischief; trolls; and misinformed primary voters),and to stay above the fray—rather than condemn Trump and work to ensure that someone else is nominated—are conveniently those “leaders” who are not up for re-election this year. McConnell, Cornyn, and others hope that the furor will die down by the time their next elections come around, while they willingly leaving their comrades (those in the Senate who are up for re-election this year, and ALL the Republicans in the House, to say nothing of all the down-ticket races) to die in the field.

These are the disgraceful actions of shameless, self-serving cowards, not leaders. Furthermore, they have the gall to cloak their cowardice under the guise of “teamwork.” Falling in line behind the presumptive nominee and calling for party unity—which they know is an absolute sham, given the reckless, acrimonious, and false rhetoric Trump has been spewing for the past year—is merely their calculated least-bad method of self-preservation. It is now clear that all they have been doing, in their non-endorsements, half-hearted endorsements, reversals of endorsements, and flaccid pretenses of disagreement with Trump’s tone, is—in the absence of any adherence to actual principles or ideals—merely an attempt to gauge which course is likely to offend the least number of voters. Failing that, they hope they can ride out the stormy winds of conflict and find safe harbor when the controversy dies down. What they don’t realize is that this conflict is not going away; we will not forget the baseness of their cowardice and betrayal.

This is the self-evident ultimatum that is implicitly issued by all free-thinking people, whatever their particular ideology, to the self-styled and unfortunately elected “leaders” of the Republican Party currently operating in standard wishy-washy mode: Disavow Trump now and work publicly to ensure he is not the Party’s nominee, or else the Republican Party will collapse, and you will have no place in the new party that emerges from its ashes. The bright spotlight of truth and accountability is a wonderful antiseptic to the rot of systemic corruption, and those golden parachutes and cushy lobbying jobs that you look forward to enjoying when all this is over may not end up providing the soft landing you’ve been planning for.

Lack of Leadership on the Right was last modified: June 27th, 2016 by Guest Contributor Jon Garber

Jon Garber is the proud father of seven conservative voters and grandfather of six (so far). A lifelong political activist, he served as Scoutmaster alongside his five sons, all of whom are Eagle Scouts. He is happily married to Olga Garber, a true grassroots heroine.

Excellent, well-written article. The GOP dies with Trump, as does our chance to restore freedom for ourselves and our children.

But we people of principle will press on so that future generations may carry the torch.

Yet, we have three weeks to decide NOT to commit party suicide.

While you guys write all the #$%^ about Trump DID YOU F>>ING NOTICE that Paul Ryan gave Obama a budget of his dreams?

Did you notice that the GOPe supports every open border initiative that the Democrats put forward?

Do you idiots know that immigration is going to swamp you morons at the polls? Virginia is lost as a reliable conservative state now. And this is now everywhere… The country is soon to be California everywhere because the GOPe has helped Democrats import voters for thirty years.

Yes Trump is going to lose… so would Yeb! when the Democrats get out their legions of voters..

Go clutch your Constitution because soon it will be meaningless. The Democrats will have the votes to pass whatever they f..ing want.

No argument here that the establishment is not conservative. Problem is Trump is even less conservative than they are. He is scamming all his loyal supporters who still follow their idol even when he has already reneged on all his promises to them.

* Yawn * Another shrill #NeverTrump diatribe on TBE? You guys really need to get some help for your TDS; it’s effecting your whole outlook.

Trump IS the Republican nominee – his having received MORE primary votes than anybody ever; you’d have to be a special kind of delusional fool to think otherwise.

It’s going to be all right: Trump is going to win in a landslide; he’s going to put #AmericaFirst and help #MakeAmericaGreatAgain.

Who better to blow up the whole rancid structure in Washington than Donald J. Trump?

You mean the financier of DC corruption?

Who better to blow the whole rancid structure in Washington than Donakd J. trump?

Is that you, Eric Erickson?

Eric is not a relative of yours? 😉

I have often wondered what happened to my relatives. Could Eric be the real life Hannable? Just think of the lead Donald would have if the pledgers honored their pledges, who do they think they are Ralph Buona?