Language-modification as a Political Strategy

One of the things clever politicians do is modify the meaning of a common term. Listeners think he is talking about a familiar concept, while he really is talking about something else entirely. Take the word investment. Most voters think they know what that is. Webster defines it as –

“the outlay of money usually for income or profit : a capital outlay…”

In some cases, an individual invests in a small business or enterprise: in cash, directly from personal funds; or via an expenditure of his time. In other cases, companies accumulate earnings and plow them back into the business in order to expand or improve it. And, of course, both individuals and organizations commonly invest by purchasing shares of ownership in companies, or bonds (that are actually the equivalent of business-loans), through formal securities exchanges.

All of these investments are entirely volitional. They are not compelled in any way. Businesses don’t dun their employees or their customers to finance the company’s expansion or to prop up the company when it’s short of cash. Investment is a voluntary act at the very heart of capitalism. The smart money goes to businesses that can grow and earn dividends for their shareholders. Fools or ideologues invest in failing businesses.

Some devious politicians have now modified the term investment to mean something different from its classical meaning. In modern political parlance, “investment” now means putting taxpayer-funds into infrastructure improvements (e.g., highways, bridges, schools, local police forces, etc.), or into marginal businesses that will advance a political agenda of certain politicians. Often these lack the market viability that would attract conventional investment. Establishing and propping up “alternative energy” businesses are prime exhibits of this genre. Most of them eventually crash.

Voters are naturally confused when they hear politicians declaiming about investment. The term evokes thoughts of private businesses growing and expanding, making money for their shareholders, and paying taxes. But the times are a-changin’. Government’s “wise men” have poured billions in public monies down rat-holes. Taxpayers will see little of it again. Yet politicians charge ever-onward, preaching the importance of investment – confident that most taxpayers won’t catch on.

Fair share is another term that has much currency (so to speak) in contemporary politics. Politicians use it to confuse voters who have no real clue about what taxes are paid by people of various income-levels. Demanding that higher income individuals pay their “fair share” in taxes has been part of the Democrat Party’s shtick for over a century. In earlier days it was called “Soak the Rich.” It shows no signs of disappearing from the liberal playbook. Wags have suggested that even a 100% tax-rate wouldn’t satisfy committed lefties.

Democrats were in full cry during the Obama-regime about “millionaires and billionaires” not paying their fair share. What that share should be, in order to be fair, is rarely defined, but pols assured us that “the rich” have lower tax rates than the rest of us. Zillionaire Warren Buffet became Obama’s poster-boy by claiming that his secretary paid taxes at a higher rate than he did. This was by way of Mr. Buffet asking the president to raise the taxes of high-income people.

Why (one might ask) didn’t Mr. Buffet simply pony up the extra tax he thought he should be paying? (There is provision in the law for individuals to make such “gifts” to the government.) Obviously seeking to ingratiate himself with high-tax liberals, Mr. Buffet wanted others to pay more taxes, too – strictly in the interest of “fairness,” of course. Mr. Obama immediately jumped on this as vindication of his call for higher taxes on everyone with an income exceeding $200,000 a year ($250,000 for couples). But the attempt gained no political traction, since most of the goodly senators and representatives have incomes well beyond Obama’s “fair share” threshold. 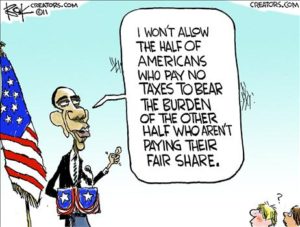 Democrats call these people “millionaires and billionaires,” although many possess wealth at nowhere near these levels. Economists point out that many people with these higher incomes are owners of small businesses who channel all their business expenses and income through their personal tax-returns. This makes an individual’s income look high, but it’s a false picture. Much of that income is offset by expenses of the businesses.

The Buffet Tax-request was really a diversion from the core questions of what constitutes “fair” taxation at various income levels, and how much tax-revenue can be produced by those higher taxes. These questions receive very little media attention, although lately there has been some discussion of what share of total national income is earned by people at various levels, and what share of total taxes they pay.

To clarify these matters, I furnish a table (below, taken from official government data) which quantifies shares of taxes paid and income earned in the USA, by “quintile” – i.e., five slices, each representing 20% of all households, ordered by income. Thus, Quintile 1 contains the 20% of households with lowest incomes, and Quintile 5 contains the 20% of households with highest incomes. The table shows that the highest quintile pays 86% of all income taxes. The lowest two quintiles pay no taxes, but actually receive government payments amounting to 3.3% of all taxes paid. The top 20% of households earn 56% of all income, but pay 86% of all tax, producing a tax/income ratio of 1.54.

In case some readers have the impression that high-income earners have been getting an easy ride for the last 40 years – as many Democrats insist – it’s worth looking at a similar chart from 1979. (See below.) Obviously the tax-burden was spread out more evenly in 1979 than it is now. No quintile had a negative ratio then, as the two lowest quintiles have now. In 1979, the top quintile got a much easier ride, while the four lowest quintiles paid more in taxes than now. This belies the argument that the tax-rates have gotten tilted in favor of “the rich” in recent years. It’s gone the other way now.

Compassion is another term that had its meaning changed by politicians over recent decades. Compassion has always been an admirable personal trait. Webster calls it “…a sympathetic consciousness of others’ distress together with a desire to alleviate it.”

This definition still applies. The politically inspired change has been in the placement of the impulse. Originally, it was an impulse felt and acted upon at the personal level. Now, however, “compassion” is cited by politicians as a call for action by others – primarily, by taxpayers to finance expenditures of public monies in causes that those politicians believe worthy of subsidy.

The whole concept has now been transmogrified into a virtual compassion industry built on compelling people who may feel no particular personal motivation to pay up, so an elite group can favor “worthy” causes, groups and individuals with public largess. It strains credulity to imagine that such recipients all suffer “distress,” within the original meaning of compassion (above). Politicians wear their “compassion” as a badge of honor, but it has become the scam of scams in the modern age.

Politicians still tell outright lies – sometimes even whoppers – but the language-mod strategy is more subtle. Voters need to beware of it. 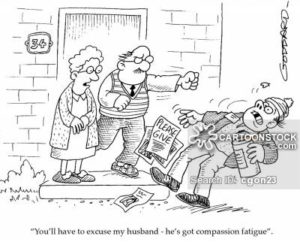 ‘You’ll have to excuse my husband – he’s got compassion fatigue.’

Language-modification as a Political Strategy was last modified: June 28th, 2018 by Woody Zimmerman

You constructed an elegant straw man argument. The argument for having top wage earners pay more taxes is rooted in the percentage of their income that goes to tax, not in the nominal amounts of taxes that they pay. No intelligent person will deny that top earners contribute a disproportionately large percentage of total income tax revenues. The complaint that low income taxpayers have is that they feel the taxes more because they don’t have as much money to spend on food, clothing, shelter, energy, education and healthcare, which top earners typically have no problem funding. When you make $35,000/yr and pay $6,000 in net federal and state taxes (17%) it restricts you a lot more than $100,000 in taxes does to someone making $1,000,000/yr ($10%)

The incentive is to work to be the millionaire. If you aren’t happy with $35k per year, improve yourself.

That is definitely not a resolution. Imperious to tell anyone (1) what they need to do to be happy (maybe they already are happy…I know many”poor” people who are happier than ‘millionaires” because their lives are simpler); (2) how much income they should make; (3) that they need to “improve” themselves so they can be millionaires

Your $35,000 example would put that income in the second quintile, a quintile that (as I understand this post) pays no taxes but, rather, receives money back from the government (see the body of the posted column) Here are the incomes by quintile – https://www.taxpolicycenter.org/statistics/household-income-quintiles

State income taxes vary by state so a single comparison is impossible. In Tennessee, for example, there is no income tax.

Yes, $35K with deductions and exemptions can yield a net taxable income of $29K. (The $6K tax figure is offered simply for illustration, not necessarily the actual figure). Regardless of the tax — whether it’s $10K, 8, 6, 4 or $2K: the cost of food, clothing, shelter, energy, education, transportation and healthcare for a person making $35K FAGI is a much larger percentage of his/her income than it is for someone taking home $900K. That is their main concern in trying to keep their head above water

So we will raise taxe…er….investments to pay for welfar…er….the public good….and help illegal imm….uh I mean new Americans.

The changing of the definition of words is the foundation of political correctness. If a word has two or more opposite or obtuse meanings, it is perfect for confusing people who understand the obvious definition but don’t understand that the word does not have that meaning. You almost have to ask for a definition and even then that doesn’t guarantee understanding if the intent is misunderstanding. That is one of the reasons why discussions with the left are so frustrating and fraught with danger. “It all depends on what the meaning of is, is” —- thank you Bill Clinton.