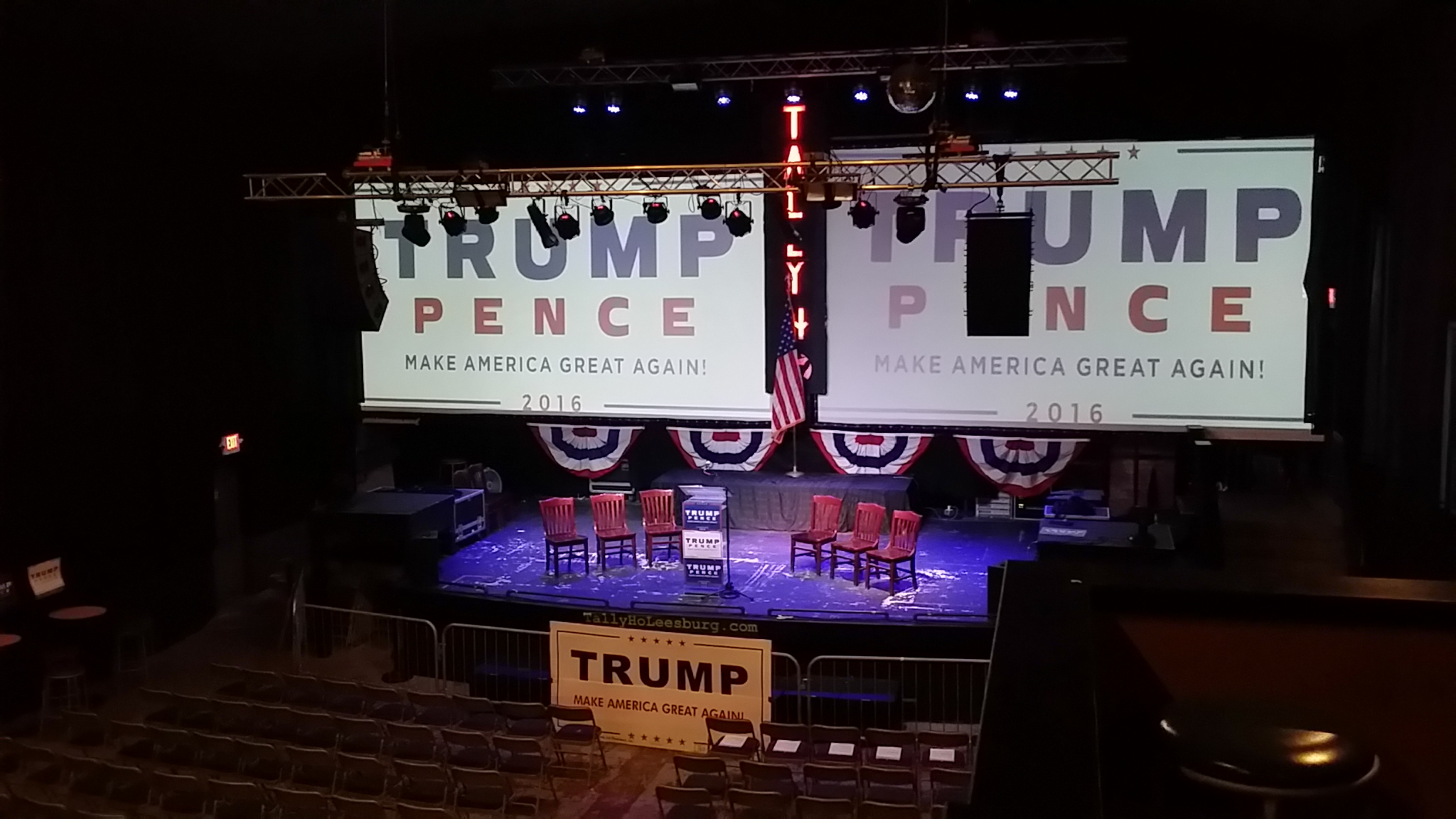 Lara Trump, the wife of Eric Trump, appeared at an event in Loudoun County on Sunday at the Tally-Ho theater in Leesburg.  The event was hosted by a combination of the Women for Trump, Moms 4 Trump, and The National Diversity Coalition for Trump organizations.  Over 200 people attended the event on short notice to support Donald Trump for President and to listen to the speakers and guests.

Algonkian District Supervisor, Suzanne Volpe, started off the event by warning attendees about the dangers for our children’s future and our safety if Hillary Clinton is elected.  She reminded everyone that the push for government run healthcare started with Hillary Clinton and “HillaryCare” back in 1993.

Sheree Saber spoke next.  As the leader of the Moms 4 Trump organization, she made a specific appeal to women and moms to support Trump. She also urged the audience to take advantage of all the opportunities to volunteer for the campaign.  As a woman, Saber said she would love to see a woman President, but “just not this woman.”  As someone with a background in fashion, Saber said, “the first woman in the White House should carry the finest bags, but definitely not questionable baggage.”

Next up was Lynne Patton, Vice President of the Eric Trump Foundation. She spoke about her experience with the Trump family and all the philanthropic things they do, both in public and behind the scenes.  As an African American, she refuted the charges of bigotry leveled at Trump, and spoke about the failure of the Obama Administration and the Democrats to provide any economic support for minorities and inner city families. 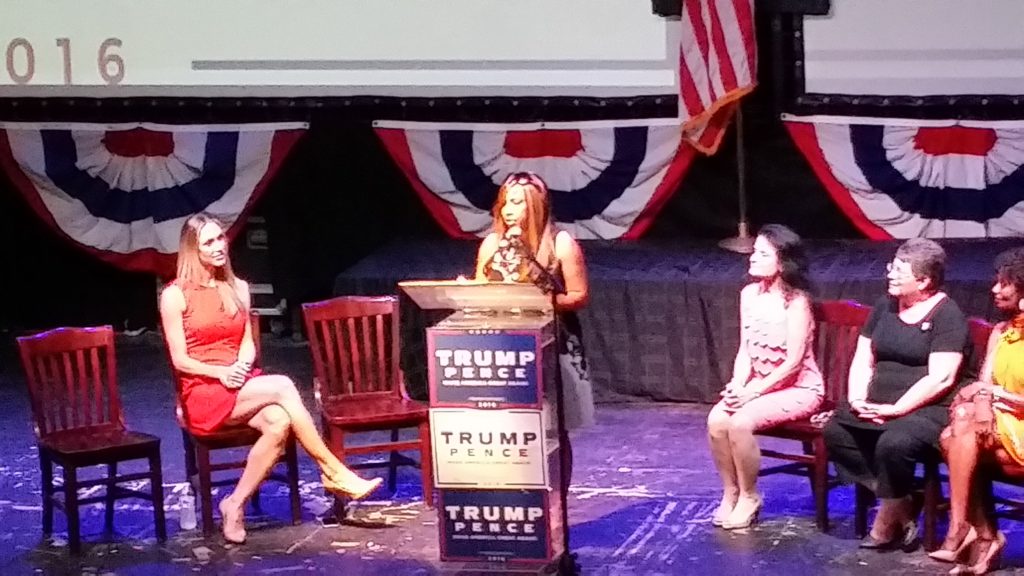 The last speaker was Lara Trump.  She spoke about her what it’s like to be a member of the Trump family and her experiences with the private side of Donald Trump.  She spoke about Trump’s experience and success as a businessman, relating the story about how Trump took over the construction of a skating rink in New York City, and completed the project ahead of schedule and millions under budget.  She spoke about the need to bring that kind of business acumen to Washington, DC. 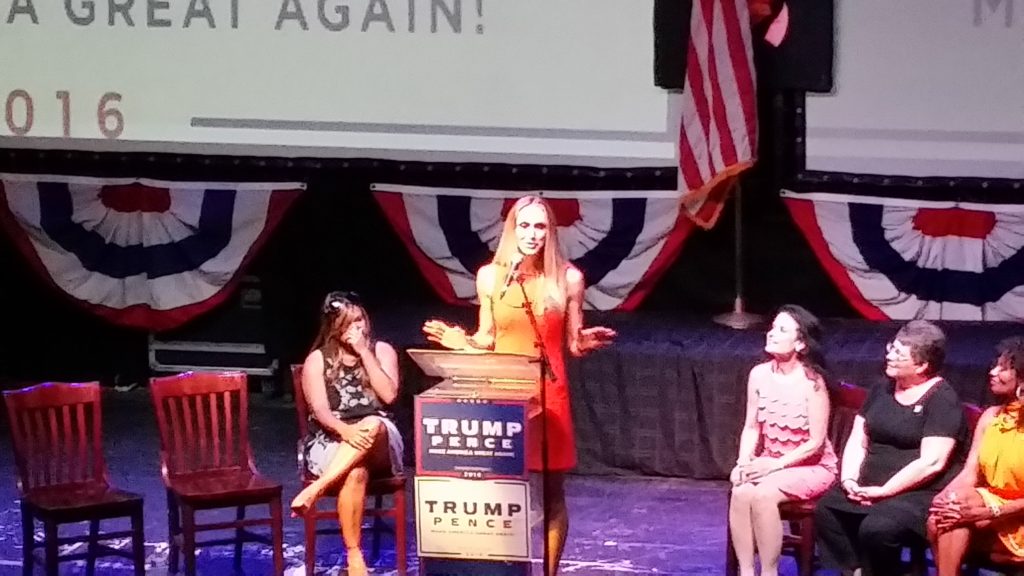 Before the event started, I was given the privilege of conducting brief interviews with both Lara Trump and Lynne Patton.  First I had the opportunity to speak with Lynne Patton:

After that I had a brief chance to speak with Lara Trump:

All in all it was a successful rally, especially given how quickly it was put together.  This event, combined with the Mike Pence rally in Purcelville yesterday, shows a serious effort by the Trump campaign to compete in Virginia, a state they desperately need to win in November.  Inside sources say the Trump campaign is committed to spending a significant amount of money to win Virginia, and the repeated attention the state has seen from the campaign and its surrogates provides proof of that commitment.

Thank you to Supervisor Volpe for not just talking about voting for Donald Trump but demonstrating leadership in getting others involved. Also a shout to the many volunteers who helped from check- in to security for the event.

Also a shout out to the channel 7 reporter for her fair and balanced coverage of the event.

Having had the opportunity earlier on Sunday to meet with both Lara Trump and Lynne Patton, they both are assets to the campaign.

Jo Ann Chase has done a extraordinary job since last year speaking,interviewing, and writing articles for the many Hispanic news outlets and print media for example (Univision, Telemundo, etc)on behalf of the Trump campaign Hispanic outreach. I was at a event standing next to Jo Ann where Donald Trump autographed her article about “The Wall”on the front page of the El Tiempo Latino newspaper. Mr Trump thanked her for writing the article.

Sheree Saber has also done great work in holding organized events in private and public venues reaching out to moms and the importance of them getting involved with the election as part of Moms4Trump.

Howie Lind also has been doing outstanding outreach to the veteran and retired law enforcement community as part of Veterans/Retired Law enforcement out reach to get them involved with becoming election officers and poll watchers.

All three of these Trump campaign Affinity Groups NDC,Moms4Trumps,and Veterans for Trumps are having great success in getting folks involved on Election Day and getting out the vote.

Nice job, Mick! Enjoyed the interviews. Lara is a great spokesman for her father in law.

Thank you for the in-depth coverage of this event. My wife would love to know how to join the Moms 4 Trump group in Virginia!

You can reach Sheree Saber at [email protected]

Why did you fail to mention JoAnn Chase who coordinated the entire event as the Va a Director for the NDC and spoke at the event? She was the reason the VIP’s were invited?

Also noted your purposely placed the order in reverse of the various groups speaking. First, Jo Ann Chase coordinator of the event for the Nat Diversity Council, Sheree Saber for Moms4Trump, and Supervisor Susanne Volpe who,praised Ms Chase for her work putting the event together.

Why the diss and selective reporting of the event Mick?