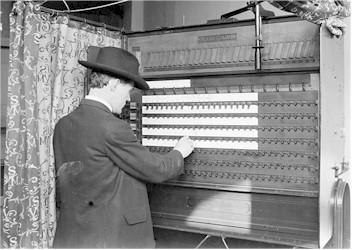 Late-reporting Precincts, Then and Now

Back in the day when Mayor Richard Daley exercised complete control over Chicago, his reach extended even to the state level and sometimes to the entire nation. Boss Daley became famous for swinging elections his way by engineering the production, at a late election-night hour, of just enough votes from what became known as Daley’s “late-reporting precincts.” His highest-profile achievement in that vein occurred in 1960, when those precincts submitted just enough late votes to push Democrat John Fitzgerald Kennedy over the top in Illinois, and thus into the presidency.

So obvious was the chicanery in Illinois that President Eisenhower urged Republican candidate Richard Nixon to protest the election and call for recounts in Illinois, West Virginia, and several other states. But Nixon declined to do so, saying that it would be “bad for the country.” (It was a different time.)

The late-votes technique has been used successfully at various times to push local and statewide candidates over the top. In 2008 a close contest for one of Minnesota’s U. S. Senate seats looked like a win for incumbent Senator Norm Coleman, who held a lead of 215 votes after the count was completed on November 18th. But the close vote triggered a mandatory recount, which ultimately produced a lead of 225 votes for challenger Al Franken. Coleman charged that ex-convicts, who were ineligible to vote, had provided the margin for Franken’s election, but the courts did not accept those claims. After 8 months of recounts, court cases and appeals, Franken was finally declared the winner by 312 votes.

The most notable attempt to turn an election via late reports and recounts occurred after the 2000 presidential election. On election night, news organs first called the election for Mr. Gore, but then reversed when it looked like George W. Bush had carried enough states to win the Electoral College vote. Al Gore had actually conceded, via a telephone call to Mr. Bush, when Mr. Gore’s campaign manager, William Daley – son of the aforementioned mayor – learned that Mr. Bush’s margin in Florida was 537 votes out of some 6 million cast. This prompted Mr. Gore to rescind his concession and request a recount in Florida. Winning that state would have given the presidency to Mr. Gore.

A recount in all 66 of Florida’s counties, completed on November 10th, reduced Mr. Bush’s lead to 327 votes. Subsequently, at Mr. Daley’s urging, the Gore campaign requested “selective recounts” in just four Florida counties – Miami-Dade, Broward, Palm Beach and Volusia – which leaned heavily Democrat. Having learned how to engineer election results at his father’s knee, Mr. Daley was confident that those recounts could easily overcome Mr. Bush’s small lead and give Mr. Gore the presidency.

But Mr. Daley forgot – or else his pop failed to teach him – that election shenanigans have to take place at night, not in broad daylight. While court challenges and appeals continued, the selective recounting – shown on TV videos to be somewhat chaotic – went on in the four counties. On one particular morning, during the Florida-recount, a close relative of mine who is also an attorney telephoned me to report that TV news clips were showing a recount-room where some ballots were scattered on the floor, people were walking all over the place, and counters were riffling packs of card-ballots to dislodge the notorious hanging chads. “This is evidence!” she was practically shouting. “You can’t treat evidence that way!”

Finally, on November 22nd, the so-called Brooks Brothers Riot in Miami stopped the recount in Miami-Dade County. A gang of well-dressed protestors raised so much hell in the hallway outside the recount-room that the recount-team abandoned the effort. The Florida Supreme Court had already ruled that the selective recounts could continue, but the U. S. Supreme Court finally ruled on December 12th that all recounts must cease, and that the Florida Secretary’s certification of Mr. Bush as the Florida winner should stand. This gave Mr. Bush the presidency by an Electoral College vote of 271-266 (one “faithless elector” from the District of Columbia having abstained).

In the aftermath of Florida’s battle of the “hanging chads” – caused by faulty punched-card ballots – many states rushed to do away with card or paper ballots entirely, and changed over to computerized voting. Unfortunately this opened a whole new field for fraud, as election officials had evidently failed to consider that paper- or card-ballots are empirical “artifacts” which can be recounted, while computerized voting produces only an internal computer file which can be modified or even deleted – accidentally or deliberately. Over the last 20 years, billions have been spent, nationwide – first on wholesale conversions to computerized voting, and then on reconversions to paper ballots.

What relevance does this brief history of voting chicanery offer for the election of 2020? Certainly it warns us to be ready for anything. But this is true of any election. The challenge of handling and storing voted ballots also remains the same. The greatest care must be taken to ensure their security.

At any voting place, ballots should be counted by machine as soon as they are voted. Thereafter, they should be stored in sealed cartons and secured for the eventuality of a recount. No single individual, anywhere, should handle or examine voted ballots. Teams consisting of officials of both parties should participate in any ballot handling. (My pop used to call this “keeping the honest people honest.”)

All states and counties already have established procedures for issuing and handling “absentee ballots.” These have always been furnished, on request, to eligible voters who verify that they cannot attend their standard voting place on Election Day. Small procedural differences in these matters exist among counties and states, but everywhere the voter must verify his identity and must follow absentee-voting directions scrupulously. Absentee ballots not received by a specified date are not counted. A political issue is sometimes made of the rejection of late ballots, but the standards are well known and are not new.

Absentee ballots should also be counted by machine, without being examined by any official. However, no data seems to exist on how many election offices follow this obvious security measure. It could be a weak point in the vote-counting procedures of some offices. Bundles of absentee ballots submitted by an individual should also be rejected. Called “ballot harvesting,” this process is an obvious opportunity for election fraud. It’s illegal in many states, but not in all. It should be prohibited by federal statute, but today’s political alignment makes that unlikely.

Today’s riskiest situation is the new construct of “mail-in” voting. This fall, all (or most) voters in 10 states and Washington, DC will receive ballots by mail, with no verification of whether addressees still live at the address on file, or are even alive. Voters in 33 additional states will be able to request absentee ballots due to COVID-19 concerns, without giving any other excuse. Most or all voters in some states will also receive mail ballot applications from their election officials, whereby they can apply for absentee ballots in the conventional way. Just five states – Indiana, Louisiana, Mississippi, Tennessee, and Texas – will require most voters to provide an excuse beyond COVID-19 concerns to vote via absentee ballot.

The states sending vote-by-mail ballots to all voters on their rolls are Washington, Montana, Hawaii, California, Oregon, Nevada, Utah, Colorado, New Jersey, and Vermont; also Washington, DC. All these, except Montana and Utah, were carried by Hillary Clinton in 2016. Since the states Mrs. Clinton carried will probably stay in the Democrat column, their much ballyhooed use of statewide vote-by-mail is not likely to perturb the election, unless it somehow gives Republicans the upper hand. Mrs. Clinton carried Nevada by only 2.4%, Minnesota by 1.5%, and New Hampshire by 0.3%. With all those mail-in ballots flying around, anything can happen. Mr. Trump might spring some surprises in those states.

Nevertheless, drastic increases in absentee voting, even under established protocols, could produce serious disruptions. Offices accustomed to handling perhaps hundreds of absentee ballots could be overwhelmed if those numbers should increase to thousands or tens of thousands. Lacking the staff and time needed to process so many absentee ballots, offices might take shortcuts that increase the likelihood of errors or outright fraud. No election officials want to admit that this could happen because they don’t want to lose their jobs. This leaves voters waiting for the other shoe to drop after Election Day. Drawing the counting of ballots out for days, or even weeks, only increases the likelihood of fraud.

Right now, Democrats’ more radical elements are in a rush to change, upset or eliminate many standards and established features of American life and culture. Some activists also want to radically modify or even do away with secure voting procedures, to ensure election of their favored candidates. This is a very great danger to the health of our Republic. To retain the trust of the People, voting must not only be honest, but must be seen to be honest.

In the current climate of urban unrest and violence, citizens being denied entry to voting places is possible. Indeed, the prospect of armed gangs breaking into voting places, wrecking the counting devices and destroying ballot-artifacts is not far-fetched. Let’s hope that Mr. Trump and his team are making plans to deal with election-disruptions, should they occur.

We live in dangerous times. This is no time for complacency. Forewarned is forearmed.

Late-reporting Precincts, Then and Now was last modified: October 11th, 2020 by Woody Zimmerman