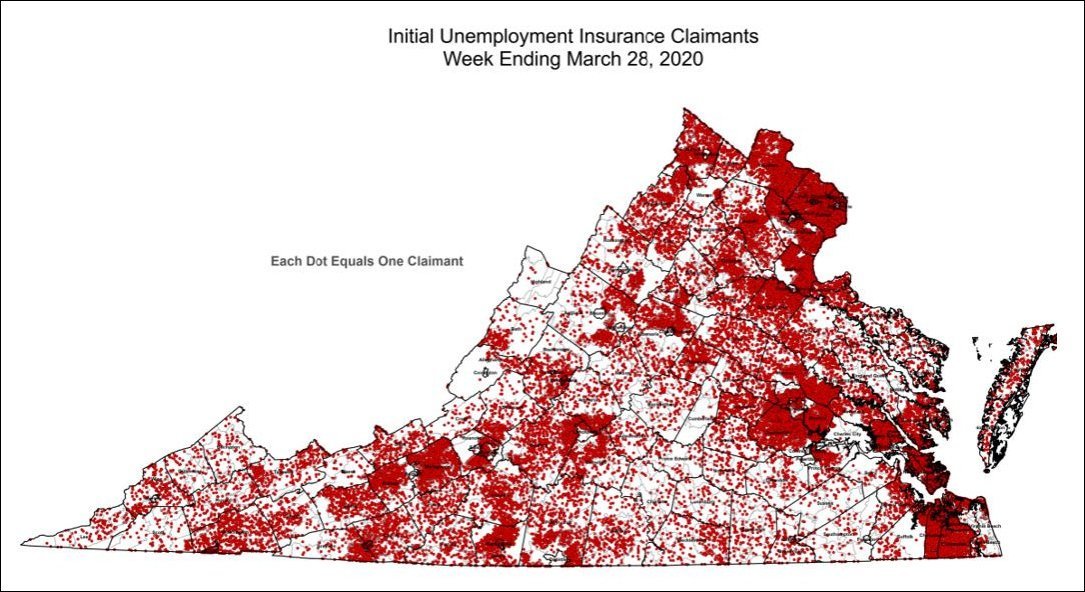 The latest unemployment claims are in, and they’re brutal — more than twice the level in Virginia (and across the country) of last week, which was, by far, the worst week in the history of the United States. For the week ending March 28, the number of seasonably unadjusted initial claims was 112,497 — up from 46,277 the previous week.

The map from the Virginia Employment Commission website above shows the geographic distribution of unemployment claims. In raw numbers, the layoffs look worse in Virginia’s major metropolitan regions — Northern Virginia, Richmond, and Hampton Roads. But it’s no surprise that the number of job losses will be highest in the most populous parts of the state. What the maps do not show is the job losses expressed as a percentage of the workforce. In that light, the jobs claims in the western part of Virginia (basically Lynchburg west) look dreadful.

The Federal Reserve Bank of Richmond has been surveying employers in the Fifth Federal Reserve district, which includes Virginia, since late February. The questionnaires asked how the spread of COVID-19 has impacted businesses, and how the businesses expected the virus to impact operations. Both questions show a marked deterioration in expectations between Feb. 27 and March 18.

Again, no surprise. The mounting number of cases, hospitalizations, and deaths has driven COVID-19 to the front of everyone’s consciousness in a way that nothing has since 9/11. Unlike 9/11, which had horrific but localized effects, the coronavirus potentially impacts everyone. If the virus itself doesn’t impact everyone, the government-mandated shutdown orders certainly will.

What the numbers don’t show. The flexibility of our economic system is one of this nation’s great strengths. (It’s not as flexible as it could be, but that’s a different subject.) These jobless numbers don’t reflect the creation of thousands of jobs by Amazon, grocery stores, food delivery services, and other businesses as they respond to the new shelter-in-place paradigm. The number of new hires probably pales in comparison to the number of layoffs, but we can be grateful that businesses adapt so rapidly.

James Bacon is the publisher of baconsrebellion.com where they have excellent coverage of the coronavirus.