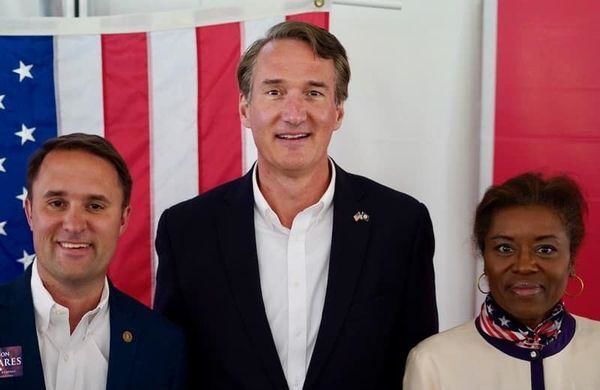 In a recent Mary Washington University poll all three Republicans running for statewide office are leading over their Democrat opponents.

>>>Regional differences in candidate preference appear to be less distinct in vote-rich Northern Virginia this cycle. Forty-eight percent of likely voters favored McAuliffe, while Youngkin had the support of 45 percent – far from the double-digit advantage Democrats usually enjoy in the Commonwealth’s most populous region.

In the western part of Virginia, a traditionally Republican region, Youngkin is strongly supported: 62 percent of likely voters in that largely rural region favored him, as compared to 27 percent favoring McAuliffe.<<<

See the above link for details on the poll.

I clicked the link and read the article. What I found out was that “Liberation Party candidate Princess Blanding” is Black. I wondered why I have heard so little about her and have never seen a photo of her in the articles I’ve read for Governor. Democrat-run media don’t want the black nationalists voting for her and siphoning votes from the dreadful Terry McAuliffe who is looking more and more like Mr. Burns from the Simpsons as he ages, which would actually be an improvement to McAuliffe’s personality.

Before, we had Democrat suppression polls that overstated Democrats’ support early in the election cycle to destroy the morale of their opponents and then, as the election day drew near, the polls would narrow and Democrats would sound the alarm bells to scare their people to show up an vote. Now, I see a different calculus. Democrats need to push out polls that align with what they plan to deliver on election day via fraud. Therefore, it is important for Republicans to run many polls up to election day so that, when there is a significant disparity after the election, we can find the most likely places where fraud occurred.

Actually not the latest polls. There were four polls from after these (Emerson, VCU, PPP, and KAC) and all four show a solid lead for the Dem ticket. VCU shows McAuliffe up by 9.

The late votes all for the democrat will suddenly appear like 2020 and fix that!

Yes, it does. Thanks for admitting it.

sure. I try to be honest