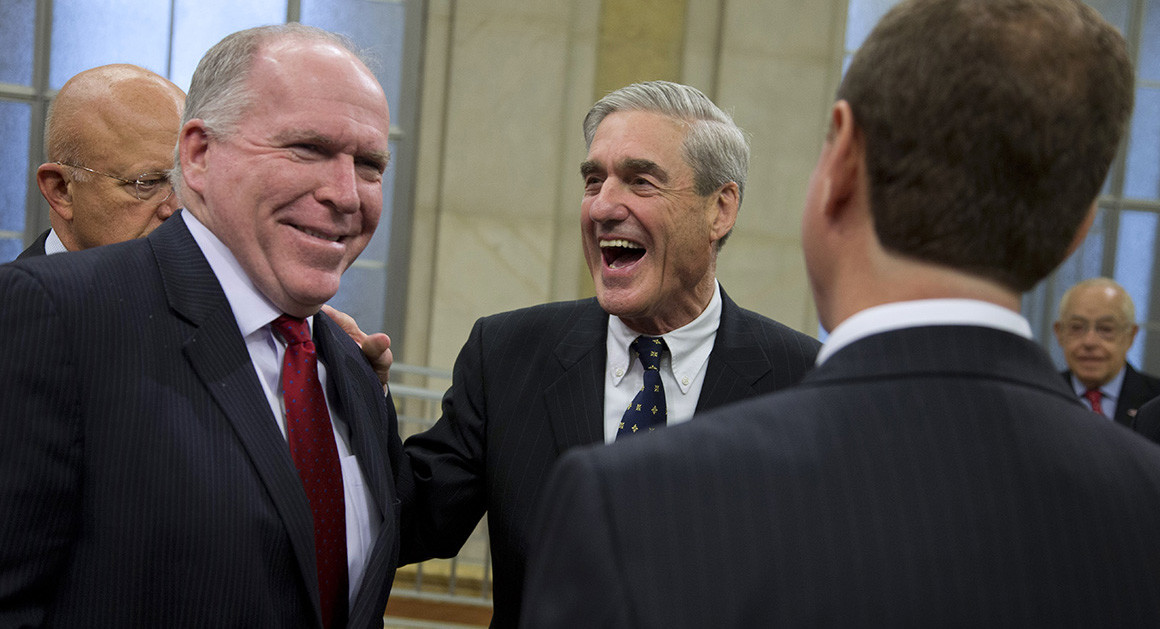 â€œJustice is turned back, and righteousness stands far away, for truth has tumbled…â€

Now that Paul Manafort, President Trumpâ€™s former campaign manager for less than four months, has been sentenced in both his Virginia and Washington, D.C. trials for tax fraud and other assorted crimes prior to his work for the campaign, Washingtonâ€™s pundits are opining that the deck is now cleared for Special Counsel (and former FBI Director from 2001-2013) Robert Mueller to issue a final report on his two year GI exam of the Trump campaign and administration.

There is no need to re-plow the vast acreage of evidence already in the public domain based on Congressional testimony, court documents, transcripts, public statements, FOIA revelations, email revelations, and the slow-motion drip from the Department of Justice and the FBI. For those of us who have written extensively on this subject since the summer of 2016, nothing has changed. The facts that were obvious more than two years ago have only been confirmed and expanded.

The upshot of the two year exercise of turning the nation inside out is that there is simply no evidence of Russian collusion or any illegal or unusual connections between the Trump campaign or subsequent administration and the Russian government, at any level, at any time.

For two years there has never even been a coherent narrative presented on how, or why, a conspiracy or â€œcollusionâ€ could have manifested itself in any event, or what purposes it would have served.

It has always been a fake investigation based on what was a pseudo â€œintelligence dossierâ€ whose history, funding and promotion is a complex scandal in its own right. But the dossier from its inception was provably false, a fact even its â€œinvestigatorâ€ and author, Christopher Steele, was forced to admit in an English court deposition. Much of it came from what were unverifiable second and third hand sources, at best, and still other portions of it were literally lifted from random stories and anonymous rants off the internet.

Even though this was already known in both the DOJ and the FBI, the Russian hoax was pushed along by people who themselves are as fake as a three dollar bill. This includes the corrupted and ineffectual duo of Robert Mueller and James Comey, Mr. Muellerâ€™s friend and successor as FBI Director. Between the two men, they left an already rickety FBI irrevocably broken and beyond repair in its present form; while the bizarre former CIA Director under President Obama, John Brennan (who inexplicitly was confirmed by the Senate despite having voted for the Communist Party USAâ€™s presidential candidate in 1976), delivered yet another body blow to an agency revolving around its own dysfunction and successive intelligence failures.

The real story that we do have evidence for is a still unfolding scandal that should shock even the most jaded observers; the overwhelming evidence is that at the highest reaches of the DOJ, FBI and the CIA, and by extension the White House, there was a determined effort to stop Donald J. Trump from being elected, and once elected, to remove him from office through a soft coup.

In addition, the Russia hoax was the critical distraction used to hide the real crimes that were committed by those same individuals and by then presidential candidate, Hillary Clinton.

Itâ€™s a full palette of already proven, public facts; blatant violations of the Espionage Act, coordination between the investigated and investigators, destruction of physical evidence, falsifying FISA court referrals, unmasking U.S. citizens in intelligence documents, warrantless eavesdropping on private citizens, and providing classified communications to the press â€“ to name but a few.

But the real story of this appalling mess and the critical danger to the Republic wonâ€™t be told in the Mueller investigation report. This ongoing spectacle merely underscores the use of the law as a weapon to silence or destroy enemies and punish social and political views â€“ and to enrich a legal system that is now simply a big business model.

The transformation of the â€œlawâ€ away from a process that delivers impartial justice, into a mammoth and very lucrative system that provides too much law and not much justice, has been growing over the course of the last half century. Itâ€™s not a new phenomenon, but it is a cash cow on steroids, and proving itself the political bludgeon of choice.

The â€œSpecial Counselâ€ law specifically in its various iterations, demonstrates this evolution as it becomes commonly used. It amounts to the extra-constitutional dereliction of duty by both the DOJ and Congress, as well as the courts. The very institutions the public must rely on to create law and deliver justice wonâ€™t, so they employ a process that uses a political razor blade, cutting up everything it touches. (For the record, I have written in opposition to renewing this statute by Congress, and have opposed every SC appointment, including that of Ken Starr.)

Law as a business model has erected a two-tier system where the â€œlegal complexâ€ of courts, attorneys, government and politicians wins even if they lose. Their money is unlimited, and the system continuously expands to accommodate an ever increasing supply of fodder for the conveyor belt of the â€œlaw.â€Â  Justice is no longer a fruit of impartiality, righteousness or truth, but a bartered commodity.

Regular citizens who have been caught up in the modern legal system or the administrative schemes of the government, soon discover a cold fact; fairness, objectivity, and truth are rarely the yardsticks applied to legal matters. Lies are too often the currency in legal transactions inside the courtroom; the time-cost of labor can rarely afford the truth.

The use of the â€œlawâ€ to deal with adversarial political and policy positions is so effective that its use has leached into the vast administrative state, to whom the Congress has turned over virtually unchecked power.

It is a settled practice as witnessed in a wide array of confiscatory environmental and land use processes where the huge cost of defense limits opposition. This same formula has worked across the regulatory agencies, such as HUD and HHS, and even the IRS, where conservative groups were denied otherwise lawful tax status at the whim of unelected officials. Even the FDIC, an independent agency, was caught red-handed using its immense power to selectively force banks to drop legal businesses from access to financial services.

It is a fearful thing that a great Republic that once celebrated the righteousness of law and justice as a product of a virtuous society, would forget its own founding, and how much God has to say about that justice in Scripture. There is an unbreakable relationship between truth and justice; one doesnâ€™t exist without the other.

â€œJustice is turned back, and righteousness stands far away; for truth has tumbled in the public squares, and uprightness cannot enter. Truth is lacking, and he who departs from evil makes himself a prey. The Lord saw it, and it displeased him that there was no justice.â€ Isaiah 59:14-15