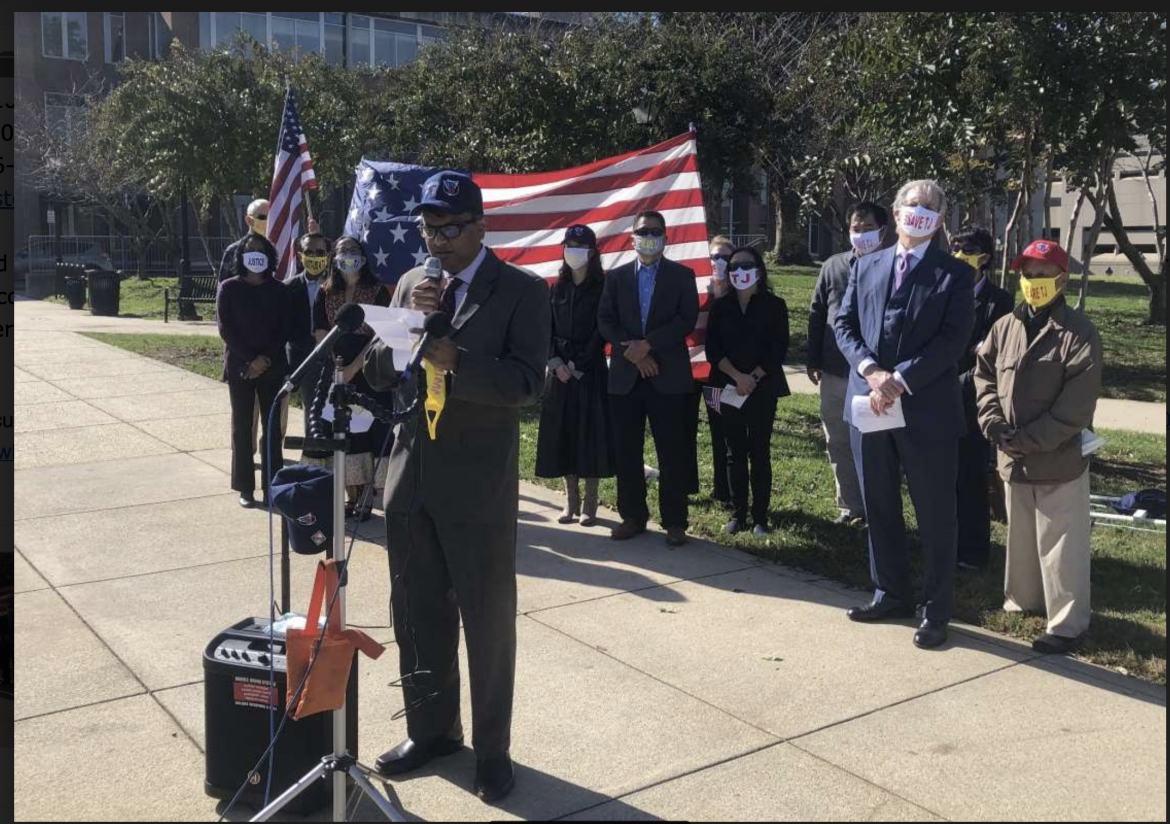 Some of the plaintiffs in the TJHSST lawsuit against FCPS

On November 4, 2020, 17 plaintiffs filed a complaint in Fairfax County Circuit Court against the Fairfax County School Board on behalf of their Middle School children arguing that recent changes to the criteria for admission to the Thomas Jefferson High School For Science And Technology in Alexandria, Virginia should be struck down as being arbitrary and capricious in violation of Virginia Code § 22.1-87.  These children will shortly be applying to TJ and allege, through their parents, they will be adversely affected by the changes.

The lawsuit concerns an October 6, 2020 work session of the Fairfax County School Board in which the board voted to abolish the use of certain standardized tests in the admissions process including the use of the Quant-Q, ACT Aspire Reading, and ACT Aspire Science tests. On October 7, 2020, Scott S. Brabrand, the Superintendent of Fairfax County Public Schools, implemented the recommendation of the School Board.  Brabrand is named separately in the lawsuit as a defendant.

One of the plaintiffs, Srinivas Akella, has a son in the seventh grade who aspires to attend TJ.  Mr. Akella stated the following regarding the elimination of the testing: “It just feels like a slap in the face. All this hard work was to show his aptitude.”

The complaint alleges, and I personally agree, that a work session of the School Board is not the proper forum to resolve such a controversial matter and that public comments should have been allowed prior to a final judgment being rendered.  Specifically, the complaint states at paragraph 69 that: “For the October 6, 2020 work session, the published agenda did not advise the public that potential admissions changes would be brought to a vote. On the contrary, the published agenda made it appear that potential changes would only be a matter of information and discussion.”

It’s probable that a Fairfax County Circuit Court judge will take a look at this complaint and send this matter back to the School Board with a requirement that the board allow for public comments.  In other words, in my opinion it is likely the court will issue a preliminary injunction preventing for the present time the elimination of standardized testing in the admissions process.  It is unlikely that any judge will impose a permanent freeze whereby admission standards at TJ can’t be changed no matter what the circumstances are.

The plaintiffs are represented by Bill Hurd and Chris Carlson of Troutman, Pepper, Hamilton, Sanders, LLC. Bill Hurd is one of Virginia’s most prestigious attorneys and was Virginia’s Solicitor General from 1999-2004.  Given the complexity of this matter it is my guess Mr. Hurd and Mr. Carlson spent a considerable amount of time researching and drafting this complaint.

The lawsuit may be read here.