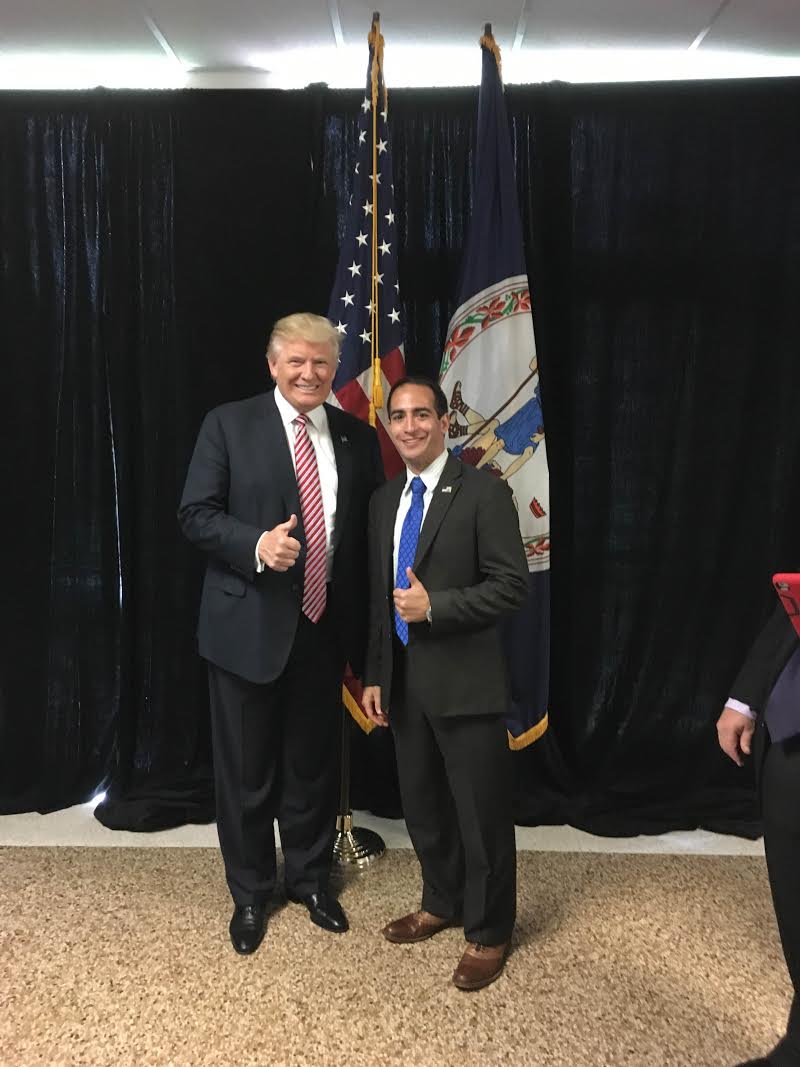 LCRC Chair on The Trump Rally in Ashburn

Today I went to the Donald Trump rally in Ashburn, VA. Since I know good people can disagree over whether or not to support Trump, I am just going to post some candid thoughts below. I report, you decide!

Since I am the chairman of the Loudoun County Republican Committee, I was working with the campaign in advance of the rally. On Monday evening, a senior Trump staffer emailed me and asked me if I would be willing to give the invocation at the rally. I said I’d be happy to, but I also told him that as a born again Christian, I end my prayers with “I pray all of this in the name of Jesus.” Since I know that in this day and age mentioning the name of Jesus can offend some people, I said I’d understand if they preferred that someone else give the invocation. His response to me was: “We know that’s how you pray, that’s why we asked you.”

After the welcome (by Republican Party of Virginia Chairman John Whitbeck), invocation (by yours truly), pledge (by Loudoun County Sheriff Michael Chapman), and National Anthem (by Briar Woods High School Teacher Nina Peyton), we waited back stage to get a photo with Donald Trump. And then – he was there, with a crowd of staff, Loudoun County Sheriff’s deputies, and Secret Service. I was immediately struck by his presence – he radiates confidence, but also I was struck by his soft spoken demeanor. He spoke softly and thoughtfully the entire time we were backstage.

The first person to get a photo with him was an older man. We had been chatting before-hand while all of us were waiting for Trump to arrive, and he introduced himself as Lieutenant Colonel Louis Dorfman and he had served in the 82nd Airborne. He shook hands with Donald Trump, and handed him his Purple Heart saying he wanted Trump to have it as thanks for standing up for wounded vets. Trump was surprised and said something like “I can’t take this!” We were all surprised and not expecting this. It was pretty cool to see the respect this veteran had for Trump.

Then it was my turn to shake hands with Trump and get my photo taken. I told Mr. Trump that I was the chairman of the Loudoun County Republican Committee and he immediately stopped and looked at me: “Will, how do I win Loudoun?” he asked me. We started talking and he called over one of his staffers. “George, these people here in Virginia know what we need to do to win Virginia.” And then – in a really cool turn of events – John Whitbeck, the GOP chairs of Prince William County and Arlington County, Trump’s campaign staffer, and me are all huddled in a corner, photos forgotten, strategizing on how Trump will win Virginia. Trump didn’t do a lot of talking. He listened to all of us, he made sure his staff had our emails, and he said that we would have everything we needed.

As we finished up the photos, Trump looked at all the Sheriff’s Deputies. “Let’s get them in the photo,” he said. And then he was taking group photos with all of the cops. They loved it. In fact, my favorite photo I took was all of the deputies with Trump. I was struck by how Trump didn’t forget the “little people.” Even though it was just a few of us and no media, he was relaxed and took the time to get photos with everyone.

The rally itself was super cool. Lots of energy, packed room (something like 2000 people had to be turned away because the auditorium was packed – and just on 24 hours notice!), everyone stood the entire time even though they all had seats. Trump discussed the importance of the Supreme Court, and gave a shout out to the Federalist Society and the Heritage Foundation for endorsing his selection of 11 potential candidates he had for Supreme Court nominations. He specifically said that he would appoint justices like the late Justice Antonin Scalia. He also mentioned how the Second Amendment was critically important, and that he would protect our Second Amendment rights.

One thing I want to mention is the baby crying, because that has been national news. Contrary to news stories, it was a very funny thing, Trump was very supportive of the mom calling her and her baby “beautiful” and “wonderful”, and then when the baby kept crying he turned it into a joke. Everyone was laughing and it was actually very endearing and funny. Not at all anti mom or anti baby like the media has portrayed it to be.

Which brings me to the final point: I was there and saw and heard the entire event with the mom and baby. There was nothing to it. But then after I’m reading all the news coverage saying “Trump hates moms and babies!!!” I started to doubt myself. Did I really miss a huge story right in front of me? I started asking others who were there, including a husband and wife with young kids. And everyone in the room said the same thing: there was no story here. Trump was being funny and personable and going out of his way to make sure the mom wasn’t embarrassed by making it a funny situation. My conclusion is that the media is selling us a narrative. Be very skeptical of what the media is telling you, because I saw it with my own eyes and it was something very different.

Will Estrada is the Chairman of the Loudoun County Republican Committee, and is an attorney. He and his family reside in Leesburg, Virginia.

Will Estrada is the Chairman of the Loudoun County Republican Committee, and is an attorney. He and his family reside in Leesburg, Virginia.