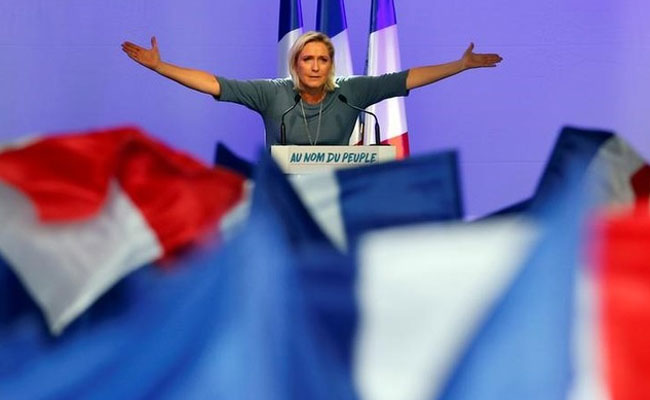 Le Pen and the French Connection

Wow. If you’re following the French presidential election and you can’t figure out what’s going on, you’re in good company.

Marine Le Pen, the former leader of the National Front Party and Emmanuel Macron, the former Finance Minister in the Socialist Party, are headed to a runoff election on May 7th.

The corporate media in the U.S. and Europe is branding Ms. Le Pen, who ran second in the general election, as the “far-right” candidate. That political moniker, of course, is deliberately used to suggest to the ill-informed that she is a fascist, or Nazi, even though that ideology fits on the totalitarian-socialist left.

Mr. Macron in contrast is consistently referred to as the “centrist” candidate in the media in spite of the fact that he was a Socialist last year, suggesting to the ill-informed that he is a man who has moved beyond labels and brings moderation to all of his polices. There is no evidence whatsoever to make that case.

Shocker alert: The corporate media is trying to drive its own political agenda.

As far as one can tell from their stated platforms, these are actually two left-of-center candidates on general economic policy, both of whom propose to tinker around the edges of the centralized economy. They both want to cut taxes in the margin, Ms. Le Pen using the tax rate and Mr. Macron the property tax. One key difference is that Ms. Le Pen wants to reward French businesses that remain in France employing Frenchmen, and is willing to use the tax code to accomplish that objective.

She would keep the 35 hour work week, while Mr. Macron would allow some type of union-employer negotiation. Both are talking about eliminating some of the civil service, and Ms. Le Pen wants to add to the police force.

If anything, Ms. Le Pen seems to have more definitive ideas on what specifically she would do, while Mr. Macron is vague.

But, beyond that, it’s France folks. The only thing certain about the next President of France is that he or she will not be a student of Milton Friedman.

The real issue facing the French is the same question that is gnawing at many citizens throughout Europe, and the U.S. as well:

How do we want to live, work and raise our families? In what kind of culture and society? Do individuals get a voice in the question? Do we control our destiny and our borders, or does that choice belong to an elite class of politicians, bureaucrats and transnational corporations? Are national interests more important than pan-globalist interests? Do borders and national identity even matter, and who gets to decide that?

For her part, Ms. Le Pen has proposed a list of objectives summed up in her campaign slogan, “Choose France.”

Mr. Macron has also changed his “Forward” slogan (sound familiar?) to “Together. France,” which is fittingly vague.

Ms. Le Pen wants to hold a “Frexit” vote to leave the European Union, as the UK did last year, and “re-establish” French borders by leaving the visa-free travel zones within the EU. She also wants to bring back the French franc, replacing the euro.

But, most dramatically, Ms. Le Pen wants to end virtually unlimited immigration that has turned French society upside down, and left large areas of a number of French cities “no go” zones populated by Muslim immigrants, mostly on the dole, who have been unwilling or resistant to assimilation into French society. Her plan calls for a net inflow of only 10,000 immigrants a year.

She is openly promoting a “France First” vision that extols the historical and cultural identity of the French people. In foreign policy, Ms. Le Pen advocates leaving NATO’s military structure, again. France is an independent nuclear power and left NATO in 1966, only to resume military integration with NATO in the late 1990’s. While some in the US media are alarmed by this position and her call for a new “realism” in foreign policy, it doesn’t represent a radical idea in France. They are just being French.

Mr. Macron in the meantime is doubling down on his passionate support of increased integration of France into the European Union down to the last croissant. He supports wide open borders and the flow of any worker within the union to go to any member country, and he wants to see an expansion of the EU through empowering elected zones within the union. He remains a supporter of current immigration patterns in France, and supports in his vague way, “most trade agreements.” Which, of course, means he supports them all.

So what are conservatives to make of all of this? In some ways at least, the French election mirrors the argument over the 2016 election of President Trump, and the Brexit before that.

It all depends on how you define “conservative” and how you see nationhood, and the role of the Constitutional order and individual rights.  And since the label “nationalist” is being thrown around a lot, what do conservatives think about that?

President Trump has stoked this discussion by his “America First” campaign – with some conservatives cringing at the connotation and historical framing of that notion; others are rejecting the idea outright; while still others are supportive of key elements of Mr. Trump’s America First strategy.

Many conservatives will agree with Ms. Le Pen that the EU, like the UN, is a thoroughly undemocratic, socialist model that can come to no good. The track record for that assumption is very persuasive.

More than a few conservatives look at massive corporate trade pacts and see more feather-bedding and crony capitalism than they see free trade, and have begun to question the immense legal implications for the future of personal liberty, as well as national defense issues if these trade deals are not vetted properly.

Likewise, many conservatives break with their libertarian counterparts over the idea of open borders and the “any willing worker” concept. Many see largely uncontrolled immigration and the encouragement of multiculturalism as opposed to integration and assimilation, as a sure path to increased poverty, cultural collapse, and finally the abandonment of Constitutional government.

Regardless of the success or failure of Ms. Le Pen, or even Mr. Trump, these issues are not going away. In fact, they’ve only begun to be dissected and discussed.

And as the worlds only Constitutional Republic that defines the limits of government power to abridge liberty, the world will be watching us, long after the French election is settled.

President is a placeholder title. The leaders of France are in Brussels.