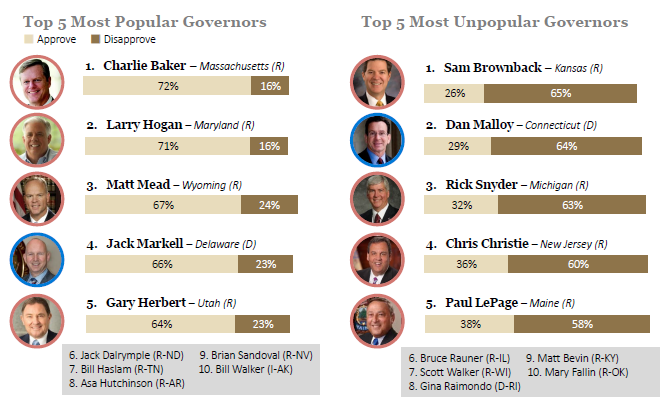 Most (and Least) Popular Governors–McAuliffe at 58%, Hogan at 71%

Virginia’s Governor Terry McAuliffe has an approval rating 58% with disapproval on 24%. Â The survey must have been completed prior to McAuliffe pardoning 206,000 felons, with 21% or about 40,000, being violent felons.Â  Â That couldn’t have been a popular move by the Governor and it’s probably not even legal. Governor has released a data page on the felons he has pardoned, including age, gender and race. Â Republicans in the General Assembly have hired high powered DC attorney Charles J. Cooper to challenge McAuliffe’s actions.Â

An interactive map of the popularity of all Governors here.Â

Dammit! If I don’t like the results of the survey, I’ll poison the well by including lots of hyperlinks & theories of why it can’t possibly be true! It just can’t be true! No, it can’t be!

McCaullife has emulated the administration in DC from the Governor’s Mansion with all these overreaches and power grabs. Unfortunately, I expect us to be in his presence again at the War Memorial in two weeks

Staying home with a paper bag over your head would solve that problem.

And with McAuliffe reigning over a period of 0 growth, how can anyone like him in Va?

Wow. A Republican governor wildly popular in MA? How is that possible? How is it possible that he was elected? I guess if a Republican politician does not kowtow to the Bible thumping crowd, he is more electable.

Eight of the ten top Governors are Republicans!

Eight of the ten bottom governors are Republicans, too.

Slick Terry’s popularity hasn’t collapsed only because he hasn’t been been able to accomplish anything due to the majority of the state wisely keeping a solidly Republican legislature.