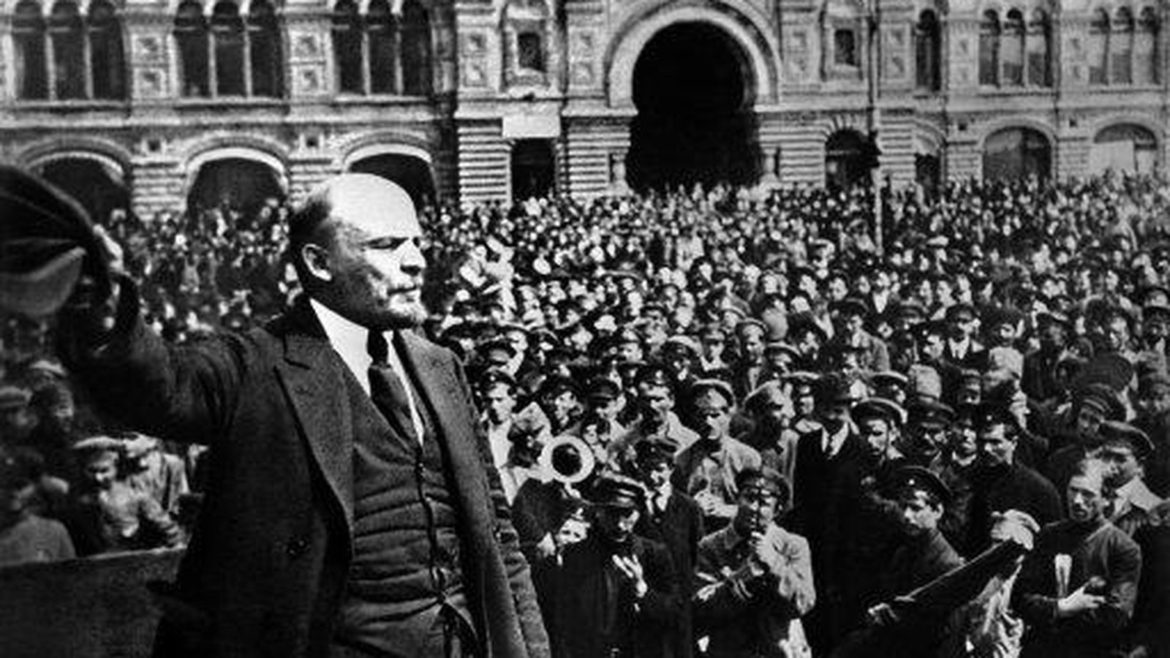 Americans today are probably learning, by first-hand experience, more about leftist strategies for taking control of a society than they ever learned in school. If you studied anything about the Russian October Revolution (which actually happened in November 1917), you might think that Lenin and the Bolsheviks just walked in and took over the place in one grand move. Voila! All of a sudden they were in charge.

In fact, years of preparation preceded the commies’ final Russian takeover. The keystone of that preparation was three years of disastrous war which cost Russia 1.8 million killed, 2.8 million wounded and 2.4 million taken prisoner. Besides that staggering human cost, the country was financially impoverished, the 300-year-old Romanov dynasty got the boot, the entire political system was thrown into turmoil, and people were literally starving.

All this destabilization prepared the ground for Lenin and the Bolsheviks, who showed up in 1917 with a simple message: “Peace! Land! Bread!” Lenin promised to stop the war, make sure everyone had enough to eat, and enable everyone to find work and provide for their families. It was a message that people longed to hear and believe. They let the Bolshies take over with hardly a shot fired.

Although America has resisted communism for a century, the Bolshies never quit. Today we’re engaged in a renewed social and political struggle against the heirs of Marx. We’re not recovering from a disastrous shooting war, as the Russians were. But we are recovering from a “medical war” against a virus which has killed over half a million of our citizens and dealt us a serious financial blow. One of our political parties has used the epidemic as a political tool to gain control of the legislative and executive branches of our federal government.

Like World War I for Russia, the COVID-19 pandemic has been the preparation phase for leftists’ serious attempt to bring us under their control and convert America into an entirely communist state. With victory in sight, leftists are throwing in the kitchen sink to implement their playbook. This includes implementing these foundational principles:

Upheaval and Chaos. Complementing the disorder caused by the COVID epidemic, leftist provocateurs have engineered riots across the country in nearly all of our largest cities. They have also pushed a radical “defund the police” campaign which has caused significant increases in crime. All this produces a desperate longing for peace and order among the people, and paves the way for leftists to ride in and save the day. Societal upheaval always precedes takeover by radical forces. Lenin, Mussolini, and Hitler all gained control of their countries by answering the people’s desire for deliverance from ongoing violence and disorder, which those “leaders” had actually fomented.

Targeted Policies. Lefties always start out with crowd-pleasing policies that help solidify their support among the people. This typically involves huge federal expenditures, like those being fashioned by Democrats at this very time. Federal (printed) money flows like water, and everybody is happy. People of limited means welcome those government-checks, and big money guys anticipate that federal bucks will drive up stock-prices in the financial markets. But grandma used to say, “Honey first, then the medicine.” Inflation caused by all that deficit-spending lurks up ahead, but Democrats don’t care. They’ll just blame Republicans for it. Millions of voters never make the connection between federal spending and inflation.

Hurt only a Few. Enacting policies which hurt small groups, but appear to leave most people untouched, is a classic leftist tactic. Joe Biden started employing it on his first day in office, when he cancelled the Keystone Pipeline project, blocked oil-drilling in federal lands, and opened the borders to unlimited numbers of illegal immigrants. Most voters yawned when he issued those orders – probably thinking that they wouldn’t be affected. After all, only a few thousand pipeline workers lost their jobs; and who cared about a few border-crossers? (Aren’t we all descendants of immigrants?) But that thinking was too naive by half. Gas prices at the pump quickly zoomed up by 50%, and “a few” illegals swelled to a flood of over a million in Mr. Biden’s first half-year. Officials say as many as 16% of them are COVID-infected. Wider effects are always the hidden gremlin in policies which seem to hurt only a few. Leftists rely on ignorance of the people, plus media’s criminal lack of curiosity, to get away with using this tactic over and over.

Republicans haven’t made much noise about good old “Moderate Joe’s” leftward lurch, although some are starting to express alarm, as his orders grow more and more extreme. Others seem to be relying on the Supreme Court to strike down orders which are unmistakably un-Constitutional. Mr. Trump appointed three justices to the Court, giving it an (apparent) conservative majority of 6-3. Surely they will strike down the worst excesses until Republicans can regain control of the Congress.

Maybe this will work out as Republicans hope, but they might be in for a surprise or two. Over the past 70+ years, the Court has seemed all-powerful, issuing one society-altering ruling after another – from desegregation of schools to legalization of sodomy. Through it all we have mostly saluted and moved on with our lives. (“Here come da judge!”)

But somehow, most of us failed to notice that the Supreme Court didn’t really “enforce” their rulings. There are no Supreme Court cops. The Supremes can’t hold anyone in contempt or throw anybody in jail. There’s only the people’s willingness to obey Court rulings, plus the cooperation of the other branches of government to support that obedience. When any of those legs of support is missing, it’s as if the Court didn’t rule at all. This is the limitation (and the dirty secret) of Government by Supreme Court.

In fact, we’ve seen an example of this limitation very recently, after Mr. Biden extended his earlier moratorium on evicting tenants who weren’t paying their rents. The original moratorium was due to end on July 31st, but Mr. Biden ordered a 60-day extension. He did so despite White House acknowledgement that the Supreme Court had ruled that he and the CDC lacked authority to order or extend the moratorium. Evidently, Democrats now feel comfortable with deciding which Supreme Court rulings they will obey, and which they will ignore.

By openly ignoring this Supreme Court ruling, Mr. Biden has thrown all the political orbits into confusion. Political analysts point out that his action damages the crucial contract-construct which is the foundation of all business dealings. If a president can unilaterally undo a contract, after a legal deal has been made, there’s no telling which contracts might be next on the chopping block. Business will degenerate into presidential influence-peddling. (Maybe we’re already there.)

Long ago, during the Nazi-era, a German pastor named Martin Niemöller penned a famous poem which chronicled how the Nazis hit one group after another, while others did nothing. With apologies to the Herr Doktor, I present an American adaptation of that poem:

These are dangerous times. We need to lend a hand to any who are being hurt by radical policies. Let’s not sit idly by until it’s too late.

“We must, indeed, all hang together or, most assuredly, we shall all hang separately.” (Benjamin Franklin)

Great read, enjoyed learning a little more of the Marxist takeover and how it all ties together

Dear Woody,
This is one of your best !!! I’ve just read Mark Levin’s new book, Marxism in America. He agrees with your analysis entirely.
Back at Houghton I never realized how smart you are. I’m thrilled that God is still using your analytical mind to challenge us to prayer and action.
Your old roomie,
Hal

An excellent and poignant article.

Superb, Woody. In the words of my school’s Senior Council motto: Ignorance Is No Excuse. Things are turning very ugly. Each of us must look for ways to engage people we meet — including strangers — in conversation about history repeating itself for those who refuse to heed its lessons.

Excellent WZ. I would only add that not only is the regime ignoring the SCOTUS, they are ignoring the immigration laws long on the books passed by multiple Congresses. Hardly a Republican seems to care, much less voice their concerns. They are too busy supporting the insane “infrastructure” bill. It’s all a free-for-all, ransacking the country and demanding you shut up while the do it.

The Republican Party has been infiltrated by RINOs. See bearing drift as a prime example.