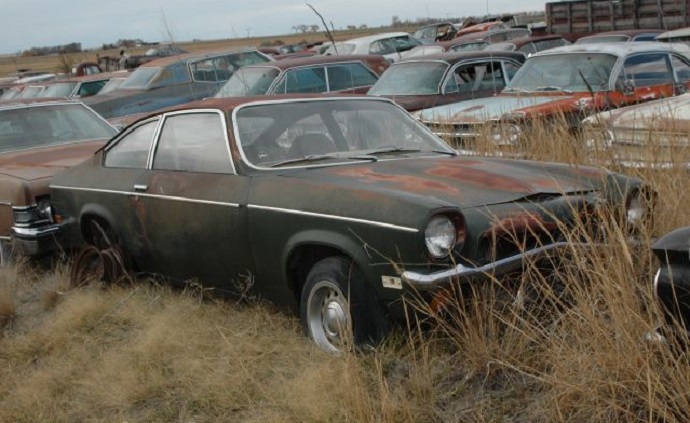 ObamaCare is a â€™71 Chevy Vega.Â  It is low on oil, has bad tires and the ball joints are loose.

In 2016 about half the counties in the United States had only one insurance provider through the ACA healthcare exchange program.Â  Major companies like Aetna, United Health and Cigna have already withdrawn from many of the exchanges because they were losing lots of money underwriting ObamaCare.Â  In the next few months the few remaining insurance companies will have to decide if they will continue to participate in ObamaCare for 2018. (They wonâ€™t – ObamaCare will collapse).

So what do Republicans almost do?Â  Snatch defeat from the hands of victory!Â  They introduce ObamaCare Light under the guise of TrumpCare or RyanCare.

Please do not repeal, do not replace, ObamaCare!Â  Let it die the miserable death it was designed to do.

For the past 100 years the Leftâ€™s socialist grail has been single-payer government provided healthcare.Â  The Left knew they couldnâ€™t force nationalized health on the public in 2008, but in 2017 after the coronation of Hillary Clinton, the Democrats would come to the rescue the Affordable Care Act from those evil and greedy insurance companies who abandoned ObamaCare.Â  Democrats would expand Medicaid until it became the Nationalized Health Care they have always yearned for.Â  Understand the Democrats purposely designed ObamaCare to fail to give them this path to Nationalized Health.

What the Democrats didnâ€™t predict was a President Donald Trump.

Whether it was planned, or Donald Trump was just really lucky, it is a blessing TrumpCare failed.Â  If the Republicans were successful in repealing, or worse replacing, ObamaCare with their own policy then the Republican Party would be holding the keys to the upcoming crash of the healthcare system.Â  It would be the Republican Party, not the Democrats, who would face a jury trial of the American public.

My advice â€“ let ObamaCare fail with the Democrats still holding the Title.Â  Reassure the American people this Republican Administration will take care of those who will be harmed by the pending ObamaCare car wreck until a market-based, cross-state line, patient driven healthcare system that gives the American people the freedom to choose what products and services they wish to buy is in place.

ObamaCare is churning out blue smoke and is about to throw a rod.Â  Republicans do not want to be driving this car.

Here is why modern conservatives are losing traction in the national voting population at what appears to be an alarming rate. Will Obamacare collapse under it’s own weight and policy inconsistencies – likely yes. Is that a rational method to move forward? Well if you believe the best method to demolish a building is to just let it deteriorate in place in the neighborhood until it collapses in on it’s self and any poor individual that might be walking home on the sidewalk below (e.g. that is there problem) I assume you are just fine with that solution. But most rational people would prefer to bring in some experts with building demolition expertise to manage a controlled implosion that doesn’t risk collateral damage to the American population and fellow voters. This isn’t solving a problem it’s turning you back on it. Countless modern conservatives still can’t quite grasp why they seem to consistently fail to place fellow modern adherents of this mutated version of Reagan era conservatism in higher public office consistently. Here it is.

How many Chairman do you guys have?

Letting people suffer should work wonders for the Republican brand.

How many got coverage, how many lost coverage?

How much did it cost before, How much after?

You make me laugh. For 8 years under the Bush 43′ regime, we endured double digit annual increases in the cost of health insurance, healthcare, and drug company rip offs. Republicans didn’t give a damn about people suffering under the high cost of health related issues.

And now, we are supposed to believe that the Republicans are crying for those who have had to endure the about 5.5% annual increases under Obamacare. I can’t stop laughing at this BS.

If Obamacare is so great then you should have no worries about insurance companies continuing to flee the healthcare exchanges, like they have done every previous year.

By the way, after having my insurance premiums double and deductibles triple I am still waiting for the $2500 reduction in my healthcare premiums Obama promised … and I sure do miss my old doctor.

Affordable healthcare will never happen with the checkbook lobbyists in charge.

I’m not a fan of the healthcare legislation Ryan tried to push, but I can’t seem to find any evidence in the bill or elsewhere it was backed by Putin. Would you please provide the source so I can read it?

Sure, when Putin backed the candidate Trump, he also backed that candidates legislative agenda if elected.

Putin-Trumpcare belongs to Donald J Trump, and no one else. Nothing could be as corrupt as Putin-Trumpcare, without outside interference.

Only now are we ‘entitled’ to Healthcare right?

You are absolutely right that Democrats have dreamed of a single payer health care system for years.

You are absolutely correct that Obamacare was designed to fail.

You are absolutely right that we dodged a bullet when Trumpcare was pulled.

Our only real solution is to repeal Obamacare and then go to work on solving the problems that are driving up health care costs.

Sorry but you will not get a repeal from the gang currently in charge.

Why is it called single payer rather than government pays all?

Because Government is the single payer and ‘Government Health Care’ didn’t test well in focus groups?

Don’t worry health insurance companies are not going bankrupt but they have been loosing tons of money in the Obamacare exchanges which they will announce their exit from this summer.

That event will mark the end of Obamacare.

In the ‘Art of the Deal’ you negotiate from a position of strength, or as Rahm Emmanuel says “Don’t let a good crisis go to waste”

The failure of the health exchanges this summer will give the Republicans a better chance for some real healthcare reform.

“Don’t let a good crisis go to waste”. That is exactly what Republicans just did by passing the internet privacy deregulation bill under the “cover” of the Putin backed, anti-American Trumpcare disaster.

Notice how the Wall St. owned MSM comes in and announces the bill AFTER it has been passed in both the US Senate and House.

Yeah, that’s the scariest part. The uniparty showed its cards.