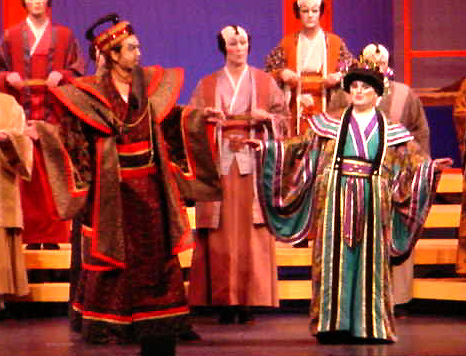 Scene from The Mikado

Let the Punishment Fit the Crime

It is my very humane endeavour
To make, to some extent,
Each evil liver
A running river
Of harmless merriment.

All prosy dull society sinners,
Who chatter and bleat and bore,
Are sent to hear sermons
From mystical Germans
Who preach from ten till four.

The advertising quack who wearies
With tales of countless cures:
His teeth, I’ve enacted,
Shall all be extracted
By terrified amateurs.

The billiard sharp who any one catches,
His doom’s extremely hard —
He’s made to dwell
In a dungeon cell,
On a spot that’s always barred.

And there he plays extravagant matches
In fitless finger-stalls
On a cloth untrue
With a twisted cue
And elliptical billiard balls!

Gilbert and Sullivan’s comic opera, The Mikado, features the wonderful song (above), “Let the Punishment fit the Crime,” which exhibits W. S. Gilbert’s puckish impulse to lampoon various aspects of 19th-century British society and government. (Really, can anyone write like that now?)

Several of the verses could almost have been written today, including the one about “prosey, dull society sinners who chatter and bleat and bore.” I love their sentence of listening to “sermons from mystical Germans who preach from ten to four.” Either Gilbert was writing prophetically about 21st-century American media, or else things really haven’t changed all that much.

Perhaps it was a certain weariness over the incessant stream of dreary news about corruption in high places that made me think of this mischievous song, and led me to reflect on how to punish the various federal law-enforcement leaders who are implicated in the political perversion of their agencies, before and after the 2016 election. So fixated were they on the “danger” of a Trump-win that they conspired to invent “evidence” which they then used to obtain warrants from the Foreign Intelligence Surveillance (FISA) Court. Those warrants allowed them to surveil various Trump-associates who had not really done anything illegal. But it was a useful ruse to enable legal spying on the Trump campaign. Knowingly presenting false “evidence” to a Federal court is a clear violation of Federal law, as well as societal and Biblical morality (if any of these matters anymore).

Their fitting punishment might be a sentence of solitary confinement in small cells, where each would have to listen to endless recordings of conversations randomly intercepted from ordinary households about work, laundry, school-grades, meals, finances, credit card use, teen curfews, messy rooms, infidelity, church socials, TV programs and all the other minutia of ordinary Americans’ lives. Some recordings might include people speaking foreign languages. Interspersed might also be recordings of vacuous arguments between show-biz “valley-girls” about acting-roles, wardrobes, who is sleeping with whom, who wants to sleep with whom, who is gay or straight, who’s creepy, who’s a mama’s boy, and who makes how much money.

The play-backs would continue even through the nights, while the prisoners try to sleep. Experiments conducted in Nazi concentration camps showed that prisoners subjected to such treatment eventually crack up and try to escape by ramming their heads into the walls. In our humane application of the “eavesdropping” punishment, however, Obamacare medical teams to treat head-ramming injuries would be no more than an hour away.

Media figures so obsessed with getting Mrs. Clinton elected (and torpedoing Donald Trump) that they abandoned all professional pretense of balance and accuracy might receive a modernized form of the “sermons by mystical Germans” punishment. As no mystical Germans are available, they would have to watch endless videos of Mrs. Clinton speechifying, cackling, making verbal gaffes, affecting an Ebonics accent, hugging Bubba-Bill on stage, and being tossed into her van like a rag-doll.

In the interest of diversity, her speeches might be translated into Swahili, Farsi, Russian, German, Polish, Lithuanian, Hindi, Chinese and assorted Balkan languages. To break up the monotony – which psychiatrists know will soon drive any normal person mad – the Hillary-clips might be interspersed with films of cheering crowds at Trump rallies, clips of his speeches, and films of repulsive, scantily-dressed women parading around in vagina-hats.

Never-Trump politicians of both parties would receive an approximation of the billiard-sharp’s punishment by being required to wear shapeless black pantsuits (including Mao-style jackets) for the duration of their sentences. Female prisoners of any age would have to undergo “uglification” treatment to render them no more attractive in appearance than Mrs. Clinton. Females already meeting this standard would be exempt, but both men and women would have to wear blonde wigs at all times.

The doomed politicians will have to participate in daily 18-hour mock legislative sessions, presided over by a Russian actor costumed as the Alice in Wonderland Red Queen, who keeps shouting, “Off with his head!” The politicians will all be required to speak with a faux Ebonics accent (e.g., whu dem boy go at?), except for minorities who will have to affect Boston Brahmin accents. Electrical prods will be imbedded in convicts’ pantsuits to prevent any from sitting down for more than five minutes. Nonsense-issues – e.g., the color of toilet-seats in gender neutral bathrooms – will be debated endlessly, with no votes ever taken. For the sake of historical accuracy and humane diversion, a billiard table, equipped with “a cloth untrue, a twisted cue, and elliptical billiard balls,” will be provided in one corner of the chamber.

Other appropriate sentences can be handed out on a case-by-case basis. Never-Trumpers who were the most fanatical advocates of Clintonian government could be sentenced to live in environments that already approximate Mrs. Clinton’s vision for what America ought to be. Those locales would include: numerous dysfunctional, one-parent families; a high incidence of violent crime; lax (or non-existent) law enforcement; dangerous, failing schools run by political hacks; and markets that charge outrageous prices for shoddy goods.

In particular, those “Cintonistas” who most avidly agitated for open borders and uncontrolled illegal immigration would be resettled in areas heavily populated with “undocumented” persons, where business is conducted only in foreign languages by merchants who speak or understand little English. Pols who had made entire careers by pandering to Muslim immigrants would be required to live in all-Muslim neighborhoods that are governed by Sharia law, where it can be a capital crime for a woman to walk outdoors unless she is dressed in traditional “burqa.” The Obama family would be among the first selected to receive this sentence. (I am certain that they will welcome and fervently embrace it.)

More creative punishments for deserving miscreants can undoubtedly be found, as I devoutly hope they will be. So much work to do. So little time.

See a clip of “Let the Punishment Fit the Crime” at 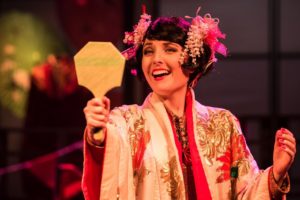 Yum-Yum from The Mikado