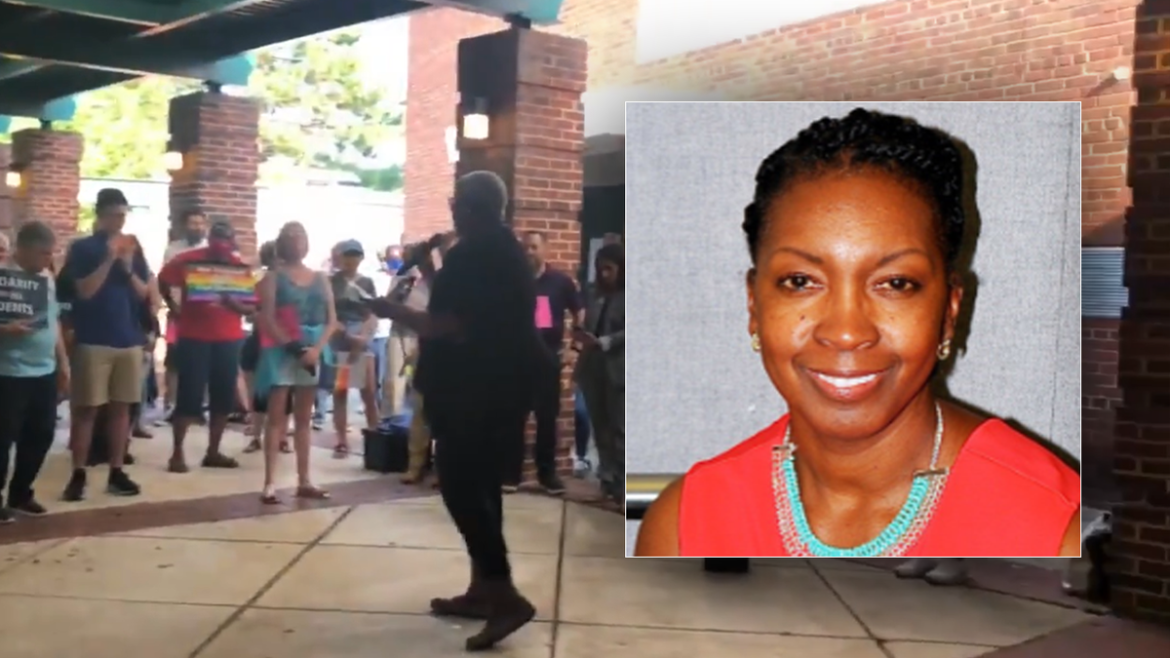 The rhetoric is getting ugly out there, folks.

In a counter-protest (against those protesting the enactment of admissions policies that discriminate against Asian-American students) at the Thomas Jefferson High School for Science and Technology, Michelle Leete, an official with the Fairfax County NAACP and state and district PTAs, said the following:

Then came the line that that triggered applause from the overwhelmingly woke White audience:

Asra Nomani, an Indian-born activist and protest leader, responded to The Daily Wire as follows:

What we heard tonight was hate speech, pure and simple. It was shocking that anyone would cheer and applaud a call to violence… Ironically, her hateful, intolerant words are a perfect illustration of the divisive ideology of critical race theory in action. In the name of tolerance, it preaches intolerance and is a betrayal of all values of humanity and decency.

As far as I can tell, not a single Virginia media outlet covered the speech. The Washington Post did run an article about a decision by Fairfax County school superintendent Scott S. Brabrand to leave at the end of the contract — but nothing about Leete’s quote. As the Washington Post tag-line says, “Democracy Dies in Darkness.”

Yes, that’s true. And the Post is turning out the lights.

From the excellent Virginia blog baconsrebellion.com

TBE UPDATE: Michelle Leete has resigned from her positions on Virginia PTA and Fairfax County PTA. From Townhall.com:

Who applauded Leete. Were they teachers? politicians? Parents? Why is nobody interested in interviewing them to get their side of the story. Maybe they think that “let them die” is a perfectly responsible statement. The news media, if it were responsible, would track down a few attendees of both rallies. Strangely, they are uninterested in what is a national news story.

I believe that you are suggesting that Leete be arrested for inciting violence. As far as how many guns she owns, we won’t know and won’t until she is arrested and her house searched. As far as how many BLM/ANTIFA riots and other terrorist attacks she has participated in, that remains to be investigated.

Hey, Doc! I think what WTF? is suggesting is that a unlike rightwing activists, the answer is likely “none” and “none”.

Opinion Suppression is always the directive of Democrats.
This is clear evidence of that.

School Vouchers are a must to protect Free Thinking People and advance our Children over the Sub Par education that today’s Virginia Democrats provide.
There are many aspects of Government Funding that use NGO’s to accomplish task the Government can’t handle.
It is well past time for these cowardly Virginia Democrats to produce results not just mere lying pickup truck campaign adds.

Just watch where she shows up next. People like this never just quit. They’re simply reassigned.

I assume she is already screaming racism although it is likely that she will disappear for a month or two only to reappear in a position where she can do further damage. However, she is a tool to the socialist and communist ideology and you never know whether the tool will be used or thrown away for the interests of the state.

Speaking of “Let them die. ”

For the past four months, 99.5% of all COVID deaths have been people who were not vaccinated. The states with the lowest vaccination rates are all ruled by Republicans. Fox, OAN, Breitbart are at the head of the pack spreading lies about vaccinations.

Meanwhile, there’s this: One of the richest areas in Dallas, the Park Cities, reached 80% adult vaccination rates back in May. They are very Republican, very wealthy, but not stupid . . . .

You are stuck in the pst once again.

Last Week: there were 1,918 total COVID-19 deaths in the United States.
Last Week: There were 2,092 deaths from the COVID Vaccines — According to the CDC-linked VAERS website.

Her reaction and comments are exactly is what is taught with crt and 1619.
You become a devotee and instigator of hate. No one should be surprised.
All of the Va. dem representatives, along with northam, fairax and herring attended the commemoration of 1619 at old point comfort
in august of 2019. That was their go ahead signal to their approval of crt and 1619.
They are responsible for turning Va. upside down and inside out.

Hate deserves no applause. I’m glad she’s out. She was, and is, stupid!

unfortunately, she is quite representative of this communist and socialist ideology now in charge of the American government