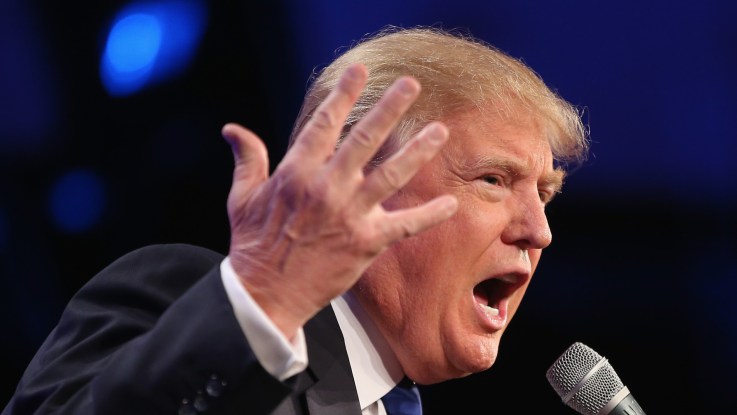 Will Donald Trump’s ego destroy his campaign before it destroys America? We can only hope.

For months, Donald Trump and Senator Ted Cruz had a truce. While Donald Trump mocked and took shots at the rest of the field (a field that was attacking him), he left Ted Cruz alone, just as Senator Cruz left the rest of the field alone. Ted Cruz’s rise in Iowa has the Donald exploding in schizophrenic fits of incomprehensible rage and ridiculousness all over ABC and Twitter.

Trump, still unhinged from the beating he took in the South Carolina debate, spoke with George Stephanopoulos of ABC, saying of Cruz, “Nobody likes him. Nobody in Congress likes him. Nobody likes him anywhere once they get to know him. He’s a very –- he’s got an edge that’s not good. You can’t make deals with people like that and it’s not a good thing”.

You see, Donald Trump is all about compromise. He’s a major financial backer of people like Hillary and Bill Clinton, Nancy Pelosi, Harry Reid, and Mitch McConnell. These are people that Donald Trump likes. They are easy to work with because they have no principles. They are easy to purchase because they place their own ambition and power above that of their constituents.

Donald Trump does hate Senator Ted Cruz for all the reasons conservatives love him. He doesn’t compromise. He’s not for sale. Trump, who buys and sells politicians like goods and services, cannot comprehend a politician that makes decisions based on things like the United States Constitution or the promises he’s made to his constituents.

For Trump, everything is a deal and everyone has a price. The more corrupt the politician, the cheaper they are, and the easier they are for billionaires like Donald Trump to influence. As President, the one thing Donald Trump would fear more than anything are Senator’s like Mike Lee, Rand Paul, and Ted Cruz. We all saw how much The Donald despised Rand Paul for calling him out on his duplicitous political background. Ted Cruz did something far worse than that, however. Ted Cruz started to catch Donald in the polls.

Men like Trump care about one thing and one thing only – power. He wants control over our government and over our lives. His rambling and incomprehensible campaign speeches are 100% rhetoric. Donald Trump understands that if he tells angry people what they want to hear, they’ll follow him. This frightening quality of Donald Trump reminds me of several European and Asian leaders that had quite the bloody and violent impact on the world.

At the end of the day, the Republican Party needs a nominee that won’t compromise, that won’t sell out the American people to special interests like Donald Trump. Donald Trump is all about the deal, all about twisting arms, lobbying, and compromising to get what he wants. The first people that Donald Trump will sell out if he did become President would be the usual idiots that supported him.