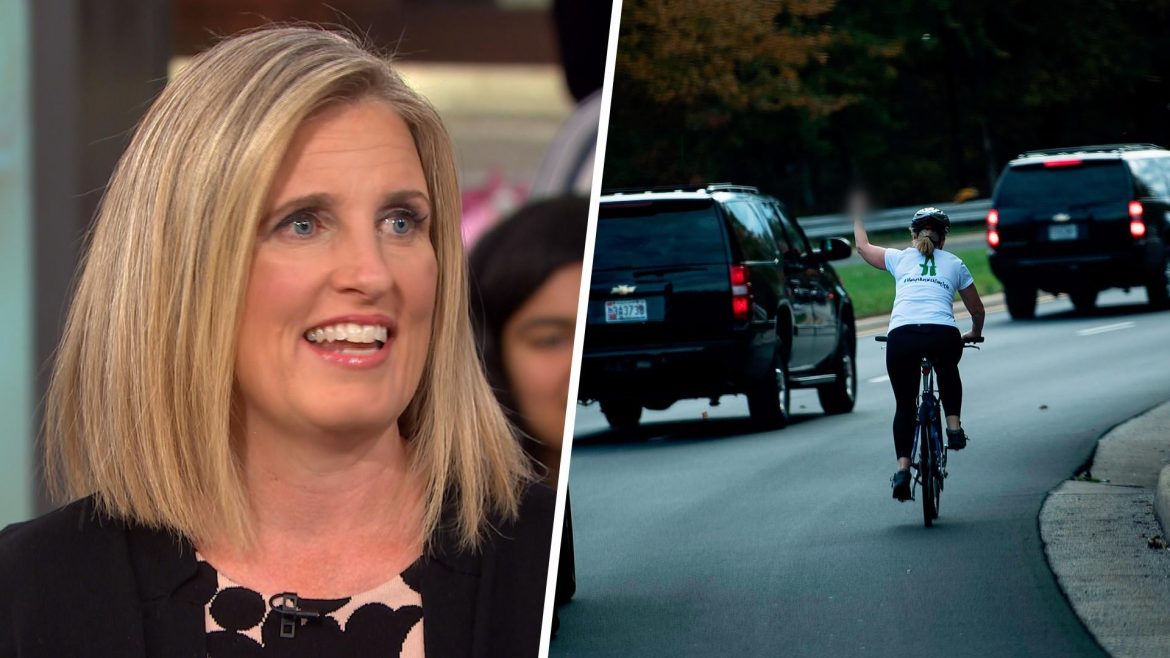 Loudoun Supervisor Juli Briskman, famous for her obscene gesture to the President's motorcade

Letter to Loudoun County Board of Supervisors

Loudoun County Board of Supervisors,

I am writing to you to draw your attention to the events leading up to the Black Lives Matter protest that I witnessed on June 6th, in Potomac Falls, Virginia.

On or about June 2nd, a post appeared on Instagram promoting a BLM protest and march in the Potomac Falls neighborhood, originating in Algonkian Park and culminating into the parking lot of Our Lady of Hope Catholic Church.

It is unclear to me why the Church was targeted as a rally point by local students without the prior consent of the Church. Perhaps because assembling at the local public schools they attend may have resulted in trespassing charges.

Regardless, contrary to the disingenuous remarks by Ms. Briskman on the morning of June 6th, no attempt was made by the organizer to coordinate with Park Officials, the Sheriff’s Department, or the Church in planning this event. Only after the posts were brought to the attention of the Church Pastor did coordination take place which he initiated himself.

Ms. Briskman made the following disingenuous statement on June 6th:

“I spoke with the Loudoun County Sheriff’s Department and the organizer of this event, both of whom assured me that all parties concerned WERE appropriately consulted in the planning of this peaceful protest.”

This statement is clearly contradicted by a statement released by the Pastor of Our Lady of Hope the prior day, on June 5th:

“Our Lady of Hope, Algonkian Park, and the Sheriff’s Department were not informed of this event taking place. We discovered this event on Tuesday through a posting on social media.

Once the matter was brought to my attention, I spoke with the young woman in charge, a local high school student. She said that this gathering would be about 50 – 100 people. They would gather at Algonkian Park, have several speakers, and then march, crossing Algonkian and ending in our upper parking lot.

I then spoke with the manager at Algonkian Park, who was also taken by surprise. He did not have additional details to offer.

Today (Friday, June 5), I spoke with Tom Gilligan from the Sheriff’s Department. He too said that this was a surprise to them. Since the participants are parking at Algonkian Park, he planned on encouraging them to remain in the park, and not leave the park area for the march.”

Clearly the affected parties were NOT appropriately consulted in the planning of this event. Only after the posts were made public on social media and subsequently promoted by students and teachers from local public schools were consultations initiated by the Pastor of Our Lady of Hope.

On the morning of the protest on June 6th, Supervisor Briskman posted a link offering tips and advice for protesters on how to mask their cell phones from law enforcement, a tactic clearly intended to obstruct an investigation of any crimes that might be committed. We have seen numerous acts of vandalism throughout the past several weeks at similar protests in both residential neighborhoods in Cascades and businesses in Sterling. It is troubling that a Loudoun County Supervisor would advise protesters in her own district how to avoid being identified and prosecuted for crimes that they may commit.

I witnessed the events that transpired in the parking lot of Our Lady of Hope Catholic School as a lone elderly parishioner politely asked protesters attempting to park in the Church parking lot to re-locate to Algonkian Park where the rally was taking place in order to allow for parking for the upcoming Mass at 5 p.m.

Nevertheless, the Pastor advised the Sheriff’s Office to allow the protesters to enter the Church grounds. He undoubtedly feared that an ugly escalation would take place if the protesters were turned back.

After the event, Ms. Briskman tweeted:

“Today we had an amazing #BLM march in my district, organized by a high school student. It was an honor to take part & see the youth in my community take a stand.”

What Ms. Briskman characterizes as a “peaceful protest” is quite different from what I witnessed in that Church parking lot that afternoon. What I witnessed was approximately 1,500 privileged teens from Potomac Falls and Lowes Island march into the Church parking shouting “F**k the Police” and “All Cops Are Bastards” over and over and over again in front of the very Loudoun County Sheriff’s Deputies that were there protecting them in front of parishioners, clergy, and worshippers arriving to prepare for the 5 p.m. mass after months of lockdown.

It is ironic that Ms. Briskman championed this assault against the Catholic Church and its parishioners on June 6th – the very day usually revered for remembrance of the true “anti-fascists”: those that died on the beaches of Normandy seventy-six (76) years ago defending individual liberty, the right to free speech and the right to worship.  Instead she chose to champion a privileged teenage mob verbally attacking worshippers under the guise of a peaceful protest using their 1st Amendment rights to infringe on the 1st Amendment rights of others to worship.

Ms. Briskman’s disingenuous actions are a betrayal of public trust and are certainly not the expected actions of elected officials. In a time of crisis, working to further widen the divide only works to serve her political ambitions, while ignoring integrity and her responsibility to protect and defend private property rights.

Only a swift apology to all those who were trespassed upon will work to heal the fractures in our society.  Ms. Briskman and the Board of Supervisors should apologize to both the Pastor and the parishioners of Our Lady of Hope Catholic Church as well as to the Sheriff’s Deputies that were there that hot summer afternoon protecting both her and the protesters that were verbally assaulting them.

Paul Kershaw is a former marine, a resident of Loudoun County for 20 years. He is currently in Aviation, Transportation and Logistics. Paul is married with two teenage children.