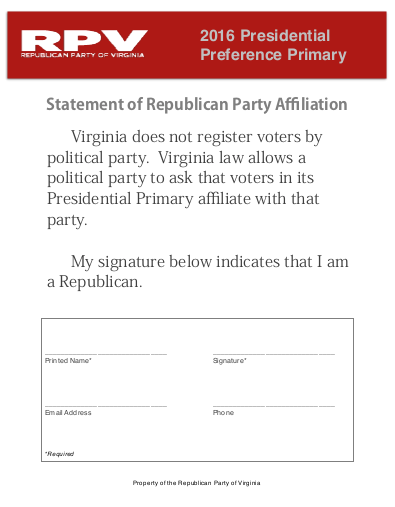 Letting Go of the Statement of Affiliation

For such a simple thing, there is a whole lot of misinformed editorializing about RPV’s 2016 Statement of Affiliation.

Since this horse has been beaten to death, I won’t belabor the background details. Back in September, the RPV State Central Committee adopted a provision allowed by the Virginia statute governing presidential primaries to require those participating in the March 1, 2016 GOP Presidential Primary to indicate they are indeed Republicans.

All of the top presidential campaigns, including Donald Trump’s, were allowed ample opportunity to comment or object before the measure was brought to a vote. None offered any objections…until Donald Trump’s tweets from last Sunday led the way in week-long frenzy of misinformation and disinformation.

Allow me to fix some of that.

1. It’s not a “pledge” or a “loyalty oath.” It’s exactly what it says it is…a statement that the person signing it is a Republican. Mick Staton is right that the Virginia GOP is constitutionally allowed, pursuant to its First Amendment right of free association, to exclude non-Republicans from their internal processes. By way of context here is how a pledge might read:

Instead we have a statement of affiliation:

My signature below indicates that I am a Republican.

2. TBE guest contributor Brian Landrum is completely wrong that requiring a statement of affiliation is an unconstitutional infringement on other people’s right to freedom of association. For the love of all that is holy, when you feel wronged by an action touching on a governmental process it does not automatically become a Constitutional violation, unless you believe in a living breathing Constitution. The Republican Party is a private organization, and as illustrated by a long line of Supreme Court cases, no one can force them to include non-Republicans in their nomination processes. Non-Republicans in such situations do not have their rights violated by that, as they are still free to associate…by becoming Republicans.

3. Shaun Kenney is absolutely right when he says we could have avoided this had we chosen to bind our delegates by the convention process, as Virginia has historically done.

4. Donald Trump and TBE guest contributor and radio talk show host John Fredericks are wrong when they state that the requirement is aimed at suppressing Trump votes. This criticism misses the more relevant context, which is the perennial convention versus primary debate among Virginia Republicans. Requiring some sort of filter in a process otherwise open to Democrats and other non-Republicans has been a way to split the difference…to hold a primary with one of the attractive features of a convention. That does not suggest that it is effective at its purpose. Intent and effect are not correlative.

5. State Central Committee member Mike Wood, and conservative leader Russ Moulton, are right on their facts when they each make three similar arguments: (i) that the statement instituted by the State Board of Elections is different than what was passed by the Virginia GOP.; (ii) that the SBE has refused to allow the party to reclaim the forms to gain the voluntarily-provided email addresses and cell phone numbers; and (iii) that the statement puts RPV at odds with certain requirements of RNC rules. Given that others have claimed these arguments were entirely false–and they were even made up for political purposes–I’ll address each of these arguments in turn below.

6. The form adopted by SBE is indeed different than what was passed by the RPV State Central Committee. See for yourself:

The SBE changed the form to this: 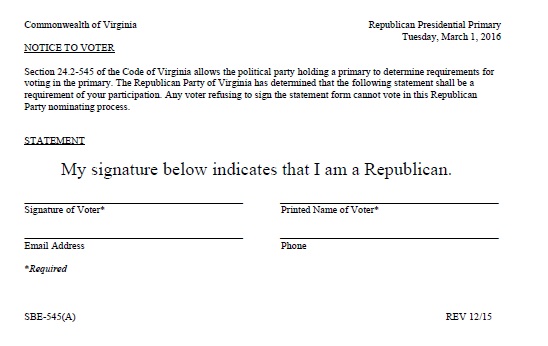 Of the original 47 words plus a signature block, only the signature block and the nine core words remain: “My signature below indicates that I am a Republican.” SBE removed the title of “Statement of Republican Party Affiliation”; removed the RPV logo; removed the caveat that the sheet was “Property of the Republican Party of Virginia”; and inserted SBE legalese and formalisms. How much you think this matters depends on how important the branding and other language was to getting SCC members to adopt the form in the first place. Regardless of the legality of the form as approved by the SCC, the SBE should not have rewritten the form. The Party volunteered to cover the costs of having copied for each city and county around the state.

7. The SBE has (so far) refused to allow the party to reclaim the forms to gain the voluntarily-provided email addresses and cell phone numbers. This was part of the reason the now-removed “Property of the Republican Party of Virginia” language was inserted, which was to make clear both to the voters and the SBE that the Party’s view was that this document was not to be regarded as elections material, but instead as property of the Republican Party. My understanding of the current situation is that the revised forms would only be available to the Party through FOIA actions with each Clerk of Court’s office around the Commonwealth, where the documents would be locked away with other official election materials. I also understand that SBE is meeting again later this week, and that the issue may come up again then. As someone who deals with Virginia FOIA on a relatively consistent basis, I am not remotely surprised that the SBE is refusing to allow access to the signed forms.

8. The statement is in plain violation of the requirements on RNC Rule 16(d)(2). This rule requires that state parties instituting new requirements for participation in their delegate allocation processes must publish in a newspaper of general circulation a notice of such new requirements at least 90 days in advance:

No such notice has been published. Now, there are arguments about why the statement of affiliation should not be considered an “additional qualification” as understood by this section, but I think the better reading results in an opposite conclusion. A “Statement of Republican Party Affiliation” has never been used before, has never been a requirement for participation in any Republican processes, and is not a requirement for participation in any other GOP processes this year. Thus, the absence of publication is a clear defect. Despite a clear violation, this is unlikely to result in negative consequences for Virginia’s delegation to the national convention (particularly when, with plenty of press coverage of the issue, no one can argue they would have been better informed had RPV bought a $250 classified ad to announce the new requirement). Moreover, unless one candidate piles up a huge plurality of Virginia’s delegates, supporters of other candidates with a possibility of getting the nomination will be reluctant to support throwing the entire delegation out, including their own delegates.

Even so, some potential risk remains. If there is a contested convention in Cleveland, this shortcoming will almost certainly attract attention of people on the RNC Credentials Committee who may be looking for ways to handicap the candidate who wins the plurality of Virginia’s delegates. RPV has good arguments about why the delegation death penalty would be unjust and disproportional, but with the nomination of the next President of the United States potentially hanging in the balance, we cannot be assured that a politically-motivated hit job against our delegation would be deflected by such equitable arguments.

9. Some observers have suggested that RPV cannot reverse course on this without an additional vote of the State Central Committee. That is untrue. Given the substantial differences between what was passed by SCC and what was adopted by the State Board of Elections, and given the technical defect under RNC Rule 16(d)(2), RPV Chairman John Whitbeck has ample standing to either state the action by SBE is not authorized by the SCC and therefore is invalid, or that the action has now become inconsistent with the RNC rules and is therefore not authorized by the Party. In either case, the SBE would likely gladly rescind the requirement.

And we are left with an opinion of what to do. One supported by facts, but an opinion nonetheless.

It’s time to let it go, and Whitbeck could do that today…

Letting Go of the Statement of Affiliation was last modified: January 5th, 2016 by Paul A. Prados
loyalty oathpledgeStatement of affiliationTrump
45 comments