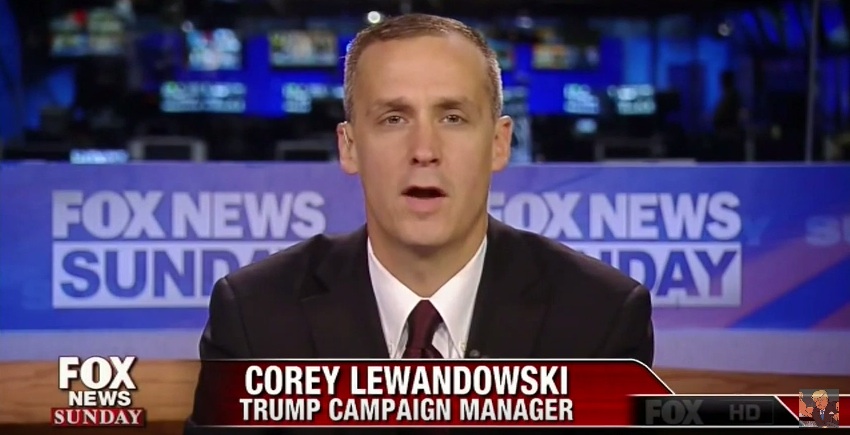 Lewandowski OUT as Trump Campaign Manager

“The Donald J. Trump Campaign for President, which has set a historic record in the Republican primary having received almost 14 million votes, has today announced that Corey Lewandowski will no longer be working with the campaign,” the campaign spokeswoman, Hope Hicks, said in a statement. “The campaign is grateful to Corey for his hard work and dedication and we wish him the best in the future.”

Mr. Trump had faced increasing concerns from allies and donors, as well as his children, about the next phase of the campaign as he pivots toward a general election.

There has been a power struggle in the Trump campaign ever since ‘The Donald’ brought in veteran strategist, Paul Manafort, to run Trump’s convention delegate strategy (which doesn’t sound like it’s going well with the stories about a delegate revolt gaining strength).

Lewandowski had been working behind the scenes to block Manafort’s influence and prevent some of his people from gaining key spots in the Trump campaign organization, but it looked like it wasn’t enough.  No word yet on whether Manafort will slide into Corey’s old spot, but that is the probable move here.

Removing your campaign manager at this stage of the game is not a good sign for any campaign, and with Trumps 70% unfavorable rating, combined with his deficit in the polls, his lackluster fundraising, and his organizational deficit to the Clinton campaign, we may see the party write off the top of the ticket early in the game this year.  Such a move would spell the end of the Trump campaign, as he has made it clear he expects the party to do the heavy lifting for him when it comes to raising money and organizing a ground game.

According to Twitter, Lewandowski was escorted out by security. That means that he was getting violent or Trump decided to fire him in the most tacky and humiliating way possible.

Either way, this is bad for Trump no matter which way you slice it. Combine this with terrible fundraising numbers? Yup, Trumptanic is sinking fast.

Corey did his job now it is time for Paul to put Trump over the top. Don’t here much today about the silly chicken littles trying to amend the rules so they can vote their…whatevers. Ryan is not our friend and those of you who are swayed by him need to pay closer attention. How big is Hillarys lead in Virgina? 3% is that within the margin of error, how about Ohio, Florida, Pennslyvania.. looks good to me!

I almost lol when I hear people talk about “the Trump campaign.” There’s no campaign. There’s Trump traveling around appearing at increasingly tired and small “rallies.”

I just heard that Paul Manafort gave Trump 48 hours to fire Lewandowski or he would quit the campaign. Trump’s kids who work on the campaign sided with Manafort so Trump let Lewandowski go.

When the stories with unspecific headlines began breaking this morning, I’d hoped it was Manafort. Lewandowski was rather one dimensional and “what you see is what you get” by comparison. Manafort strikes me as having more stinky layers than a slimy onion!

That’s a sign of weakness. What would happen if Putin or China gave Trump a 48 hr. or else ultimatum?

What, would Trump then ask his children what to do?

What a joke this is.