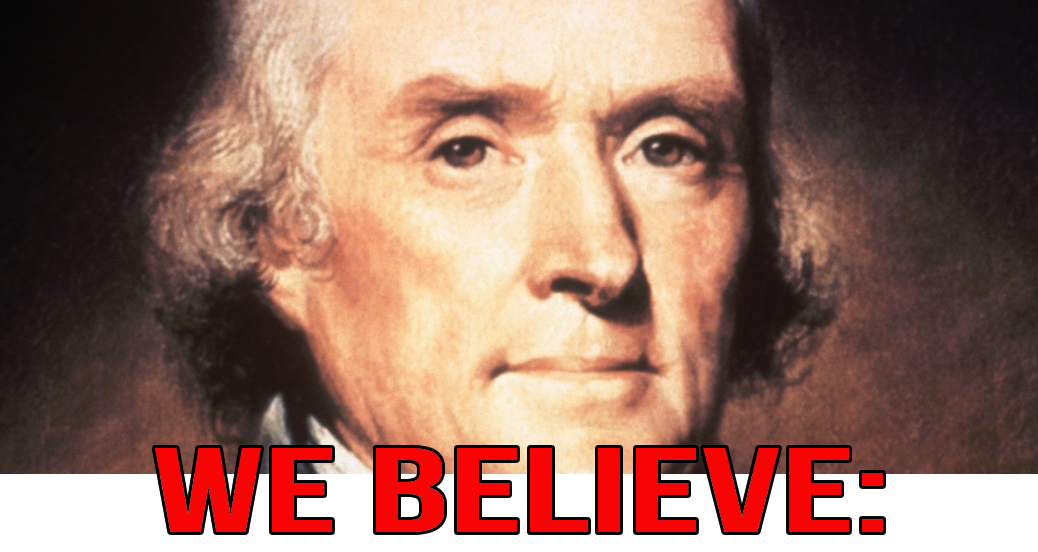 In most places around the country, in federal, state, and local discrimination laws it is unlawful to discriminate on the basis of race, color, creed, national origin, ancestry, sex, age, genetic information, military service, or disability. Conservatives are fully on board with this.

But, it appears that liberals are trying to cut that list down by one—creed. Creed sometimes is a religious point of view, but more broadly means “a set of beliefs or aims which guide someone’s actions.” In effect, one’s conservative or liberal values are one’s creed.

The liberal whack-a-doodle haters in this country are looking to remove this as a protected part of free speech and association. The toxic core of these haters denied the President’s Press Secretary and her family a meal over the weekend based on her creed.

Maxine Waters, a truly disturbed carrier of Trump Derangement Syndrome, fueled by hatred said: “Let’s make sure we show up wherever we have to show up. And if you see anybody from that Cabinet in a restaurant, in a department store, at a gasoline station, you get out and you create a crowd. And you push back on them. And you tell them they’re not welcome anymore, anywhere.”

Another restaurant by the same name as the one that dissed Ms. Sanders was quick to point out that “We are not affiliated with the restaurant in Lexington; this is not a franchise. We serve whoever walks through our door, no matter their race, creed, sexual orientation, political party or whatever.”

There is that word again—creed. Where did it come from in political discourse? Creed entered the political lexicon in 1866 by a Republican advocating for civil rights, as we always have.

Senator Roscoe Conkling, a leading abolitionist, said on the Senate floor that in order to reintroduce southern communities into the Union, certain measures much be guaranteed and one of those was “the assurance of human rights to all persons within their borders, regardless of race, creed or color.”

The hatred is becoming the mainstream of the Democratic Party. The violent, in-your-face mantra of left-wing ideological repression threatens the bedrock American ideals of a free political marketplace where we can reason together as individuals.

Anyone who fails to express constant disdain and acrimony about President Trump, let alone provide support and encouragement, is deemed a “threat to the Party” and our collective national identity. Ring a bell?

Which political collective in the last century would be identified by those ideas? Communism? Socialism? Fascism? Pick one; it doesn’t matter because there is not a lot of difference between the three. The common thread they all share is that they are polar opposites of conservatism.

Creed is a required part of our diversity and free speech protections. Democrats are quickly eroding them by demagoguing any creed that is not theirs. We define that as intolerant. Democrats being intolerant is hypocrisy and that seems to be where all roads lead with the Democratic Party today.

They have no plan, no vision, no new ideas, just vile hatred, intolerance, and hypocrisy. Americans need to look elsewhere for diversity—diversity in people, diversity of ideas, diversity of solutions. You will find those ideals in the creed of the Republican Party and President Trump.

It’s certainly nice that Goodlatte and Cline invited Ms Sanders back to Lexington. But where are Virginia’s so-called statewide leaders on this matter? Where is Governor Ralph “Quack Quack” Northam? Where is the General Assembly leadership in both parties on this?

Should Virginia’s public accommodation laws be expanded to demand at least the amount of tolerance demanded in Washington, DC and Seattle?

Ha ha. I’m not sure why Congressman Goodlatte would be involved with what would have to be a state law in Virginia. I’m glad they’re sending invitations to Ms Sanders but it seems more like the state senator and local state delegates would be more useful in trying to persuade people that Lexington isn’t just a small southern version of Queens. Goodlatte is a carpetbagger anyway. Maybe stick with Cline.

As for the legal weed, bring it on. Most Virginians support it anyway. Maybe Northam could start paying for some of his precious social programs without the “hospital care assessment” or the hidden lack of conformity with federal tax law that he’s using now. Or, we can continue to finance the drug cartels so they can terrorize Mexicans and South Americans into illegally immigrating to the US and joining the absurd number of drug related prisoners in our prisons and jails. Yeah, that war on drugs sure is working well. I can’t think of anyone anywhere in Virginia who can get marijuana illegally. Heaven forbid that stoners buy the stuff legally and pay taxes to the state.

Have been reading “The Big Lie” by Dinesh D’Souza….
Real question is how do we fix this “clear and present danger” being caused by democrats ???

Oh “they” have a plan and don’t forget it;

The One World Citizen

They do not believe in
American Exceptionalism.
I think we do, I know I do!
***America First***

Yes, the “one-world citizen” and the ruling class. Progressive elites believe they will be part of that and the rest of us will have whatever the government deems we get. First clue: Congress declared themselves immune to the ACA.

Liberals are all about free speech until you say something they don’t like. Or if they need to push their pet agenda on you… gay marriage for example.

They love to virtue signal though especially on social media.

They use social, emotional issues to get voters. What’s behind that is socialism. Their supporters have no idea.