What will libertarian candidate for Virginia governor Rob Sarvis’ legacy be?  Will he be remembered as a hero for stepping up to the plate, or known several years from now by Republicans and effected libertarians as a person whose sole opportunistic achievement was diverting enough votes from the Republican candidate to elect a Democrat?

My bet is on the latter because as much as the libertarians are pissed off that Ron Paul didn’t take over the Tampa convention, and that Obama is still the antichrist—here in Virginia, they WILL be directly impacted with a Democrat back in the Governor’s mansion. 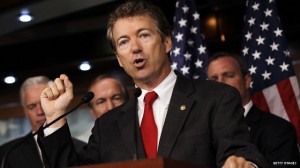 Rand Paul was smart enough to break away and not follow in his father’s footsteps.  Rand instead has chosen to bridge the gap with the GOP, laying needed groundwork for the 2016/20 big show.  Rand has fought hard and moved up the ranks, learned the processes, paid his dues, paved a path and created a history.

Sarvis, is 36 years old and married with kids.  He has spent 25 of those years in school collecting degrees.  He has no practical experience and while I respect him, he is really nothing more than that college kid trying to get a top level job at your office while you slave and grind away wondering how you are going to pay for your kids braces, afford healthcare, pay your mortgage or take the family on vacation.

Here is the reality.  Whether a liberal, conservative, independent or libertarian, regardless of what religion or nationality—no one likes some smart ass college snot stepping over us at work to be our boss and/or run the department or the company.  They know nothing of the inner workings, they will make decisions which impact those in the ranks—those that don’t bask in the glory yet work their ass off in jobs which should pay more, and finally, that kid with no experience can have a major impact on your future with that company.  What is any different here folks?

You wouldn’t like some college kid with no experience becoming your boss at work, why would you want it for your State?  Because he claims to be a libertarian?  Very shallow, my libertarian friends.

Or, for those who make over $150K/yr.  You are a mid to high level manager in your organization and have worked hard in your field to get there.  A title, office, staff, perhaps transferring from job to job to gain the experience and background on your resume… now this college puke with no experience is interviewing to be your boss or even the President of the company?  No experience, just a lot of degrees which you know do not mean anything in the real world.  Care for that?  Of course not.  So why allow this kid Sarvis to have a pass just because he claims to be libertarian?

A VOTE FOR SARVIS IS A VOTE FOR MCAULIFFE
The ONLY goal here in Virginia must be to prevent Terry McAuliffe from becoming Governor.  The ONLY way that can occur is to elect Cuccinelli.  Then Sarvis can run in and win a local district election, get some practical experience serving his community in a government role and move him up the ladder with confidence that he can gain support outside of the libertarian community, just like Rand.  He will have 4 years to do so.

If you are libertarian, stop looking for the next world savior—it’s not happening.  But if you want a libertarian-minded candidate to reach the top in Virginia, there has to be a plan, not just a candidate.

Rand Paul was smart enough to know that you can’t attempt to ride the GOP ticket to the big show without bridging some gaps.  Equally, when push comes to shove, the goal for all non-Democrat Americans in 2012 was to rid this country of Obama.  To reach that goal, Rand supported the only candidate who could win against Obama. Unfortunately his father failed the American people and did not drive this to occur himself.  He took his ball and stomped off and Libertarians following daddy were left to sit at home and watch Obama win again when they should have united AS AMERICANS to rid us of Obama.  Don’t let this occur in Virginia.

Let’s wise up Libertarians.  Stand and fight with a plan.  Create a small win now and show your strength by preventing your worst nightmare, a liberal Democrat, from being in charge of Virginia.  Then you will see if Sarvis was just a one-hit wonder or really wants to help his community long term—if so, support Sarvis over the next few years so he can run for delegate, senate, AG or Governor and have a real chance to make an impact.  The alternative should be unacceptable to you.